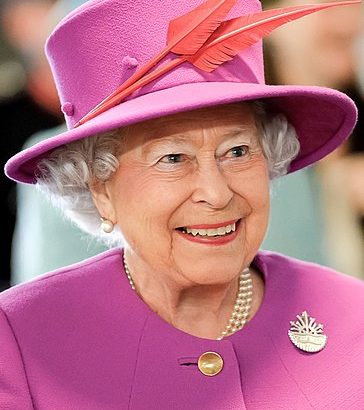 Marcus Aurelius was ruler of the Roman Empire at arguably its height of power and prosperity. He nevertheless saw himself as a mere man, one compelled to be Emperor, and in no way greater than the common people. He just happened to be Emperor, and in the power vested in him, he defended Roman territory from invasion, provided for the common good of the people through natural disasters, and engaged in more civic improvement projects than any other Roman Emperor. He used the power granted to him for good.

Elizabeth Alexandra Mary, daughter of George and Elizabeth was symbolic head of state of the United Kingdom at unarguably its descent from empire. She nevertheless saw herself as a mere woman, one who unexpectedly became Queen (see Edward VIII), and in no way greater than the common people. She just happened to be Queen, and though she had no real political power, she provided for the common good of the people as a stable presence, even if only ceremonially. She used the power granted to her for good.

I lived in the United Kingdom from 2012 to 2018 when I earned my PhD in social and political philosophy and taught there. I enjoyed living there, but that nation has been in almost constant crisis for decades, wracked by, among other things, its loss of empire, and its ongoing reluctance to sufficiently deal with the damaging legacy of its colonialism. It is a nation consumed and self-harming by its own divisions.

Queen Elizabeth was both outside of these traumas and a target of them. She saw herself as simply a servant of the people. In truth, she was a symbol of the nation and the symbol of other people’s desires. As one commentator so aptly expressed, if the Queen were standing in front of a building, and you loved that building, you loved her for standing there, but if you disliked that building, you were angry at her for standing there. People projected onto the Queen their own emotions.

The irony is that the Queen never expressed a political opinion. Never. As another commentator put it, she was so familiar and yet so unknown as to what she really thought about the nation’s divisions. For good or for ill she felt her duty was to be politically neutral — she just happened to be Queen, she wasn’t an elected head of government. Perhaps the closest she ever came to a political statement was her outfit during a speech to parliament after the Brexit vote.

And yet, her neutrality did not stop some people from using her as a prop for their own political prejudices. She saw herself as their servant; they saw her as a mere object.

However you feel about the United Kingdom and the concept of monarchy, Elizabeth Alexandra Mary was a person. As every other person, she deserves to be treated as such. The vile posts on social media after her death from the Fake Left and the racist responses from the Reactionary Right do not reflect the person who was Queen, but the patheticness of the people spewing hatred.

As always, hatred is a projection of how people see themselves, A self-hatred that causes people to see others negatively to soothe their own feelings of inadequacy. Those spewing hatred of the Queen are not seeing her for who she is but as a token object to be exploited for their own agendas.

Similar to what I wrote years ago about Trump, if you think Queen Elizabeth or the monarchy is the problem, you aren’t part of the solution. She didn’t create the Empire and she didn’t commit its crimes. She just happened to be Queen at a time when the empire was falling apart. Any righteous anger you have about colonialism should today be directed at the corporations and their political demagogues who are perpetuating colonialism. Attacking the Queen is attacking the wrong target and says more about you than anything else.

As for the right-wing demagogues who lionize the Queen as the symbol of Empire — they are no better. Again, she didn’t create the Empire and she didn’t commit the crimes these right-wingers want to continue to commit. Using Elizabeth as a symbolic backing of corporate greed and structural oppression is as vile as those spewing hatred against her.

What is my opinion of Queen Elizabeth? I never met her, but from all appearances, she was a good person who did her best with what fate dealt her. We can debate whether she could have done this or that, but there is no reason to hate her nor any reason to use her. Like Marcus Aurelius, Elizabeth knew who she was and what her limits were. As Marcus Aurelius said, death dealt the same with both Alexander the Great and his mule driver. Now, a person has died; she just happened to be Queen. How she saw herself and other people mattered. For that, she was a good person.