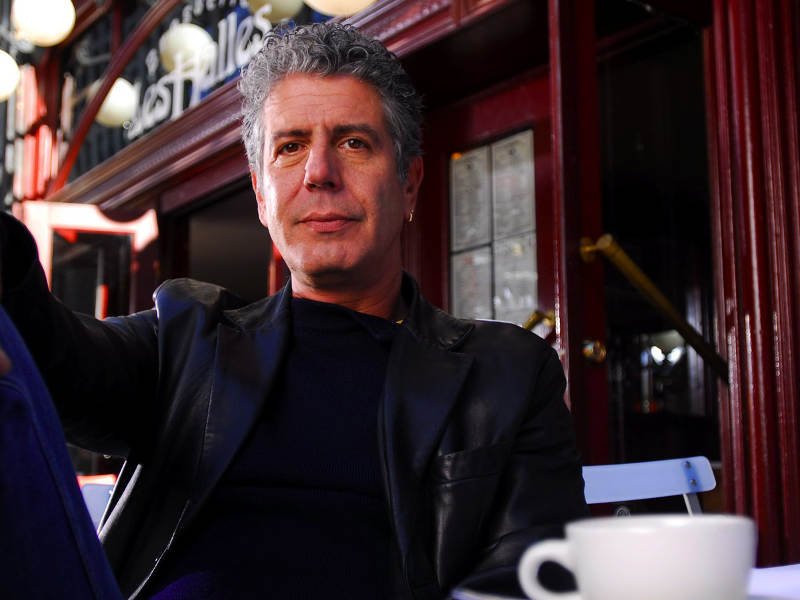 The eulogies, tributes, and expressions of dismay and gratitude came quickly after the shocking news of Anthony Bourdain’s death. The many eloquent and wonderful things that were said about Bourdain I do not need to repeat. In all of those expressions of praise and loss, though, I fear one key element of Bourdain’s message was forgotten.

Much has been said about Bourdain’s irreverence, his go-anywhere, eat-anything spirit, and how he brought to light so many places and foods. These are part of who Bourdain was and what his shows were about. What is missing from these write-ups is one of Bourdain’s passions: his searing and abiding hatred of what big money corporatization has done to us all. The commentators didn’t want to address Bourdain’s anger about the forces that were destroying our food, our planet, and us. Those corporations don’t advertise here, so I am free to talk about it.

The War Against TGI McFunsters

The first time I ever heard of Bourdain was on a commercial for his (then) new show, No Reservations. The commercial promised a new kind of travel show that was about being a traveler not a tourist. That sounded interesting to me. The first episode of No Reservations was Bourdain’s manifesto. Don’t just go where the guidebooks and the mega-corporations tell you to go. Find the real heart of a city. Find a nice cafe, sit down, and eat a ham sandwich. Really EAT a ham sandwich.

Bourdain’s message was threefold. One: Don’t just consume food, ENJOY food (same with life). Two: Don’t follow the herd. Get off the tour bus and go your own way. Three: Don’t give your money to the corporate chains, give it to someone who puts their heart and soul into the food they create.

Too much of this message was ignored by the many writers who penned retrospectives after Bourdain’s death. The first point was touched on, definitely, but the second point was mostly ignored (Rolf Potts being a noble exception), and the third one neglected. The Bourdain quote most often cited in the obituaries was this from his first book:

“Do we really want to travel in hermetically sealed popemobiles through the rural provinces of France, Mexico and the Far East, eating only in Hard Rock Cafes and McDonalds? Or do we want to eat without fear, tearing into the local stew, the humble taqueria’s mystery meat, the sincerely offered gift of a lightly grilled fish head? I know what I want. I want it all. I want to try everything once.” (Kitchen Confidential: Adventures in the Culinary Underbelly)

The obituaries focused on that last underlined part. “Bourdain the rebel. He wants to try everything!” Bourdain’s true rebellion was not in being adventurous but in his speaking out about why we are not adventurous. 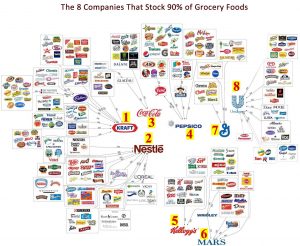 Bourdain urged us to experience the joys of really experiencing something. We don’t do this, Bourdain not so subtly implied, because we are too busy being shepherded through life by corporate interests. “TGI McFunsters” was Bourdain’s shorthand for corporate evil. Bourdain the chef was primarily angry about how corporations had lowered the quality of food. Big corporations like Kraft, Purdue, Tyson, Nestlé, Unilever, Coca-Cola, and PepsiCo have ripped the heart and soul out of food. In their greed for profits, they have cut corners on quality, reducing what they sell to bland commodities targeting the lowest common denominator.

The TGI McFunsters of the world have inflicted the same on dining out. Food is a commodity, not a creation, at places like McDonald’s, Chick-fil-A, Olive Garden, and (of course) TGI Fridays. Accountants and marketers, not chefs, create the menus. Then there are the frankenbistro monstrosities like Planet Hollywood and Hard Rock Cafe that don’t really sell food; they sell an “experience.” They insult the intelligence of its customers by offering gimmicks and glam and pre-fab foodstuff wrapped up in a marketing plan and an opportunity in the gift shop to buy T-shirts to become a billboard for the corporate chain. This is the food purgatory that corporatism has brought to us.

The Answer to the Corporate Machine

Bourdain’s message is more than a rage against the corporate food machine. Bourdain offers a solution: passion and obsession. I posted a few months ago one of my favorite Bourdain quotes: “Obsession is the natural foe of mediocrity.” Those who create something wonderful can do so because they have persistently and single-mindedly poured their energy into the tasks needed to create it. They create something wonderful because it comes from them and they put their passion into it. That is why the corporate food assembly lines produce mediocrity. They lack passion and obsession (aside from making money), and they are detached from what they produce. 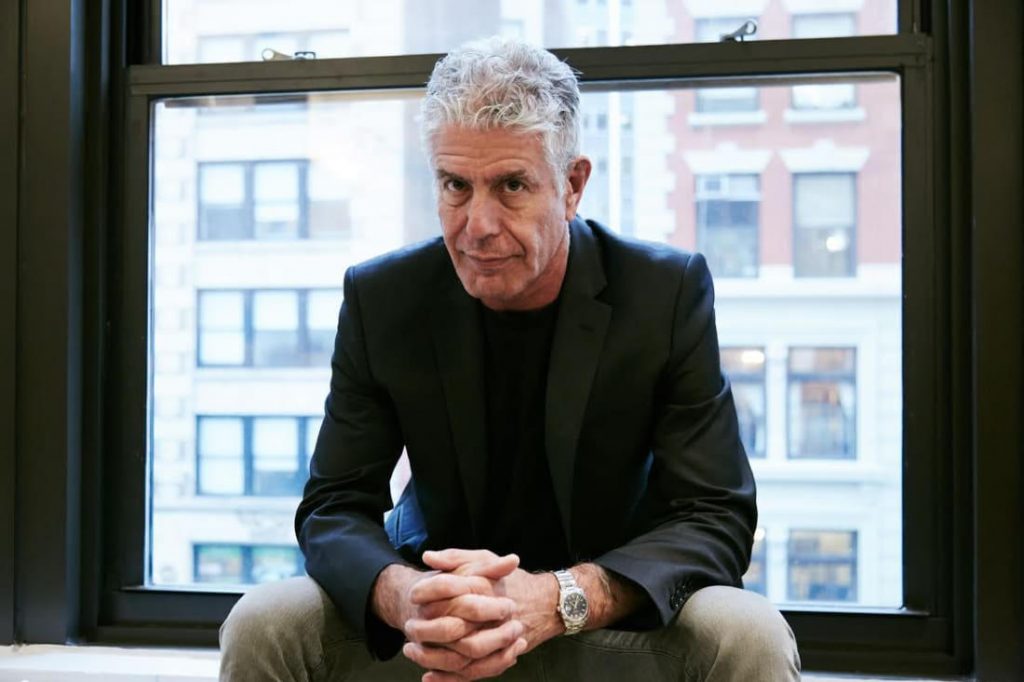 When asked his thoughts about the New Your City restaurant scene, Bourdain responded that it was good because “young people all over the city and all over the country [are] making their own sausages, curing their own meat, and rotting things in their cellars, and they’re acutely aware of the seasons and are aping obscure subgenres of like Basque-specific restaurants. It is a wonderful thing.” (2016 Business Insider interview)

Innovation! Creativity! And not just finding a new way to market something—discovering a new something worth sharing with others! It also means asking questions and being willing to be different. As Bourdain said: “Without experimentation, a willingness to ask questions and try new things, we shall surely become static, repetitive, and moribund.” (Medium Raw: A Bloody Valentine to the World of Food and the People Who Cook)

Bourdain’s message against corporatism was directed at more than the food industries. He also spoke out against the pharmaceutical industry:

“Look, large corporations track their sales very carefully. If you’re pumping in millions of highly addictive narcotic pills to one tiny little town, or one tiny little state, you know what you’re doing. There’s no question, okay? In what way are they different from some corner boy in Baltimore slinging dope? I have a little more sympathy for the corner boy than I do for some billionaire, who’s already doing quite well, knowingly selling narcotics far and above any reasonable or acceptable level of need.” Source

The common themes in Bourdain’s criticisms of corporations were their disregard for people’s well-being, their willingness to put out any product to make money, and how marketing of corporate brands manipulates people’s perceptions. The TGI McFunsters convince people that their bland and empty corporate products are acceptable, if not desirable.


Corporate marketing can succeed because there is a human tendency to believe what we are told. Bourdain was aware of this tendency and sought to challenge our preconceptions. In his very first episode of No Reservations, he began the show telling us to set aside our view of the French and look at them for who they are. In all of Bourdain’s shows, he confronted our assumptions and stereotypes by showing us the real city, the real countryside, and the real people. His goal, he said, was to “show regular people doing everyday things, cooking and enjoying meals, playing with their children, talking about their lives, their hopes and dreams.” (Anthony Bourdain: MPAC Media Awards)

Bourdain understood that seeing real people living their real lives, and enjoying their food and drink with them, was the best way to understand them and make connections with them. And, of course, Bourdain introduced us to the chefs and artisans who create food, craft meals, and give us something wonderful. Too many articles erroneously refer to Bourdain as a “celebrity chef.” Bourdain didn’t cook for us on his shows, he paid homage to others who did cook while he derided the corporations who don’t cook, not really. Bourdain’s message in his shows was that we should honor and respect those who create, not those who simply sell.

I was in a cafeteria in Helsinki working on an article for this site when I saw the news that Bourdain was dead. I travel a fair amount—50-90 days a year—and Bourdain’s “be a traveler, not a tourist” has been a guide and inspiration for how I travel. Bourdain’s message has also inspired this site and how I view the world. When I travel, I always eat and drink at the local establishments, run by locals, never the corporate chains or frankenbistros. When home, I shop locally, frequent small businesses, and spend my money with people who create and put their personal pride into what they do. Shopping locally means the money will stay in my neighborhood and help my neighbors, not some distant corporation. Buying from artisan producers and small businesses is a good practice for us all that helps us all. I think it is a part of what Anthony Bourdain tried to tell us that is more important than rough travel to exotic places, eating weird food, or hard drinking.

Bourdain checked out when the world needed him and his message more than ever. His death reminds us that we never actually know famous people; we only know what they show us. Bourdain took us around the world, not to entertain us with glitz and flash, but to educate us on how there was so much more world than we were being shown, including where we live.

I leave you with the closest thing Bourdain offered as his philosophy of life, something at the heart of Bourdain’s message and something we should all consider.

“Life is complicated. It’s filled with nuance…. The root cause of all life’s problems is looking for a simple fucking answer.”

The best article about Bourdain’s life that I have seen.