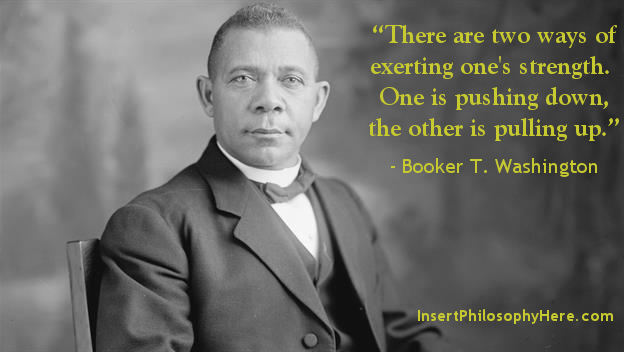 “There are two ways of exerting one’s strength. One is pushing down, the other is pulling up.”
-Booker T. Washington

There are multiple ways to look at strength. Too often, people only look at it in terms of either brute force or resiliency in the face of pressure. Strength is power and power is a relation between two things: that which projects power and that on which the power is projected. Booker T. Washington understood this truth when he pointed out the two possible power relations. One power relation is to push down–literally to push other people down. As an African-American, Washington knew all to well how that relation of power was projected down on him and people like him by the white supremacist social institutions of his time. The other power relation is to pull up–literally to help up other people. This power relation, Washington also knew very well as he and others tried to pull up African-Americans who had been pushed down by racism and segregation. The moral that Washington is trying to get across is that you can choose to use your power to hurt or help others.

Some comedians talk about something similar. They talk about humor that punches down and humor that punches up. Jokes that are at the expense of the powerless, such as mocking the poor, are punching down. Jokes at the expense of the powerful, such as making fun of the rich and famous, are punching up. Some comedians think it is okay to punch up but never to punch down. Even jokes are expressions of power relations. The language people use has meanings. Meanings don’t exist in a vacuum but within a social context. Freedom of speech is a right, but there is no freedom or right to use one;s strength to push down and harm others.