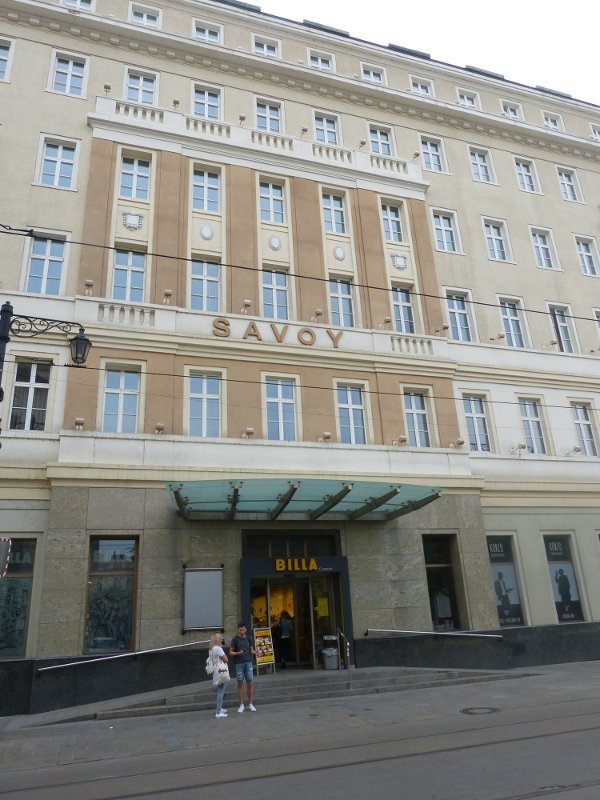 Traveling from Prague to Krakow, we decided to stay a night in Bratislava, Slovakia. It was not too far out of the way–a pleasant train ride through Czech and Slovak countrysides. Maybe it was an unfair comparison having come from magical Prague, but Bratislava felt a bit run down and sad. 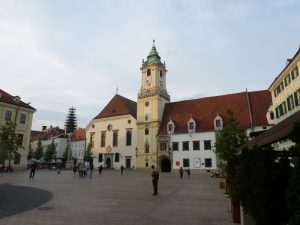 Bratislava does have its charms. It has never been a seat of power or a capital city, but it was part of the Astro-Hungarian Empire and because it is very close the then capital, Vienna, it was never in the hinterlands. 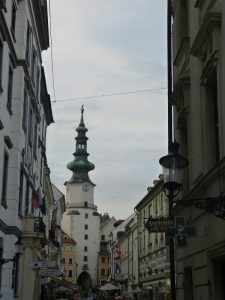 So, it has some beautiful buildings, and it has a small but nice old town.

To the right is Michalska (Michael’s) Gate, the one remaining medieval gate to the old town. To the left is a municipal building that we neglected to get the name. You may notice in both photos how few people were about. 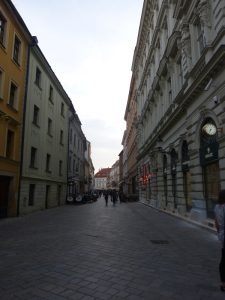 Granted it was a Wednesday, not a weekend, but it was a lovely spring day and we were quite surprised at how few people were about in the old town. The crowds all seemed to be in the modern parts of the city with its traffic jams and chain stores in drab buildings.

In the old town, aside from a massive group of Chinese, there were few tourists and some but not too many locals. This was great for us as it meant it was easy to get a table at a restaurant and the service was fast. Good food is plentiful and not inexpensive. Several excellent pubs too.

Still, we couldn’t help but feel that so many of the locals seemed sad or grumpy and that Bratislava was a city past its prime. Maybe we caught it on a dull night, but Bratislava seemed to be summed up by this image: 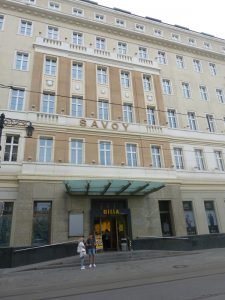 That is the former Carlton Savoy Hotel. It’s founder was the victim of bad timing, opening the hotel in 1913 a year before Europe plunged into war. No one then could have imagined that the grand hotel would become what it is now: a grocery store.