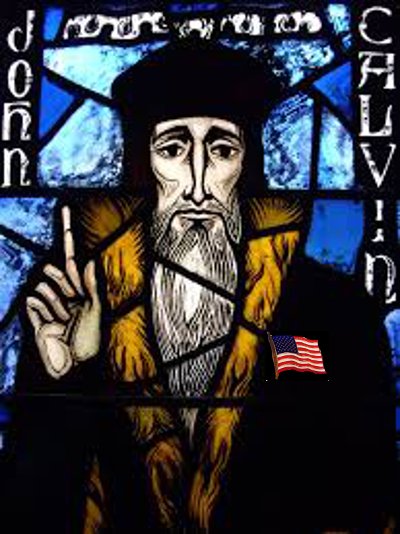 Largely underestimated is the significant influence that John Calvin has had on culture in the United States. Perhaps only John Locke has had more philosophical influence on the American Zeitgeist than has Calvin. To understand America and its uniqueness, you need to understand Calvin’s unique ideology and how his Calvinism has shaped America.

American conservatism has a distinctive character. Only the U.S. could create the vitriolic parochialism of the NRA, the Moral Majority, the Tea Party, and Trump.  You may think that the hostile attitudes of these groups are backward throwbacks. You’d be correct. The reactionary worldview of today’s American right-wing has its roots in the “Puritans” of the 1600s and even before that in Switzerland in the 1500s. What we see in the vitriol is a manifestation of the ideology of Calvinism.

John Calvin was a political leader (he was never consecrated as a pastor) in Geneva, Switzerland in the 16th century who invented his own version of Christianity. 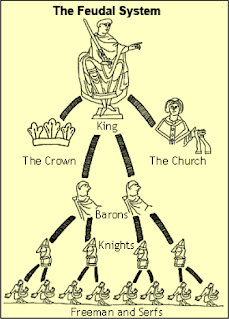 Politics and religion fit together hand in glove for Calvin, and this was one of his significant innovations.

Something Americans are never taught in school is that prior to Calvin, there was a basic, rough separation between the Church and the secular state. No, the U.S. revived, but didn’t invent, the idea. The medieval idea, deriving from the 400s, was that God chose separate leaders for church and state. This is not to say that there wasn’t significant meddling between kings and clergy in each other’s business, but the pretense of separate domains was always maintained. This was an important part of the feudal system. The Church supported and legitimized the king, and the king defended the Church, but they were separate pillars that upheld the social structure.

Calvin saw the role of government as that of enforcing citizens to subscribe to the religious confession. This wasn’t a new idea among the fervently religious, but Calvin had no interest in respecting a separate domain for secular rulers, even if they were pledged to defend the faith. He gave lip service to separation between church and state, but his doctrine and actions clearly indicated that in his version of religion, the religious ministers should rule society as the government. During Calvin’s time in Geneva, he continually battled with other elected leaders of the Geneva town council over control of the city’s ordinances and judiciary. Politically, Calvinism is the ideology that a particular interpretation of the Christian religion should pervade all aspects of government and society.

What Was Calvin’s Religious Doctrine?

Calvin’s religion was Protestant in that it was a break from the Catholic Church, but was independent from other Protestant movements. Calvin picked up on a recurring thread in some Christian sects: the cosmic view of Manichaeism. Calvin’s cosmology was an extreme dualism of Good versus Evil–God versus Satan–with humans stuck in the middle of this cosmic war. God wants to save humanity but Satan wants to drag humans into sin and devour them. This world belonged to Satan, at least until the “end time.” The world itself and the things in it were evil, including worldly pleasures. Calvin used his political power to ban such activities as music and dancing as sinful.

Calvin believed that humans were fundamentally depraved and incapable of being good. Only God is good and only by God’s direct action could a human think or act with moral goodness. Without God’s intervention, humans are left in the clutches of Satan, who would use humans for evil purposes. The world is infected with sin, because this is Satan’s world, and the devil “howls outside the door.”

Calvin believed that humans lacked free will. Humans are servants either of God or Satan. Humans couldn’t even choose who to serve. God preordained some people to receive salvation (The “Elect”), leaving the rest to their depraved sinful nature who would be damned to hell. Like others who preach determinism, Calvin was not consistent in it. He frequently fell back to acknowledging individual free will, for himself, but especially in teaching that others need to willingly change their behaviors to conform to Calvin’s teaching. This included exhortations to refuse sinful behaviors and refuse to associate with sinful people.

The way out of the paradox for most Calvinists has been to assert that we don’t know who are Elect and who are damned. We can’t know the mind or choices of God. However, Calvin also taught that God has filled the Elect with divine grace which compels them irresistibly toward good fruits. Despite condemning worldly pleasures, Calvin taught that God gave worldly wealth and prosperity to the Elect, and denied it to others. This translated to the beliefs that wealth is a sign of virtue and that poverty is conjoined with moral depravity.

The Worldly Consequences of Calvinism

Ethics is your response to how you believe the world is. The worldview of Calvinism is that we are at war with Satanic forces. Calvinist ethics responds to that belief with the demand to be ever on guard against the wolf of evil that would devour us if we slip up even once and lose salvation. To be a good person is to be a slave to Calvinist Law. Any other path is to fall into slavery to Satan and become an evil person.

Humans considered to be evil are condemned by Calvinism as being without hope of redemption. This logically follows from the beliefs in predestination (God chooses who will be good or evil) and that God condemns sinners in absolute terms. Hell is a deserved eternal punishment and sentence is carried out without appeal, without hope of repentance or redemption. Calvinist ethics therefore demands that “good people,” “The Elect,” likewise condemn others and shun them as enemies of the good. Calvin’s strict dualism creates an unbridgeable gulf between those who are good and those who are evil. Evil people are fundamentally depraved and irredeemable and thus wholly Other. This dynamic has been dramatized in such fictional works as The Scarlet Letter and The Crucible. In real life, this dynamic is repeatedly played out in conservative politics, which sees the world in dualistic terms of “the good” manifesting dominion over “the evil.”

The Polity of the Elect

Calvin, naturally, believed he was one of God’s Elect and thus believed he was fit to rule as sovereign. His dictatorship was a utopia (if you could call it that) of complete obedience to the rule of God’s Law as interpreted by Calvin and administered by his church. He became known as “The Tyrant of Geneva” because of his extreme tactics in maintaining control over every aspect of his subjects’ lives, including executions.

Calvin’s new religion was popular in some circles though these groups lacked the political power to establish Calvinist-style dictatorships. They were often brutally oppressed by rulers throughout Europe who saw these movements as a threat. Many Calvinists came to the new world, hoping to establish their version of government there. The “Puritans” who came on the Mayflower to found New England were strict Calvinists who were seeking religious freedom of a sort. Though most of America’s “Founding Fathers” a century later were Deists and liberal in their Christianity, the Puritan influence on America has been profound. (See: The Puritan Origins of the American Self and The Puritan Origins of American Patriotism.)

The United States is a nation that has always had a fierce strain of Calvinism that is still manifest today. The Calvinist legacy has created what Harold Bloom has called “the primary God of the United States” (Jesus and Yahweh, p. 111). The Calvinist God protects the United States, the ordained world leader, from its enemies foreign and domestic. United States citizens are God’s Elect–at least those Americans who are good Fundamentalists. American Calvinism, being inconsistent in its doctrine of divine determinism, demands that others willingly change their behaviors to conform to Calvin’s teaching about who is good and who is evil. That teaching includes the idea that wealth is a sign of virtue and that poverty is conjoined with moral depravity.

Secular and Religious Calvinism in the U.S.

The worldview of U.S. Conservatism has its roots in Calvinism. Its dualism is a mirror of Calvinism’s dualism. We decidedly see this in religious Fundamentalism, where Calvinist doctrines have been the core dogma of the “religious right” for centuries. Part of the legacy of Calvinism is an ideology in which those of different ethnicity or creed are placed under the classification of evil. Those considered different are vilified and marginalized. Foreigners are the enemy, especially if they are non-white. Non-whites, even though they are Americans, are considered lesser members of society. That black people are cursed by God has been a long-held conception, especially for the Mormons.

The Calvinist dualistic worldview has spilled over into secular America. A corollary to this conception of evil is that attempts to help the disadvantaged in society is actually not just a waste of time but morally wrong. In essence, it is aiding evil. The poor are poor because they deserve to be poor because of their sinful nature. Calvinism also lies at the root of political ideology of Libertarianism, the pretentious (and false) name for the “I got mine, you get yours” brand of economic politics. Like Calvinism, Libertarianism believes that wealth and poverty reflect ethical character not social realities. If someone’s facing serious problems in their life, they must have done something to deserve it, which also reinforces the fallacious worldview that we are not allowed to blame the conservative system.

The ideology and actions of U.S. conservatives express Calvinist dualisms. The “Puritans” have always had an influence on American politics and culture that exceeds their numbers. The secular U.S. now has a civil religion built on the foundation of Calvinism. The conservative notion of American exceptionalism, from the Monroe Doctrine and Manifest Destiny to the current “leader of the free world,” is inspired by Calvinism. The Right’s disdain for those who are different is an ethical view responding to the belief that difference itself is a sign of moral failing. The Right’s hostility for government helping the disadvantaged manifests the Calvinist belief that we should not help the undeserving. Reactionism on right-wing radio, television, and the Internet is the 21st century manifestation of the 16th century ideology of Calvinism.

Calvinism in the United States