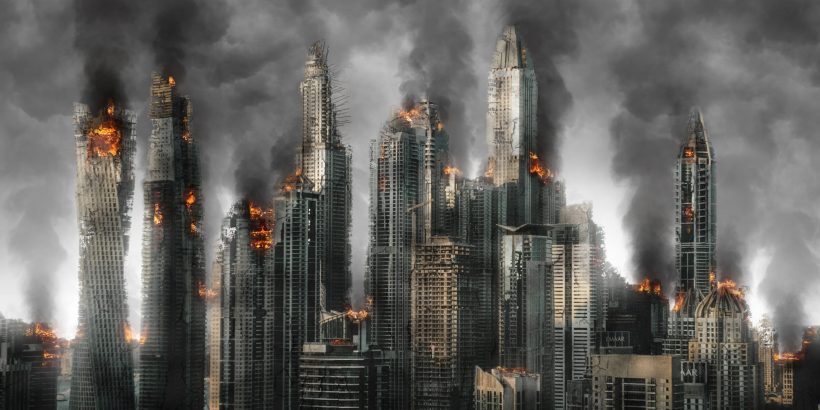 Putin’s invasion of Ukraine brings up a vexing philosophical question: when is war morally defensible? A small but ancient part of political philosophy is known as “just war theory.” There are two aspects to just war theory. One explores the question of when it is just for a nation or people to take up arms against another nation or people. The other discusses conduct of combatants—the rules of war.

It is an odd idea that there can be thoughts of proper conduct within war when one of the purposes of war is to kill other people. Yet, there is a long history going back to ancient times of mutually understood codes of conduct within war. Such codes include attacking only other soldiers, not civilians, and accepting soldiers’ surrender and treating them humanely when captured. Obviously, history is replete with examples of when such codes were not followed. Still, the need for such codes have manifested in such international agreements as the Geneva Convention.

Of course, the question of just conduct within a war only becomes an issue after someone starts a war. The primary question in the philosophy of just war theory is what conditions must be present to justify starting a war. That assumes that there is ever a justification for war, an assumption some people would dispute. We can immediately distinguish between starting a war by attacking another nation or people and defending from an attack. A right to self-defense is almost universally accepted, and so is that a government has an obligation to defend its citizens from attacks. I don’t think anyone argues that a country like Ukraine has no right to defend itself from a foreign invasion. A nation’s right to defend itself is included in Article 51 of the United Nations charter.

How can there be a justification to start a war? For centuries, the argument that offensive war can be justified has been founded on several basic principles. The first is that the cause is just. There must a good reason to go to war. The second is that the aims of the war are for the greater good, the war has noble aims. Third, war is used only as a last resort when no other course of action has a good outcome. Some philosophers have added more conditions and considerations but these three core principles are almost always present in any just war theory. When these conditions can be met, war can be justified. At least that’s the theory.


Another question is who has the power to start a war? Even if the conditions for a just war can be met, philosophers have held that the authority to declare war resides only in the legitimate leaders of a nation. The rationale being that only proper governmental officials can make rational, informed decisions on whether the conditions are met. Vigilantes do not have the right to start a war.

It has long been widely held that political leaders have the legal right to start wars. Placing the power to declare war in the hands of political leaders is problematic. Legal right is not equivalent to a moral right. Putin had the legal right within Russian law to authorize the attack on Ukraine, but it strains rationality to find a moral authorization for it. There is also the legal layer of international law, but as I briefly mentioned regarding the United Nations, international law permits only defensive war, not instigating an offensive war against another nation or people.

Self-defense or protecting the innocent qualify as just causes with just intentions. If an attack is ongoing, then other options such as diplomacy are no longer options. The philosopher Thomas Hobbes said that the first natural law for humanity was to seek the peace but failing that to defend oneself by any means necessary. Hobbes here is expressing a widely-held human sentiment. Fundamentally, we want to be left in peace, but we will defend ourselves when our peace is disturbed. Hobbes’s political philosophy leaves a lot to be desired because he advocated totalitarian government, but he did say that the fundamental duty of government is to protect its population from threats to their peace, in particular from foreign invasion.

Some argue that even if a nation has not been attacked, their right to self-defense entitles them to attack in a pre-emptive strike. This was the United States’s justification for invading Iraq in 2003. “Iraq could use weapons of mass destruction,” went the argument, “therefore we need to invade to prevent that from happening.” To establish that rationale, the U.S. government tried to establish the existence of weapons of mass destruction in Iraq. If, as now seems to be the case, there were no weapons of mass destruction in Iraq, then the 2003 invasion of Iraq was not justified. Establishing legal authority to start a war did not translate to the moral authority to do so.

It is revealing that political leaders seek to morally justify their desire to start wars. It shows the importance of the concept of a just war, even for despots. Adolf Hitler spent considerable time and energy attempting to justify starting a war. He eventually resorted to manufacturing incidents of Polish attacks on the German border, most notably a fake attack on the Gleiwitz radio station, and used these as justification for the invasion of Poland. Though he convinced no one with the subterfuge, it is notable that even Hitler felt the need to create a pretext, however small, to justify starting a war.

Putin acted similarly before his invasion of Ukraine. Historians will later debate whether particular incidents in Donetsk and Luhansk were “false flag” operations, but in general, Putin attempted to establish Ukrainian aggression as the pretext for war, including accusations of genocide. Though Putin provided no evidence for his assertions, he still felt the need to justify his act of war.


It is not a political statement to condemn an unjustified invasion of another nation. That is a moral statement that transcends political considerations. It is difficult to see how desiring war is morally defensible, though it is certainly morally laudable to defend the innocent militarily. If we say, as we seem to have to say, that fighting war to defend the innocent is a moral good, then we need to guard against a slippery slope. Many wars throughout history have been justified with the rationale that a nation needs to act militarily on behalf of innocents in another country. One common rationale is irrendentism, the push to reunite with one’s own nation territories historically or ethnically related but currently within the boundaries of another political unit. Putin says he wants to protect and liberate Russian-speaking peoples in other countries, Hitler wanted to unite ethnic Germans under one large nation, and so on throughout history. Are these truly moral arguments or are they political pretexts to justify military aggression? We must admit that acting to protect a persecuted minority in another nation may be justifiable, but this is a slippery slope leading to easy abuses, as has been proven.

It would be wonderful to be able to ban all war as immoral and relegate war to the dustbin of history as an archaic relic. We would love to believe that humanity has evolved past the need for war. But the need remains for self-defense against madmen and opportunists. A crucial philosophical and political question for our time is how we can eliminate war, while being willing to protect the innocent from war, while also guarding against those who wish to exploit the fear of war to manipulate citizens and extort power and wealth from them. That is a difficult balancing act, and political leaders need to be held to account by the people to act in the interests of people, not warmongers and weapons manufacturers. People seek the peace, only the immoral lust for war.