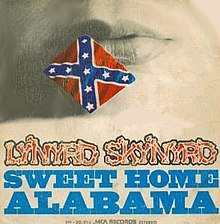 My wife and I were at a recent street festival in Prague, Czech Republic. A DJ was playing standard mainstream music for the masses when suddenly the distinctive opening riff of Lynard Skynard peeled out from the loudspeakers. We groaned. “They have no clue what this song means,” my wife said. “Sadly, no,” I replied,” though it would be worse if they did know and they played it because of that.”

The song stopped about a minute in and someone made an announcement that was quickly followed by a children’s choir beginning their set. I knew from experience what the DJ had done. He had timed his set to end when the choir was supposed to start, but they weren’t quite ready so he threw on something with a familiar catchy opening to fill the time for the crowd. “Sweet Home Alabama” filled the bill.

The DJ probably had no clue about the song. Few in Europe do. yet, I hear the song on occasion—too many occasions—in street fairs, pubs, and restaurants across Europe. Europeans know that America has long had its unique brand of racism. They don’t much understand it, which is not their fault. They really don’t understand Lynard Skynard’s song defending racial segregation.

To be fair, many Americans don’t understand “Sweet Home Alabama.” They are fooled by its childishly simple melody and chord progressions into thinking it is no more than a hymn praising home. Well it is. Only what is being wistfully praised about “sweet Alabama” is its racially segregated past.

“In Birmingham, they love the governor (oo oo oo)
Now we all did what we could do
…
Sweet home Alabama
Where the skies are so blue and the governor’s true.”

That governor being George Wallace. What the governor was true to was the vision of a white supremacist segregated South. Wallace did all that he could do to keep African-Americans as second-class citizens within racial segregation.

It is interesting the Lynard Skynard chose to say the love for the governor was in Birmingham not in the state capital Montgomery. Birmingham, Alabama was the site of vicious white violence against African-Americans. In that city, the Ku Klux Klan bombed the 16th Street Baptist Church, killing four black girls. In that city, white supremacist police chief Bull Connor unleashed attack dogs against peaceful black marchers. In contrast, Montgomery was the site of the successful Montgomery bus boycott, sparked by Claudette Colvin and Rosa Parks, in which Martin Luther King, Jr. emerged as a civil rights leader. Lynard Skynard chose to extol the site of white supremacy’s “victories” rather than its defeats. They all did what they could do to defend segregation, as Wallace did.

Any doubt that “Sweet Home Alabama” is a right-wing political anthem is put to rest by this bizarre lyric.

“Now Watergate does not bother me”

Certainly the only pop song to mention Watergate, Lynard Skynard’s endorsement of President Nixon at the height of the Watergate scandal and several months before Nixon was forced to resign is a singular event in pop music history. Nixon’s “Southern Strategy” of stirring up white resentment against African-Americans for the end of segregation was still fresh in everyone’s memory and undoubtedly a part of Lynard Skynard’s desire to go out of the way to defend him. Of course a corrupt and lying white supremacist president doesn’t bother other white supremacists.

Warren Zevon sang that those who listen to “Sweet Home Alabama” only do so because their own lives are miserable (“Play It All Night Long”). Or maybe those people are just ignorant. If you are a DJ, you really should understand what you are playing. You are responsible for what you put out there.