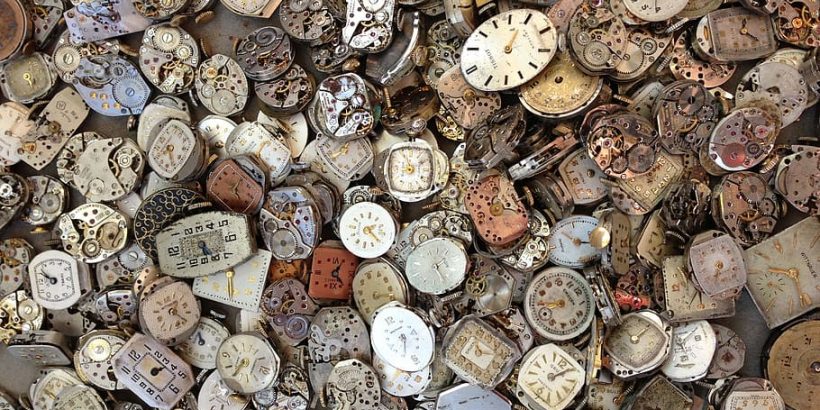 …but I’m really talking about the human perceptions of time.

Yesterday, my spouse reminded me that this year is one of those decade-defined anniversaries of my graduation from high school. It honestly had never crossed my mind. I was too busy living in the present.

Humans do grant special significance to anniversaries ending with the zero digit. No doubt this is a natural extension of the number of digits at the ends of our pairs of limbs. Fair enough.

But why commemorate anniversaries at all? True, those who forget the past are condemned to repeat it. That is why we commemorate tragedies and the beginnings and endings of wars. But what the heck are high school reunions about? A strange soup of nostalgia.

(N.B. — Anything that comes off as snarkiness is unintentional.)

Yes, I hated high school. I was funneled through one of those sprawling suburban high schools. Not one of the utopian high schools of John Hughes films (“oh, how can I get the other perfect rich kids to like me?”); it was a dystopian semi-prison of “oh, crap, is this all there is to life?”

The many reasons I despised Dystopian High were personified in Myron (he preferred first names). He was the high school principle, and to his great credit or great blame, he crystalized into his job everything facile and wrong with suburban America.

“These are the three best years of your life.”

That was how Myron began the mandatory school assembly the first day of each school year. (It was a three-year high school back then.) I shuddered every time I heard it and every time I’ve remembered it. I still have the exact same thought as I did on the first hearing.

If these are the best years of life, then everything afterwards is guaranteed to be worse.

Myron probably meant well, but what a horrible thought to plant into the minds of highly-impressionable youths. This is it, kids, enjoy it while it lasts, it’s all downhill from here.

Myron the high school principle cared about only three things: stay off drugs, cheer the football team, and support the marching band.

Academics? Don’t be silly, high school isn’t about academics. At least Myron’s wasn’t. My graduating class had 603 students. Only 12 were National Merit Scholars. Only two scored 30 or more on the ACT. (Full disclosure, I got the highest at 31.) To graduate, one needed only two math courses and two science courses. You were allowed to take up to six gym “courses” and sixstudy halls. The physics course (one semester only) used a 25-year old textbook. The school did not offer a calculus course. No philosophy, no advanced humanities, no civics, no history beyond U.S. history. There were no academic extracurricular activities: no science club, no debate team, no chess team, no college prep assistance, nothing. We few who wanted to go on to to higher education were all but ignored.

The school did offer a Homecoming dance, a Christmas ball, a Valentine’s Day party, a Sadie Hawkins dance, and of course, Prom. There were four cheerleading squads (football, hockey, and boys and girls basketball), pom pom squad, dance line, pep club, homecoming committee and probably other extremely non-academic stuff I have forgotten due to my intense efforts to avoid it all. The Beautiful People (the athletes and cheerleader/dance liners) could graduate receiving from the school only four STEM courses but 15 parties.

The facebook page for my graduating class proudly states: “we are the class who knows how to party!” I can’t blame them. All their high school offered them was a party. That’s what they remember.

Yes, let’s get back to time. Really, I apologize for venting about high school, but it relates to looking back at the past. As is no surprise by now, I look back at high school with negativity. Of course, many of the 602 other students who graduated that year may have fond memories. That’s cool.

Remembering… that’s about time. It is looking back in time, back at the past. A time that no longer exists, and given how inaccurate is human memory, things that may never have existed.

I looked up that facebook page for my graduating class, saw that this group “who knows how to party!” is planning a reunion for that decade-defined anniversary of their graduation. They reserved the patio and adjoining room at some “supper club” that was on a rural road decades ago but since has been swallowed up by suburban sprawl. For $40 a head they can drink light beer, listen to a DJ playing all the music that was on the radio during those high school years, and remember …

I’m not knocking it. Really, “whatever turns your crank,” as the kids said back then. Harmless fun, right?

I remember Myron’s words. “These are the three best years of your life.” I remember how much the kids at that high school took those words to heart. I can’t help but wonder how much they still do.

High school reunions are a strange soup of nostalgia. The problem with nostalgia is that is that it is, to be blunt, a lie. Recently I saw this posted online that really nailed it despite the spelling errors.

Exactly: a kid’s-eye view, unencumbered with the stress of adult life. Maybe that’s what Myron was getting at. Adult life couldn’t be any better than this last gasp of childhood. How sad, how pathetic, that that high school prepared students for little more than a sugar-coated, shallow view of a tiny slice of a human life.

Sadly, I suspect Myron was not an aberration, and I am talking about time, not high school. “When times were better” is a common refrain from some politicians and their followers who want to make things “like they were” again. But they never were that way. Not really.

Some would say I am being cynical. I say living in the past is cynicism; it is saying, like Myron did, that the future can never be better. It is a surrender. It is apathy. I was frustrated with that attitude then, and I still am.

In high school, I never would have imagined I would become a teacher. Granted, I teach at a university, not a high school, but I see my mission as a teacher to be preparing students for their future, not a past. I would do them a huge injustice to want them to believe university is the best that their lives will ever be. I want them to find themselves and to find their dreams. I want them to be able to decades from now say that they are making their mark on the world by making it a better place. I earnestly wish for them to be able to do more than look back at “when times were better.”