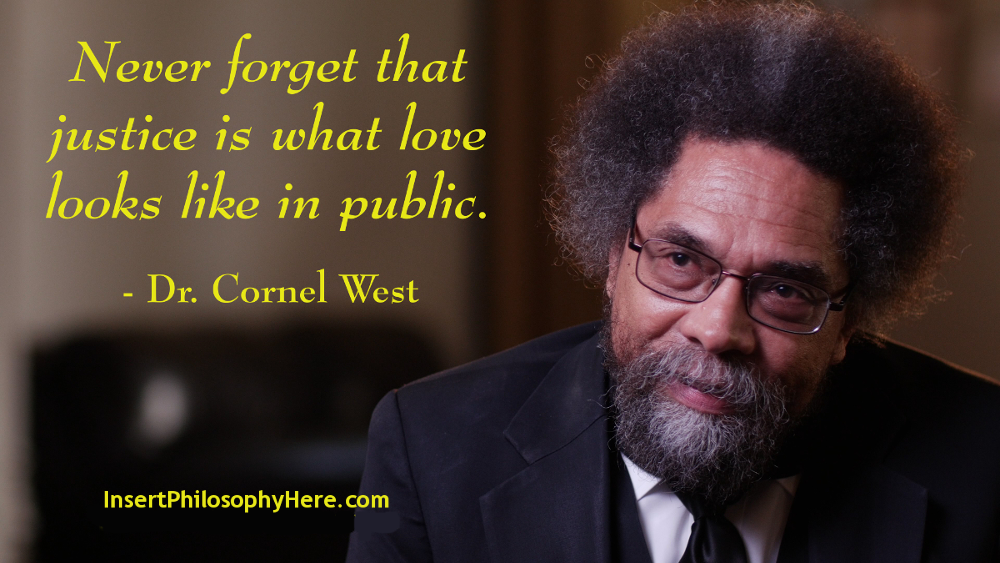 Never forget that justice is what love looks like in public.

African-Americans have been fighting for justice for a long, long time. Dr. West is one of the champions.

I have long admired Dr. West, using some of his writings in the classes I teach. He offers excellent insights on the experiences of Americans of color but also on what it means to be an American in general. Obviously, Dr. West is largely critical of America, and with good reason. He is not afraid to acknowledge the systemic racism in America. He writes eloquently and harshly about America’s history of race-based injustice, but he is not a cynic or a nihilist.

I highly recommend Dr. West’s book Race Matters. In this classic book, he takes on structural racism in America and the pervasive dimensions of the bigotry that is directed not just at black Americans but at all subaltern groups. The book will anger everyone who thinks and cares about people. As well it should; the truth about discrimination and oppression in American society should anger everyone.

Dr. West details the problems of race, but Dr. West keeps the faith and never loses an optimism that we can overcome our past and our predilection for misunderstanding and hostility. Cornel West on race is the redemptive Cornel West on justice and justice is what love looks like. He does not pretend that hope is easy, as he discusses in Hope On a Tightrope.

Cornel West on David Letterman, one of the few times the corporate media took notice of Dr.West

A 2016 interview: Cornel West: Justice and Accountability are Necessary to End Tension over Killings by Police

And finally, this article inspired by Dr. West’s theme of love as justice.