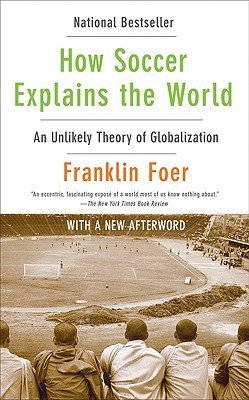 “It’s hard to explain to American sports fans — even die-hard American fans — what soccer means to people around the world. A soccer fan’s affiliation and affinity with a team affects everything they do. And while the 90 minutes that a team spends on the field during a match is important, the relationship fans have with the sport is so much more than what happens on the pitch. It’s really more of a lifestyle, and a philosophy. For millions and millions of fans, it permeates and informs every aspect of life — and I’m biased, but I think it permeates life in a good way!”
– Alex Lalas, American Footballer

Football does indeed permeate life in some good ways. They call it “The Beautiful Game” for a reason. Football matches can be works of art and can unite communities and nations. Football also permeates life in some negative ways. It can be a focal point for bigotries and lead to violence. To understand a group of people, understand their relationship to football.

A wonderful book on that subject is How Soccer Explains the World. Author Franklin Foer helps explain a number of cultures through their own version of football philosophy. Football is both a sport and a way of life at a level Americans do not experience. Americans have loyalty to their NFL, MLB, and NBA teams, but the rest of the world lives through their football teams. This is true for both their local teams and their national teams. To understand a local culture, look at how they act as football fans. Some teams are known for fan thuggery, others for willingness to regularly travel hundreds of kilometers to attend away matches. Other teams are known for fan loyalty no matter how poorly the team performs. Other teams, no matter how much success they achieve, have fans notorious for complaining.

Why don’t Americans appreciate football? One cynical answer is that it is because of the American cultural obsession with the brutish and the brusque and its lack of appreciation for intricacy.  The game of football itself is played in a way that separates it from American sports. Football is a constant flow of action. It is timed, but the clock does not stop. Players have great leeway to enact strategies. The playing field is much larger than in America sports and the players use all of the field in elaborate and intricate passing plays. There are fewer fouls and penalties and little physical contact. The object is not to overpower or dominate the opponents but to out finesse them. America’s most popular sport is the NFL–a form of rugby in gladiator gear that offers clearly delineated short bursts of brute force.

The Beautiful Game is a cornucopia of skill and strategy for people who are willing to really absorb what they are experiencing and who appreciate process, sophistication, and broad strategy. Those elements appear in American sports, especially baseball, but not at the level they  football. To each their own, but some people are really missing out on football. One has to ask themselves why they t appreciate other sports but not football. If they answer something like “football is low-scoring and boring,” perhaps the issue is them, not the sport.