“It is easier to start a war than to end it.” – Gabriel García Márquez
.
Born in Columbia in 1927, Gabriel José de la Concordia García Márquez grew up aware of the tradition of war in his home country and continent. Conquered by the Spanish and Portuguese in the 1500s, then occupied and exploited by them into the 1800s, then by the United States from 1800s to the present, Latin America was a crucible for both military and social war. Márquez is best known for his novels One Hundred Years of Solitude (1967) and Love in the Time of Cholera (1985). In 1982, he was awarded the Nobel Prize in Literature. Márquez also wrote non-fiction articles and books detailing abuses of power in the political struggles within Columbia.
–
Márquez’s works explored the struggles of human beings to deal with difficult circumstances. In particular, One Hundred Years of Solitude is an allegory for the difficult history of Latin America. Tracing the history of a Latin American town and its dominant family, the novel shows how greed and authoritarian violence defines life, but that hope and love persist. In the real Latin America, colonial powers started wars in the 1500s and no one since has been able to stop them.
– 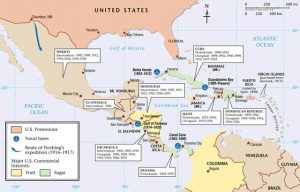 The Latin American people, from 1811 to 1839, tried to end the wars and exploitation in their wars of independence from European colonizers. Left alone, they may have succeeded. They were not. The main imperialist colonial power in Latin America since the 1840s has been the United States. The number of U.S. military interventions in sovereign Latin American countries is truly staggering. Dr. Marc Becker produced a detailed list here though he leaves out multiple U.S. invasions prior to 1890. Here is a great infographic on U.S. involvements since 1946.
–
Why the constant interference in Latin America by foreign powers? The Spanish came for gold and silver. The Portuguese, French, and British came for sugar and coffee. The U.S. for sugar, fruit, and minerals.  The purpose of U.S. interventions in Latin American affairs have predominantly been to protect the interests of U.S. corporations.
– 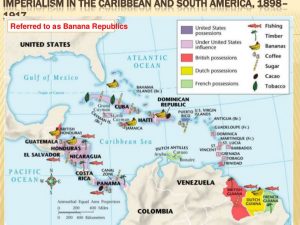 Dr. Gayle Olson-Raymer wrote this great page on The American Quest for Empire in Latin America. Latin Americans like Gabriel García Márquez grew up in an environment where economic and political domination (social war) was the norm.

“Bolivians die with rotted lungs so that the world may consume cheap tin.” ― Eduardo Galeano, Open Veins of Latin America: Five Centuries of the Pillage of a Continent

–
Gabriel García Márquez wrote about the grim realities of life in Latin America, but he also wrote about hope. He did not write about starting wars but trying to end them. His writing has been categorized as “magical realism,” meaning a mixture of the real and the fantastic.
–
Jorge Ramos replied to criticism directed at Gabriel García Márquez’s writing style with this:
–
“Yes, Latinos dream more. When you live in poverty, when your president is imposed upon you, when they kill someone and no one gets indicted, and when only a few get rich, of course you dream more. It’s no coincidence that magic realism happens in Latin America, because for us dreams and aspirations are part of life.” ― Jorge Ramos
–
Wishing for a better future is human nature. Fighting for a better future is a good cause. It is difficult to end wars, but to survive, we must.
–
“The Latin American cause is about all a social cause: the rebirth of Latin America must start with the overthrow of its masters, country by country. We are entering times of rebellion and change. There are those who believe that destiny rests on the knees of the gods; but the truth is that it confronts the conscience of man with a burning challenge.”
― Eduardo Galeano, Open Veins of Latin America: Five Centuries of the Pillage of a Continent
–