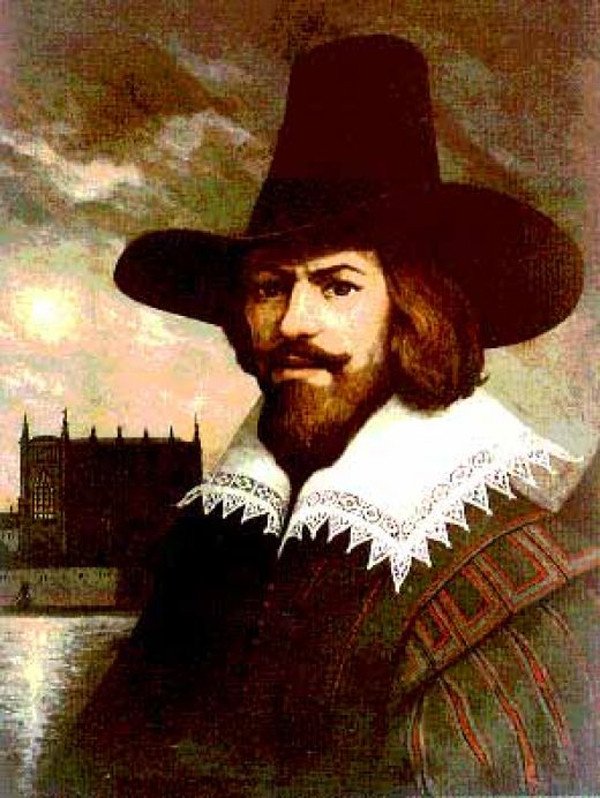 This is the face of a terrorist.

I chuckle when I see clowns with their comic book masks because they don’t understand who Guy Fawkes was or why he did what he did. Anyone knowing the facts about the 1605 terrorist group Guy Fawkes was a part of will find it disgusting that anyone would idolize him or adopt him as a symbol of protest. Let’s look into those facts.

The Political Background of 1605

To understand Guy Fawkes and the reaction to him, you need to understand the political situation at that time. In late 16th and all of 17th century England, the biggest political issue was the question of Catholicism. This was far more than an issue of personal religious freedom, it was a serious geopolitical issue for two reasons. The first reason was that the Catholic Church in that era was far more politically-oriented than it is today and was involved in almost all important international conflicts. The Church was a major power broker, involved in choosing rulers, negotiating treaties, and even raising armies for military actions. Within the Church, selections of cardinals and popes were political decisions struggled over among the rich and powerful. England had broken from Papal authority in 1534 for purely political reasons and animosity with the Papacy and nations allied with it had threatened England ever since. England had had running battles with rivals Spain, France, and Portugal for decades not only in Europe but in North America, the Caribbean, India, and the East Indies as the colonial powers fought each other for supremacy all over the globe. Catholic Spain had been the main threat to England and England had escaped Spanish invasion attempts in 1588, 1596, and 1597. In 1593, the French Catholic-Protestant civil wars ended with Henry IV declaring himself, and thus France, Catholic. When Pope Clement VIII negotiated a peace treaty between France and Spain in 1598, fears in England of the “foreign Catholic threat” increased even further.

The second reason Catholicism was seen as a threat in England was the prevailing assumption that social diversity was dangerous. Orthodoxy of language, ethnicity, social practices, and ideas were felt to be necessary for social stability. Difference of any kind was felt to be a threat to society. This feeling was felt particularly strongly in religion. The word “heresy” derives from the Greek haíresis meaning the “act of taking, choice, course of action or thought, system of principles, sect, faction.” It came to be associated with religious sects, but its root is in the idea of choosing to act or think differently. In the early 17th century, as for centuries before and after, it was felt that a society was best when it was perfectly orthodox: one ruler ruling over one homogeneous culture. Again, this extended to all aspects of human society, but especially around 1600 the religious loyalty confession: Catholic or Protestant.

This basic assumption was practiced by all states: if the ruler was Catholic, everyone had to be Catholic. If the ruler was Protestant, everyone had to be Protestant. Diversity was dangerous. England’s king was a Protestant therefore to not be Protestant was to be an enemy of the state. When James VI of Scotland ascended to the English throne in 1603, his policy toward Catholicism was a major issue. James initially showed some signs of tolerance to English and Scottish Catholics which alarmed many. After a plot by Catholic priests in 1603 to kidnap him was thwarted, he ordered all Catholic clergy out of England, driving English Catholics even further underground. Still, the fear and bigotry against Catholics was so strong that accusations were widely made that James and his wife Anne were not anti-Catholic enough and maybe even secretly Catholic. It is akin to today’s bigotry against immigrants or Muslims and right-wing opposition to cultural diversity. Still today, fear of diversity drives so much social conflict.

Despite James’s relative tolerance toward Catholics compared to his predecessor Queen Elizabeth I, he and the United Kingdom were officially Protestant. This reality angered some conservative English Catholics who wanted to reverse the direction of political oppression. Also believers in cultural orthodoxy, they wanted to establish a monolithic Catholic state, for the general good. One group, led by Robert Catesby, plotted to violently overthrow the English government and install a new monarch and parliament that would be loyal to the Pope. Catesby had participated in rebellion against the previous monarch, Queen Elizabeth I, in 1601. When James turned from tolerance toward Catholics to repression of them, Catesby initiated what came to be known as the Gunpowder Plot, the details of which you can read here.

Catesby and his co-conspirators had a simple goal: murder the entire English government and replace them with a Catholic theocracy. They planned to kidnap the King’s nine-year old daughter and install her as a Catholic queen. Pope Clement VIII had issued a decree to English Catholics not to rebel against King James because the Pope correctly feared any such rebellion would only increase anti-Catholic persecution in England. Catesby was informed of the Pope’s decree by a Catholic priest, but Catesby refused to follow it.

Guy Fawkes was a minor player in this conspiracy though a fanatical anti-Protestant. He is famous because he was the first plotter arrested. He was the fall guy caught with the explosives in place to attack the Parliament building in the early morning hours of November 5. That night, Londoners celebrated the failure of the plot to overthrow their government with bonfires. An Act of Parliament later officially declared a national holiday. In subsequent years, bonfires and burning an effigy of Guy Fawkes–and often an effigy of the Pope–came to symbolize the defeat of the “Catholic threat” and was a celebration of England’s superiority. The Guy Fawkes mask became, by the mid 17th century, a bogeyman symbol for enemies of England and anti-Catholic bigotry. Pope Clement VIII had been right. England soon reached extremes of anti-Catholic violence. Laws banned Catholics from any participation in government, even voting. Only after anti-Catholic laws in England were finally rescinded in 1824 could English Catholics practice openly.

England celebrates the 5th of November as Guy Fawkes Day, better known as Bonfire Night. It is like the Fourth of July in the U.S. Mostly now people use it as an excuse to whoop it up and drink alcohol. Burning effigies is as archaic now as is xenophobia about the “Catholic threat.”

Today, a few people who read more comic books than history books ludicrously use the Guy Fawkes mask as a symbol. Some claim it symbolizes the fight for civil liberties against oppressive government. This is a shockingly ignorant delusion. It is the height of absurdity to use as a symbol for civil liberties a henchman in a terrorist gang who tried to bring about a theocratic dictatorship through mass murder. Anarchists also use the Guy Fawkes mask as a symbol of their hatred for government and rule of law. But Guy Fawkes was not against government. He was against Protestants. Perhaps to 17th century Catholics, Guy Fawkes was a freedom fighter, but to everyone else he should be seen as the terrorist and bigot that he was.

When Anonymous and others hide behind the Guy Fawkes comic book mask, they are telling us they are either one, just plain ignorant of history; two, a Royalist supporter of the English monarchy mocking its vanquished enemy; or three, a supporter of mass murder to bring about a Catholic theocracy. Perhaps they could explain which.