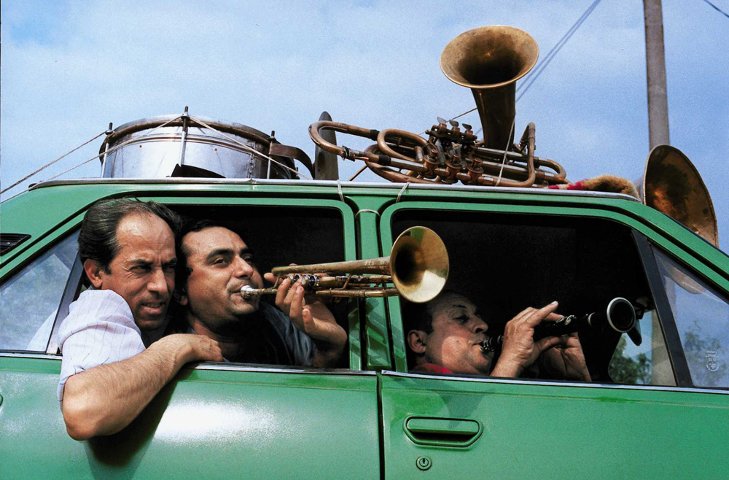 A rather underappreciated genre of world music is variously known as gypsy or sometimes less accurately Balkan music. Gypsy, because much of it musical forms derive from Romani, more commonly known as “gypsy,” culture. Balkan, because those forms have influenced much of the music from that region. Like all genres of world fusion music, gypsy/Balkan music comes in a range of forms from traditional folk to jazz to modern club music.

Traditional gypsy bands stretch back to at least the 16th century formed of three or more musicians playing homemade lutes and fiddles. Musicians were known as lăutari from the Romanian word for lute and together a band was called a taraf, which is why the most famous traditional gypsy band is called Taraf de Haïdouks—literally “band of outlaws.” Having 12-15 members at any one time, Taraf de Haïdouks is a wall of strings spiced with accordions and percussion.

Spanish flamenco music is not entirely Spanish; it developed as a particular version of gypsy music and dance by Romani who emigrated to Andalusia. One great example that acknowledges its Romani roots is the Gypsy Kings who play traditional flamenco and a fusion of flamenco and more mainstream pop. One of the Gypsy King founders formed an offshoot band called Niño Baliardo & Gypsy Dynasty. This is one of the many sub-genres of music I someday need to explore more thoroughly.

Strings–whether violins or guitars–are one side of the gypsy music tradition. The other side is brass. Perhaps the best known example of gypsy brass is Fanfare Ciocărlia who describe themselves as “a 24-legged brass beast whose eastern funk groove has torn up halls and festivals across the planet.” That eastern being more in the sense of eastern Europe than east Asia, though I suspect there is an ancient primordial link with Indian brass bands. They certainly look like haïdouks in their pr photos, but their concerts are pure dance party energy. Their cover of the 007 Theme is pure delight.

Substantially similar to gypsy music is the genre of Jewish music called “Klezmer.” Who influenced who is unknown, but throughout Eastern Europe both the Romani and the Jewish people were socially ostracized and perhaps musicians on both communities shared music with each other. Some of the best music in the world is created that way.

Of course, what I find most exciting are artists trabsforming traditional music into new forms. Traditional forms of gypsy music provide a foundation for a number of other genres: gypsy jazz, gypsy swing, gypsy punk, and so on.

Balkan Beat Box is a fusion of gypsy music, Balkan/Mediterranean, and trip hop, spiced with Arabic influence on a few tracks, and Raggae on a few more. Founded by Israeli expats Tamir Muskat and Ori Kaplan who met in Brooklyn and now including fellow Israeli Tomer Yosef, they are rooted in Israeli klezmer music but are a true world fusion band with a bit of a punk sensibility. They have released five albums, and one full-length remix album and one remix ep.

High energy gypsy ska punk band Gogol Bordello was founded by Ukrainian Eugene Hütz, who is not Romani, but he loved gypsy music and the idea of the wandering outcasts and blended it with German post-punk. The results are convincingly authentic and you can hear the outlaw quality of Taraf de Haïdouks. This video of theirs captures their insanity well. While this page from their Website, gives a glimpse into the soul of the band in a touching tribute to how they are all immigrants.

Similar to Gogol Bordello is the lesser known but excellent Antwerp Gypsyska Orkestra. More authentically gypsy, they move easily from hardcore ska to lounge torch songs. This compilation video gives you samples of their most recent release.