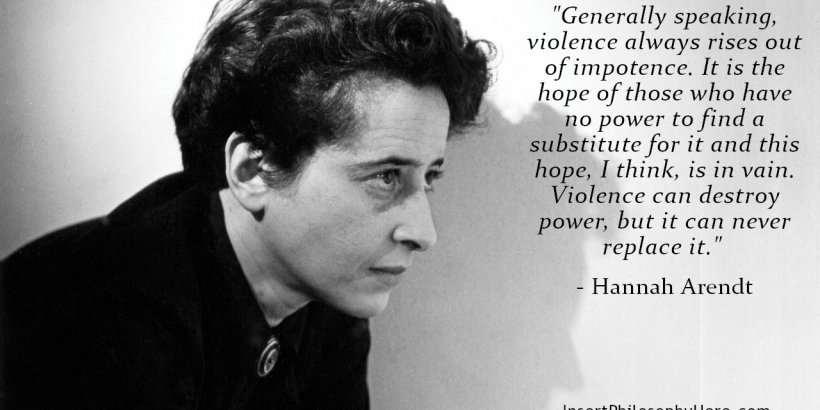 “Generally speaking, violence always rises out of impotence. It is the hope of those who have no power to find a substitute for it and this hope, I think, is in vain. Violence can destroy power, but it can never replace it.” – Hannah Arendt

It’s an old adage that violence never solves anything. Violence is not a solution to a problem; it is only a deferral that creates more problems. People who feel impotent, whether flying the flag of fascism or of anarchism or of whatever, use violence to generate a superficial sense of self-recognition: “I am powerful because I can commit this act of violence.” But any self-satisfaction coming from an act of violence is at best fleeting. The impotent person must return to commit another act of violence, and another, and another.

Arendt’s insight works on multiple levels. At the interpersonal level, individuals lash out violently at another when they feel the need to exert power over another. Even in a person already in a dominant position, the desire to be violent toward another comes from a place of weakness and self-insecurity: the need to subdue another to feel better about oneself. At the social level, acts of violence are a public attempt to show one is not impotent, to try to impress others or just to feel better about oneself.

Political acts of violence, from vandalism to assassination, are often rationalized as acts of defiance against power. Arendt is correct, though, that violence can never replace power. Power comes not from violence but from recognition that generates new authority. One needs to create not destroy. Few philosophers have understood the nature of power as well as Hannah Arendt did.

Hannah Arendt on Violence as Impotence.