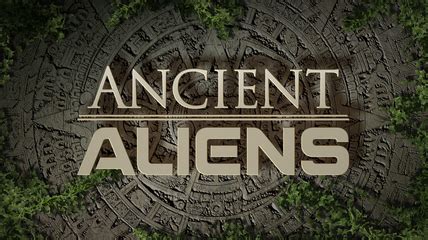 There is a TV show. Inside it are many tall tales. It demands we give up all the critical thinking we have ever been taught. Its absurdity is everywhere. Its nonsense is right before our eyes. They are not honest, they have never been honest.

Why am I being so harsh on what I have to admit is one of my favorite TV shows? Because the reason I enjoy Ancient Aliens is for the opposite reason they want me to enjoy it. See, Ancient Aliens is an extended telling of a conspiracy theory. It’s serious claim that archaeologists are suppressing proof of continually alien presence is interesting, but it’s the convoluted, logic-bending presentation of this so-called proof that provides the entertainment. Under the show’s absurdity, though, is something ugly.

The Unintended Comedy of a Conspiracy Theory

I enjoy archaeology and history because they teach us how people thought and lived. I’m also looking forward to when we discover extraterrestrial life. But I’m not so looking forward to it that I’m willing to invent fantasies about archaeology and history to pretend that extraterrestrials have visited us. That’s what Ancient Aliens does and it isn’t even very smart about it.

I’ve written about how conspiracy theories work. One type of conspiracy theory is taking a set of ordinary facts and adding a fantasy element to make them more exciting. Then the theorist claims that the stuffy experts are suppressing knowledge of the exciting fantasy, so you have to listen to the theorist to learn what is true.

Ancient Aliens is a glossy, lengthy version of this type of conspiracy theory. The central premise of the show is that experts in science and government are suppressing evidence of the alien presence in Earth’s ancient times. The show presents a group referred to as “ancient astronaut theorists” who are exposing the conspiracy theory. None of these ancient astronaut theorists are historians. None of them are archaeologists, anthropologists, or any other kind of scientist or academic. Nevertheless, all of them claim to know more about ancient history than all the scientists in the world.

The problem with the ancient astronaut theory, and the Ancient Aliens TV show, is that the alleged evidence for Ancient Aliens is underwhelming. The ancient astronaut fantasy has to be pieced together by deliberately forgetting historical facts and taking absurd leaps of logic. Absurdities of reasoning and calculated misdirection are abundant in the show, providing unintentional comedy. But there is something else going on. There are several patterns to the absurdity that are worth exploring because they illustrate how conspiracy theories and propaganda work.

We can identify three assumptions that permeate the show.

Assumption 1: All ancient stories were actually about aliens.

This is the primary assumption of the show. The claim is that the heroes and deities of ancient times were actually extraterrestrial visitors, whose technology was interpreted by the ancient humans as supernatural powers. From Horus to Rama to Huitzilopochtli to Amaterasu to Enki to every other divine or semi-divine figure in ancient stories, Ancient Aliens claims they were ancient astronauts. The show provides no proof of this; it simply assumes it. The ancient astronaut theorists want it to be true, so they declare it is true. Everything else on the show is based on that assumption that aliens came to Earth in ancient times and the ignorant natives mistook the aliens for gods.

Assumption 2: Ancient humans couldn’t do much on their own.

There are two layers of this assumption. The first exploits the fact that there are many ancient cultures have stories about divine beings who taught people knowledge and skills. For example, ancient cultures commonly attribute their knowledge of agriculture to the teaching of a deity. Ancient Aliens claims this is proof that extraterrestrials taught ancient peoples agriculture and other knowledge. No other possible explanation for the stories is considered. It has to be proof of aliens. The ancient astronaut theorists want it to be true, so they declare it is true.

The second layer is that the show points to megalithic structures and assumes that ancient humans couldn’t build them without outside help and technology. “How could they build this stone structure without modern technology?” the ancient astronaut theorists say leadingly. They answer their own question with their assumption that it had to be alien technology that built megalithic structures like Stonehenge, Gobekli Tepe, the moai on Easter Island, the pyramids in Egypt and Central America, and well, every other ancient big stone thing.

The underlying assumption of the show’s all-white group of ancient astronaut theorists is that all of those ancient brown people couldn’t possibly have figured out how to grow their own food, build their own cities, or erect megalithic structures. The condescension can be thick at times. Even when it is thin, the assumption that only modern white people or aliens can perform complicated feats permeates the Ancient Aliens show. No, I’m not the first to call out the show’s racism.

The show’s disrespect of indigenous peoples is behind their very frequently made leaps of logic of linking similarities among different civilizations’ megalithic structures. The show lurches from one structure to another on the other side of the world and concludes they were both built by alien technology. What the show conveniently leaves out is that the megalithic structures compared were built centuries or even millennia apart. The unspoken assumption is that no human civilization can develop agriculture, architecture, astronomy, or anything else on their own. Ancient Aliens had to visit each civilization at the same stage of cultural development to teach them how to be civilized.

Actual archaeologists and anthropologists who do actual research on ancient peoples continually discover how intelligent and innovative those people were. Ancient people were no less intelligent, curious, or industrious then we are today. We can do more technologically because we stand on the shoulders of past innovative people. Humans of all eras are capable of massive undertakings. No aliens needed.

Assumption 3: Ancient Aliens came to our planet to build things out of stone

In the previous and current seasons of Ancient Aliens, the show has increasingly floated the idea that the ancient astronauts had left us clues that they built these ancient megaliths and that they are returning. What did the leave for us? Items of advanced technology? Texts saying “hi, we’re extraterrestrials and we built this?” No, say the ancient astronaut theorists, the extraterrestrials built those megalithic structures. Ancient people couldn’t do much on their own, so the aliens built all those stones structures. Not of high-tech materials; stone.

Some of the more outlandish moments of Ancient Aliens are when it suggests that the ancient astronauts built the megalithic structures, like the Great Pyramids of Egypt or the Mayan temple of Chichen Itza, to serve as energy sources or interdimensional portals. The ancient astronaut theorists provide no evidence for this, but they like the idea. It’s more exciting of a fantasy than admitting that these structures are nothing but rocks. Several ancient astronaut theorists on the show have suggested, with a straight face, that ancient pyramids were built by aliens to refuel their spaceships.

What Ancient Aliens Actually Teaches Us

The point of this exercise is that Ancient Aliens is more than reality TV silliness. How politics and the media frequently work is mirrored in Ancient Aliens’s presentation of warped reasoning and false narratives. Rapid-fire narration over quick cuts between disparate scenes and people who act like they know what they are talking about can trick the audience into not noticing that the emperor has no clothes. Ancient astronaut theory has no clothes. The same is true for almost all conspiracy theories, including political ones. The Ancient Aliens TV show is a benign example of how conspiracy theory propaganda works. Taking lessons from how the show does it helps us identify and deconstruct more serious attempts at media manipulation.

Grand all-encompassing explanations that replace critical investigation are attempts to silence discussion. It’s wrong when institutions of power do it, and it’s wrong when conspiracy theorists do it. Yes, the experts are sometimes wrong, and knowledge is sometimes suppressed. The answer to omissions and suppression is not to make up fantasies and declare they are true simply because we want them to be true. Reality is not simple. It is complex. Our best responses to reality will be to critically engage with it in all its nuance and reply grounded in facts.

Legitimate information about Gobekli Tepe, the not that mysterious and definitely not alien site

Pseudoarchaeology and the Racism Behind Ancient Aliens

The Idiocy, Fabrications and Lies of Ancient Aliens