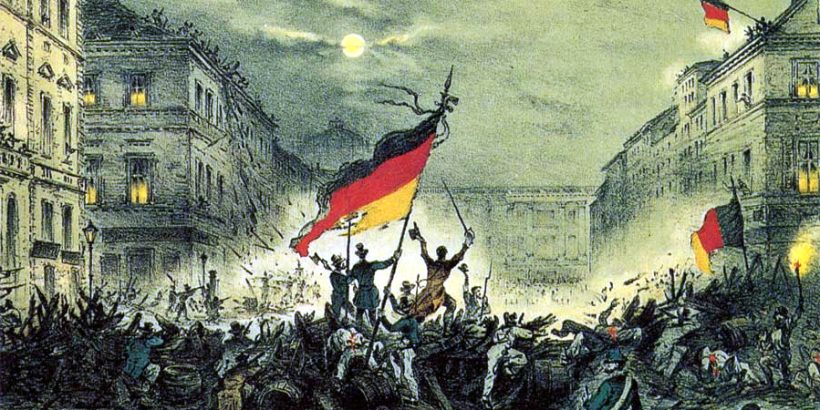 The Era of Revolutions?

As the manifesto’s text shows, the idea of communism already existed — Marx didn’t invent it. “Communism,” after all, comes from the Latin communis, which means “community,” so the idea of communism is the idea of communal society, variously interpreted, in contradistinction to a hierarchical society dominated by an elite class. Marx and Engels were discussing an emerging philosophical idea that, on the basis of contemporary events, they thought was about to become the major political philosophy in Europe. Marx’s goal was to understand both the movement he thought he saw coming and the broken sociopolitical system that the movement was opposing.

How did Marx and Engels come to the conclusion that revolution was inevitable? They based it not only on then current events but also on then current philosophy. The dominant philosopher in Europe in the 1840s was Hegel. A split had developed among Hegel’s followers into a conservative, or right-wing, interpretation of Hegel, and a radical, or left-wing, interpretation of Hegel. The split was predominantly based on whether the followers focused on the transcendent or the earthly interpretation of Hegel’s system. Here is the central example. Hegel had written that the real is the rational and the rational is the real, by which he meant that rationality is reality and vice versa. Right-wingers linked this concept to the hierarchical philosophical systems of the past. “The real is the rational” harkened back to Platonic ideas of the Good and Aristotelian ideas of final causes and essences. These Right Hegelians saw the Hegelian system as a fulfillment of that tradition of human thought. It is certainly a reasonable interpretation of Hegel, who saw human progress in terms of a march of reason through history (only European history and thought, of course).

Marx was part of a group of left-wing Young Hegelians who agreed with the Hegelian idea of historicism (the notion that there is a pattern to historical development) but who believed that human society is not rational, and if the “rational is the real,” then history is still evolving and not yet fully real. In brief, Marx saw the central contradiction of European society as, on the one hand, thinking it embodied the ideal of individual reason and liberty but, on the other hand, the lived reality of irrationality and the lack of freedom caused by industrialization and poverty. Marx believed that working people were waking up to these contradictions and were rebelling against the elite class that was oppressing them.

The March of Class Struggle

Armed with the Hegelian notion that history has a pattern and that history is developing along rational lines, Marx believed he saw that pattern.

The history of all hitherto existing societies is the history of class struggles. Freeman and slave, patrician and plebeian, lord and serf, guild-master and journeyman, in a word, oppressor and oppressed, stood in constant opposition to one another, carried on an uninterrupted, now hidden, now open fight, a fight that each time ended, either in a revolutionary re-constitution of society at large, or in the common ruin of the contending classes. (The Communist Manifesto)

In short, Marx and Engels claim the rich exploit the poor. Always have. Society has always been divided into a small wealthy elite and the poorer masses. In Marx’s time, that divide was between the capitalists who owned the means of industrial production and the workers who owned nothing. The capitalists profited from the labor of the workers — the rich exploited the poor.

Similar to Hegel, Marx thought that when we look back at history, we can discern a rational evolution through successive epochs. These epochs rise and fall as a result of “economic determinism,” a concept Marx invented, indicating that all human activity is determined by inescapable economic necessities. Marx said that he had turned Hegel on his head, replacing Hegel’s Geist with economic determinism as the force that drives the world. Individual humans are powerless to escape or affect these material macroeconomic forces that determine our lives. Human history is, therefore, economic history for Marx. Humans need to satisfy their material needs; therefore, they are dependent on the forces of production that satisfy those needs. As history evolves, the forces of production are altered by economic necessities and technological changes. What never changes are human material needs and the struggle over control of the forces of production. History is, therefore, the history of the class struggle.

In the economic epochs of history, there was first the epoch of slavery when the elite owned other people, then the epoch of feudalism when the elite tied the people to the land, and now the epoch of capitalism when the elite tie the people to the industries. In each epoch, the elite own and control the means of production, including farm fields, mines, and factories from small to big. In each epoch, the system of economic exploitation grew until its rational contradictions became unsustainable and circumstances forced an evolutionary change to a new system. So, slavery morphed into feudalism and feudalism morphed into capitalism. Next, capitalism will collapse from the weight of its rational contradictions, which make it unsustainable. This collapse of capitalism will usher in the next epoch — communism — when the class divide will finally end and society will be without rational contradictions. At least, that’s what Marx predicted.

Past Results Is Not Indicative Of Future Results

Marx was a brilliant diagnostician, but a much less successful prognosticator. Still, in the heady environment of 1848, we can hardly blame him and Engels for misreading the times. It certainly did look like history was coming to a major turning point. There was not a revolution that overthrew capitalism in 1848 and there still hasn’t been 173 years later.

Perhaps Marx’s biggest mistake was in adopting the Hegelian notion that humanity is just a set of gears within a cosmic machine and we are merely the objects of historical inevitability, History is not an unrolling of a spool laying down a preordained and unavoidable fate. People make history. We make our future.