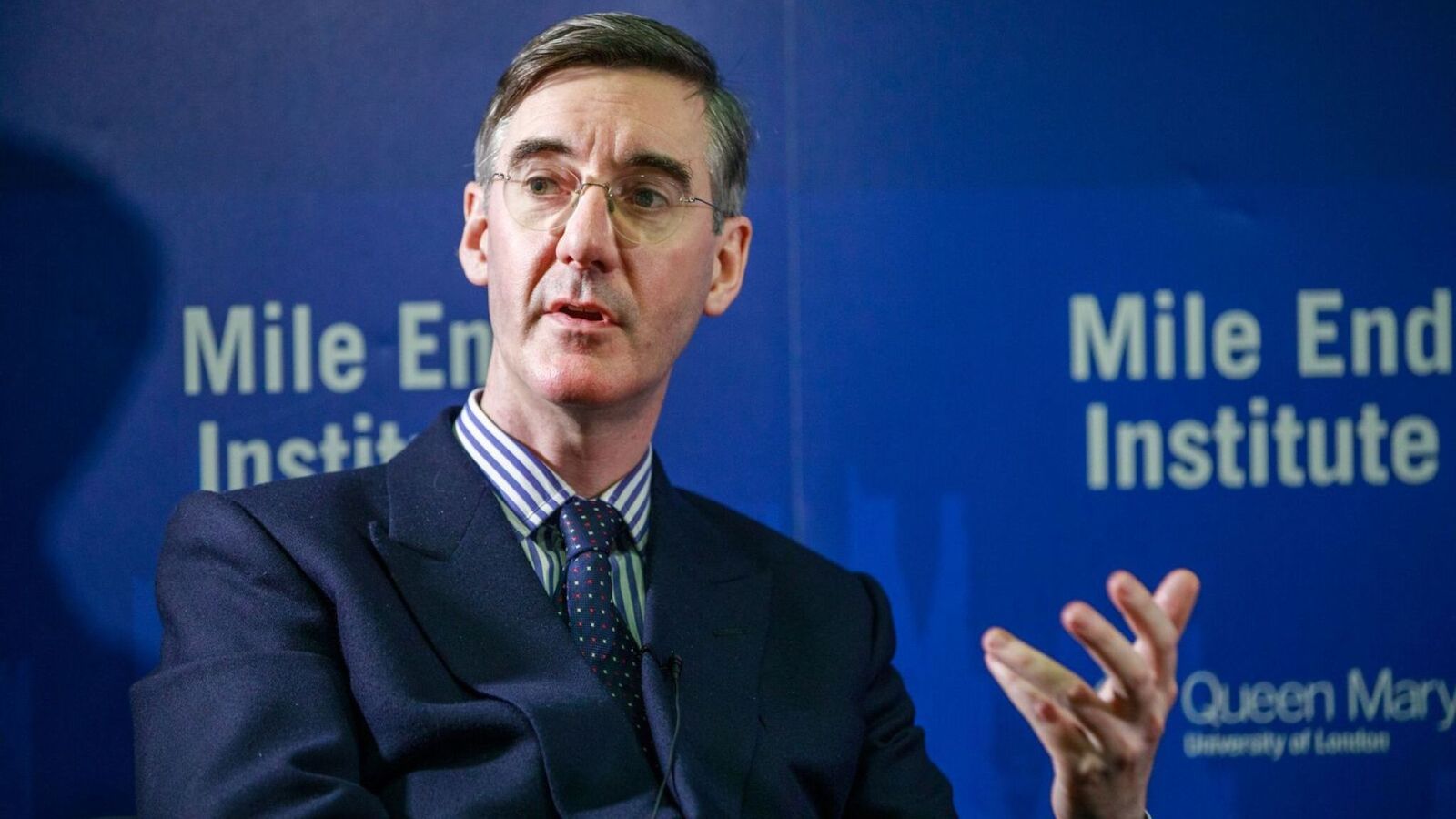 One thing that most Leavers and Remainers can agree on is that the Brexit process has been a mess. Who is to blame for that mess is as contentious an argument as Brexit itself. To understand why Brexit happened and also why the Brexit process has been in disarray, I suggest you think, not in terms of political party partisanship, but in terms of a simple question. Who is the power behind this muddle? Then you will find the Brexit conspiracy.

Yes, I recognize that I may start to sound like a conspiracy theorist in this article. But you are not paranoid if they are out to get you, and you are not, in the pejorative sense, a “conspiracy theorist” if there is a conspiracy. I will not ask you to believe that the moon landings were faked or that Aliens built the pyramids or that a shadowy group of Illuminati or some such are behind world events, but Brexit and its ensuing chaotic “negotiations’ are the result of a conspiracy.

In its simplest expression, the Brexit conspiracy is this:

A group of wealthy persons, ideologically libertarian (or “neo-liberal” if you prefer) dreamed of being able to do business free from all accountability to regulations such as workers’ rights, environmental protections, consumer protections, and so on. They gambled that the way to achieve this was to convince the masses to vote for the United Kingdom to leave the European Union. To their own surprise they succeeded. They never had a plan on how to implement an orderly withdrawal from the European Union, not because they were incompetent, but because a “no-deal” Brexit was their plan all along.

Here is a good detailed account of the no-deal dream. 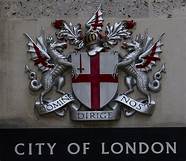 The impetus for Brexit is to establish in the UK a corporatist state without government oversight or accountability. This libertarian dream has been called by analysts “British Empire 2.0” and “Singapore on the Thames.” We could also add “Cayman Islands North.” No matter the label, the dream is to transform the UK (or mostly, The City) into a modern day pirate enclave of free-wheeling capitalism ruling over a reconstituted British Commonwealth. Corporations could operate in this free port with impunity, controlling natural resources in the former colonies and exporting financial services from Britain without social accountability that would hinder profits.

You may ask: “What about the people who voted Leave? And UKIP? Surely they didn’t vote to further enrich corporations?” True, but UKIP and its sympathizers were useful tools for the corporate “Singapore on the Thames” Brexiteers. The big money interests behind Brexit had a simple two-part plan to sell Brexit. Part one was to demonise the European Union as tyrannical overlords. Among other ploys, they dusted off an old right-wing myth and turned it into a lie about EU regulations about cabbages and similar stories about bananas and the like. Part two was to draw on the old right-wing demonisation of immigrants. The “barbarians are at the gates” message has long resonated with an ignorant and fearful segment of the population who can be manipulated to support right-wing agendas that further enrich the rich and powerful. The Leave campaign was a massive and partially illegal expenditure on bread and circuses to dupe voters into handing more power to corporatists.

Why the post-referendum Brexit process have been a shambles is explained when you understand that a libertarian corporate paradise is the impetus and grand plan behind Brexit rather than the various rationales used to justify Brexit. The Brexiteers have always wanted a no-deal as the quickest path to their goal. That no-deal is the goal also explains Prime Minister Theresa May’s strategy and actions. She is not incompetent or delusional (at least not that much); she is serving the interests of the no-deal Brexiteers.

The Brexiteers know that any withdrawal deal with the EU will blunt their corporatist dream and temper their pirate capitalism profits. May knows that the deal she struck with the EU (after two years of  bad faith negotiation) will never command a majority in the Commons. May’s refusal to consider any amendments to her deal or to consider any other compromise is because she has gambled that she can run down the clock to effect a no-deal Brexit. As of this writing (12 February 2019) May is putting off the vote on the withdrawal bill until just days before 29 March, all but ensuring a no-deal crash out from the EU. 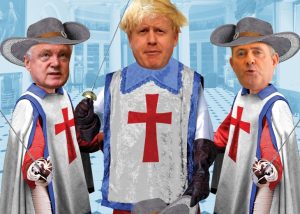 If you keep in mind that the goal is no-deal and the no-deal Brexiteers are running the Theresa May show, then every seeming twist and turn makes sense. We have to hand it to the Brexiteers and May that they have maneuvered things well to achieve their aims in the Brexit conspiracy. Focusing on one major issue illustrates this. The no-deal Brexiteers knew that The Good Friday Agreement legally required that there not be a hard border between the Republic of Ireland and the UK territory of Northern Ireland. Ireland and the EU knows this too, which is why they demanded what has come to be known as “the backstop” that keeps the UK in the customs union to ensure free trade without a hard border between Ireland and Northern Ireland. 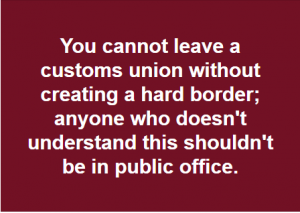 But here’s the thing: Britain cannot leave a customs union with the EU without creating a hard border with Ireland. To suggest otherwise is equivalent of saying you can have a square that is also round. The Orwellian speak of Theresa May and her cabinet that they can leave the customs union without creating a hard border means they are either incredible dim or knowingly lying. May was more than happy to designate the “no hard border” as one of her “red lines” negotiating with the EU knowing that the backstop was unacceptable to the Brexiteers and the Democratic Unionist Party of Northern Ireland. The deal with the EU was designed to fail. All the “going back to Brussels” to renegotiate the withdrawal deal to eliminate the backstop is subterfuge and delaying tactics to force a no-deal outcome.

Meanwhile, the May government is already taking steps to implement British Empire 2.0 while it is doing little to nothing to help the British people prepare for the no-deal crash that is coming. This is the plan. It has always been the plan. That is why the UK government has never been a real plan for an orderly withdrawal from the EU. It is a conspiracy of a small number of rich tycoons and the MPs that obey them (the European Research Group). It is a not so vast rightwing conspiracy, but it is a powerful one.

So what about Labour in all of this? They are not part of this Brexit conspiracy, but they do not have entirely clean hands. Jeremy Corbyn opposes some aspects of the EU because of its corporatist tendencies. He may be sympathetic to Britain leaving the EU. It seems though, that he has adopted the strategy of not interfering when your adversary is self-destructing. Just as Theresa May hopes that she can survive as PM through the coming no-deal disaster, Corbyn hopes that the no-deal disaster will force a new election and make him PM. Both leaders are betting that no-deal Brexit will help them politically and the stake with which they are gambling is the British people.

There remains a possibility of reversing Brexit, but it is unlikely. The damage has already been done to the United Kingdom and its people caused by the reckless ambition of the no-deal Brexit conspirators. It will get worse before it gets better. The Brexit conspiracy is an object lesson in how politics far too often plays out: the rich manipulate the system for their further enrichment. Not a very sexy conspiracy, but sometimes reality is not very sexy. There are no alien lizard people, secret government weather machines, Illuminati, or Jewish bankers; only rich people throwing around their money and influence. Same as it ever was.

Update: The day after I published my article, the Brexiteers in Parliament confirmed that yes, they want a no-deal Brexit. Plus: George Monbiot writes about the dark money behind no-deal Brexit.