Why Men Sexually Harass and Abuse Women
Skip to content 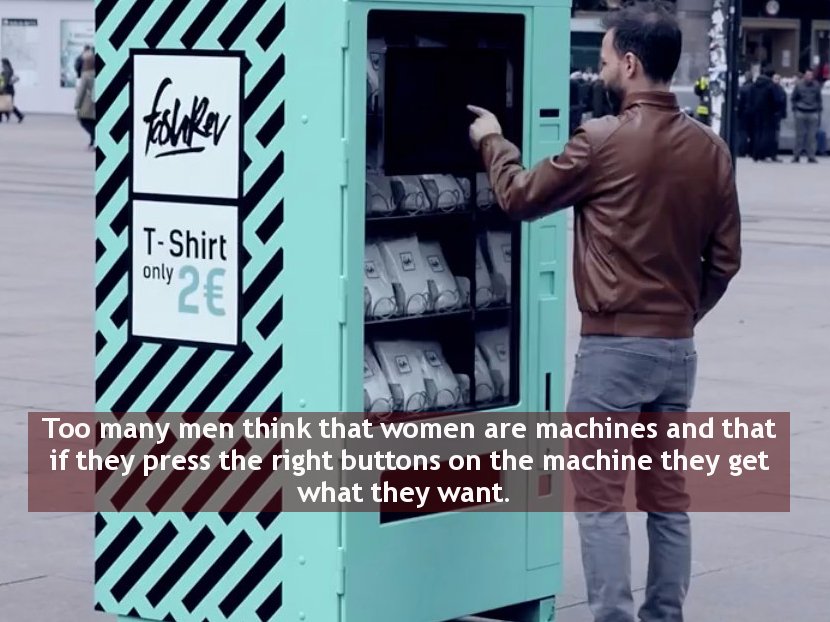 Amidst all of the revelations about high-profile men who have abused women, it is no surprise that our drive-by corporate media has not explored the question of why men sexually harass and abuse women. The media is interested in sensationalism and exploiting puerile interest in scandal. They are not interested in uncovering reasons. But the more revelations that come out, the more obvious it is that men’s sexual misconduct toward women is widespread. We need to talk about the fact that rampant abuse of women is happening, and we need to talk about why it is happening.

As much as I champion the importance of taking people and situations individually, I think it is safe to say that there is an overriding single source of men’s abuse of women.

Far too many men believe that women exist for their use, so they act toward women accordingly.  These men think that women are machines and that if they press the right buttons on the machine they get what they want. 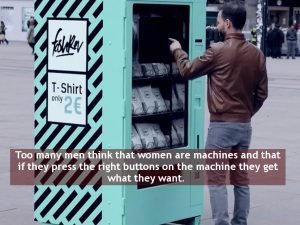 Most men are aware enough and mature enough to treat women as human beings. But far too many men view women as things to be collected and used. These men literally perceive and treat women as objects, and women are just one object among many that these men collect and use.

There is an old song, the chorus of which is the man saying his philosophy of life is “faster horses, younger women, older whiskey, more money.” (Tom T. Hall, “Faster Horses”) Outside of country music the male shopping list includes cars and more big screen TVs, but young women (chicks, babes, hoes, or whatever label is slapped on them) are included as items to be chosen, acquired, and consumed. What’s more, women are fungible—interchangeable commodities. Men at bars and clubs (and apparently Hollywood producers) look for whatever women are currently “on tap.” Other men collect women like any other object.

Too many men consider women as machines whose purpose is to dispense sexual pleasure. Sexual objectification of women has multiple forms and degrees, but the common denominator is the notion that women are the proper objects of male sexual desire, the proper purpose of women being to satisfy that desire. The idea too many men have about a date–that they can buy a woman dinner, tell her she’s pretty, and receive sex in return–is the idea of a woman as a vending machine. Put in enough money to buy food and drink and press the compliments button and get the reward.

That too many men think of women as vending machines explains many abusive behaviors and why men sexually harass and abuse women. Other men think so little of women (or are just too cheap) that they just selfishly take sexual pleasure from women. Men will fondle, grab, and force themselves on women because they think of women as objects to pick up and use and then discard without a second thought.

Patriarchy is a learned behavior

Sexual objectification of women is more than male fantasy–it is how men structure their world, and their culture tells them it is acceptable. The archetypal expression of women as objects is Hugh Hefner and his Playboy Club, though he hardly invented the idea of costumed women walking around serving male desires–they used to call them harems. Strip clubs and “gentlemen’s” clubs are more of the same. Worse, society tells men that women expect to be used, want it, and even that they enjoy it.

The book Fifty Shades of Grey seemed to cross a threshold in bringing sexual objectification into acceptability. Women are to be used and abuse and deep down they yearn for it. The television show Mad Men was only one of the most obvious messages that says to men that it is acceptable, even admirable, to objectify women–a symbol of male power and success. Some would say Mad Men was more about showing how things used to be, but its nostalgia for misogyny has been an integral part of Mad Men since its first episode showing us a “golden age” when women were treated appropriately and wouldn’t you guys want this too? These are only two extreme examples. From rap videos to commercials, we are told from birth that women are to be subjugated to men.

Sexual objectification of women is a social meaning imposed on them that undermines their autonomy and equal social standing even at times when they are not being used as an instrument to gratify male desire.[1] To objectify another individual is to see that person as not worth engaging with personally. We know that we have more latitude in how we treat objects than in how we treat other human beings, and we can use objects as we see fit. When individuals are objectified, they are objects for our use. In sexual objectification, the woman is excluded from personal engagement because her value is as a sexual object. She is not even a particular sexual object, she is a fungible one. She is a commodity to be bought, sold, and used. Men see the woman as having use value but not as an individual human being.

Women are often portrayed throughout culture and media as subordinate objects whose value is lessened if one actually interacts with the woman as a human being. To do so would reveal that the woman is not an object. This status of women as sexual objects that are not to be engaged with as individuals enables human trafficking and sexual slavery. Attempts by women to exercise their autonomy in opposition to their imposed social functions are met with stern and perhaps violent attempts to reassert their objectification. Women are to be silent and accept their subordination.

Patriarchy can be unlearned

Increasing reports of sexual abuse of women in recent years has exploded the absurd conceit that sexism is dead, that women are now treated fairly as equals, and that we have no need for feminism. The reasons why men sexually harass and abuse women are still very much a part of modern life. Openly talking about and condemning sexual abuse is the first step toward ending it. Addressing why men sexually harass and abuse women is the second. Changing social injustice requires changing our practices. Men need to be told what they are doing wrong and why they are doing it. Then they have to care enough to change.