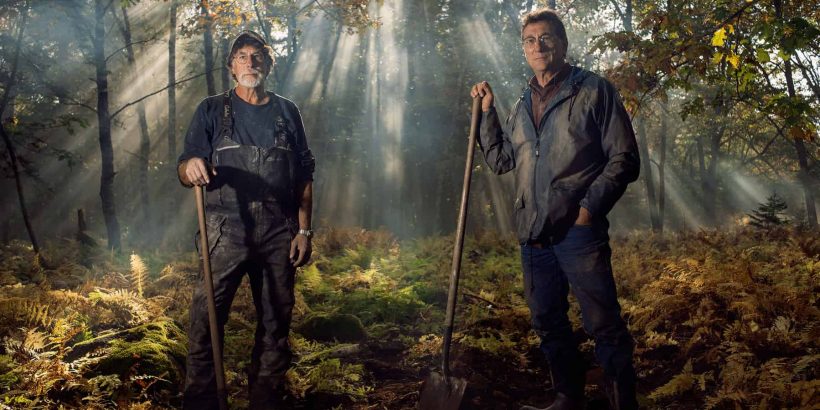 The problem with reality is that it’s not TV and the problem with TV is that it’s not reality. Reality unfolds according to, well, no particular plan. It just happens. If the TV show The Curse of Oak Island was fake, they’d been finding all kinds of stuff by now. They would’ve been finding things that are something more than a doorknob or something more than a spike or a nail. And yes, some smart alecky people will say, “oh, see, they don’t find anything interesting,” because they’ve been spoiled by how television is today and how the whole entertainment industry is today that if it’s not exploding or bleeding or car chases or whatever, it’s boring, it’s dull.

The Curse of Oak Island is not a typical reality TV show in that they’re sticking a bunch of people on an island and trying to get them to disagree with each other. It’s not a stage set; it’s a real place, and what the brothers Lagina and team are doing is not a reality TV show; they’re doing an archaeological exploration. Archaeology is dreadfully slow; that’s the nature of it, and that’s how it should be. Laird Niven is a professional archaeologist. he doesn’t just put a shovel in the dirt and come up with gold, because that’s not how reality works. It may be how fiction works, but The Curse of Oak Island is not fiction.

On the other hand, all the believe-anything people who want to say, “well , it’s definitely this, it’s definitely that,” there’s a certain lack of sophistication there too. Because again, things just aren’t what you want them to be, things are what they are. You need to respond to how things are.

Now the TV show is a different animal. The TV show is less than honest with us as I said in my video “Why Is The Curse of Oak Island Lying to Us. Because it did lie about the Zena Halperin map. It was not a Templar map. It was not dated 1347. They know this. The Laginas know this. Anyone paying attention knows this. But the show lies anyway, and continues to lie about this idea that it’s the Templars.

This of course encourages other people to lie, to just make stuff up. you don’t have to make stuff up if you’re willing to accept reality as it is. I’m not talking about social justice issues, don’t even go there. I’m talking about things like Oak Island. It’s science. We don’t just say, “this scientific result, I don’t like it, therefore I will disagree with it. That’s just not how it works; that’s not how reality works.

I later did a UFO video this summer about the supposedly big grand reveal from the Pentagon about the existence of aliens. I said you’ve got people who suffer from the ideology of believe-anythingism, and there are people who suffer from the ideology of skepticism—they don’t believe anything. we see that writ large in the whole UFO phenomena, and we see a very similar, very human difference in the response to The Curse of Oak Island.

But as I say in my video “To Those Who Say The Curse of Oak Island Is Fake,” just because they lie about one thing does not mean they’re lying about everything. It is annoying to me and to a lot of other people that as the Laginas, their team, and scientists go through the difficult, ponderous work of piecing together the Oak Island mystery, that the show has to keep throwing in nonsense. They’ve been better at it. At least we aren’t dealing with Roman swords anymore.

The fact that the show could do better though it detracts from the show; it does not ruin the show. I’m still hopeful, as we’ve seen the last few seasons, that kind of letting go of this sense of, “we must perpetuate this myth of the Templars to make it interesting to the audience,” that maybe now that they have a really huge audience for this show a lot of people who really want to find out what really happened on Oak Island, that the show continues to just let the science move forward, let the process move forward.

It now has been scientifically proven that there is some sort of precious metal treasure buried in the money pits and apparently in one other place at least on the island. Let’s see where the data leads us.

A brief aside about the two Laginas. Rick and Marty give us a wonderful combination to emulate. Rick is the believer. Not in the sense of he’ll believe anything—he’s quite discerning in what he is willing to believe—but when I say that Rick Lagina is a believer, it means that he has a goal. He has a dream, and that’s a wonderful thing to be: a dreamer. It’s his vision that allowed this to happen.

Marty is self-admittedly a bit of a skeptic. He wants to see the data. That’s a very admirable trait—yes let’s see the data. If you’re going to tell me that something is so, show me why I should believe that.

It is so a perfectly wonderful thing when you combine those two things. Then you create this wonderful synergy—a willingness to move forward, a willingness to look, a willingness to believe. That power is exploration with a skeptical eye of, “show me, don’t tell me, show me. When you combine those two things, whether you are two brothers doing it, or one person combining those two aspects of your own personality, that leads to productive results, because you’re willing to leave the dark cave of skepticism, of “I don’t believe in anything,” to go out into the world to explore the world. But then in that exploration to not be duped by every fake thing. To not be duped by every lie that people will tell you. Or be put off by any setbacks that are out there; that you didn’t see immediate confirmation of what you believed and therefore you just give up.

No, to really believe, to really have faith in what faith really means, is to be willing to keep trying. And these guys are still trying all these years later. How many hours? How much money have they poured into all of this? The Laginas have spent the time and energy.

Will something exciting happen this season on The Curse of Oak Island? I sure hope so. I’m sure you sure hope so. Let’s find out.

Something is buried there.

Keep your expectations reigned in, but keep believing that a result can be achieved.