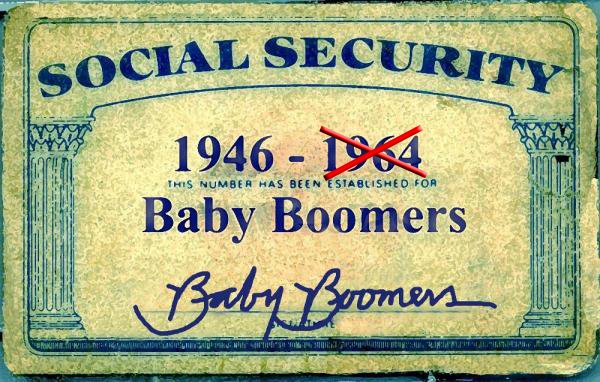 The corporate media loves simplifications. It enjoys painting with a broad brush and placing everything into tidy, constricting categories. One of the media’s simplifications is to label people as belonging to a generation. They claim you are a “baby boomer,” a “millennial,” a “Gen Xer,” or so on, defining you by the classification to which they have consigned you. Thinking in terms of generations isn’t completely silly, but the current thoughtless pantheon of generations is largely meaningless.

There are no millennials, and no such thing as Gen X or Gen Y or any of the even more vacant media fictions.

The media-created generations are empty notions that tell us little about who people are or what their experiences may be. For concepts to be useful, they need to define tangible phenomena. Talking about people in terms of generations makes sense only if we avoid simplistic characterizations. We need to instead consider how different significant historical events differently affected people. Different experiences, especially during people’ formative years, lead people to differently perceive their world. Let’s look at how we can discuss generations in a useful way.

In our quest for meaning, we start with the generation easiest to define. The post-World War II baby boom was a tangible phenomenon, but the “baby boomer” concept has become overused and overextended and has lost meaning. It is now more parody (“Okay, Boomer”) than anything else. Nevertheless, we can definitively point to 1946 as a generational marker because the number of births exploded coinciding with a sea change in the world after the end of the war.

How many years constitutes a generation? We all belong to a generation, and we share with our generation a series of world events and cultural references like books, music, films, TV, and fashion. Those shared experiences are what define a generation. We will always have individual differences as we express our free will, but we share a set of influences with people our age and a few years younger and older than us. The events of our formative years have a significant influence on our attitudes. I consider the formative years to be between the ages of 5 and 17. Younger than that, you don’t remember, older than that, you are an adult who responds to events from a greater sense of self. People who are more than 12 years different in age have experienced quite different influences. Someone graduating from high school in 1964 has a very different set of influences than someone graduating in 1982. There is no rational reason to say they are of the same generation.

That the baby boom generation started in 1946 is obvious; the number of births skyrocketed that year. When to call an end to the baby boom generation is the question. The birth rate has never returned to the pre-1946 level in the United States. If we went by when the baby boom peaked, that would be 1961, not 1964. My objections still apply to lumping the 15-years between 1946 with 1961 into the same generation. It is difficult to find a good cutoff, but I will offer my theory, a theory that leads to a sensible definition of generations.

On the basis of my premise that events during our formative years define a generation, I tag the end of the baby boom generation at 1957. The assassination of President Kennedy in 1963 is one of the most defining events of the 20th century. America changed that day, and if you were old enough to understand that something important had happened, you were affected by it. I take 5 years old as an age when you can at least start to understand that an event is significant, even if you don’t fully understand why. If you born after 1958, the Kennedy assassination had less effect on you. If you were in the formative ages of 5 to 17, in 1963, you were affected by the assassination differently than were older people. The event significantly affected how those young people looked at their futures within a changed world. From this perspective, those born between 1946 and 1958 can be said to be of the same generation, the baby boom generation. Obviously, the Kennedy assassination was not the only event this generation shared, just the most significant one.

All of these people were in K-12 school at the time of the Kennedy assassination and come of age during the resulting changes in how America viewed itself. A certain loss of innocence affected how this generation looked at their future. There are certainly still differences between those born in 1946 and those born in 1958, but I think there are enough similarities to place them in the same generation. This leaves us with a more sensible 12-year range, rather than 18, for the baby boom generation, bookended by World War II and the assassination.

Does this approach work for other generations? Not as perfectly, because the birth explosion beginning in 1946 is unique, but it can help us understand generational similarities. The 9/11 attacks of 2001 were also defining events. If we apply the same criterion of people being 5 to 17 years old affected similarly by the 9/11 attacks, then those born between 1984 and 1996 could be said to be of the same generation. A loss of innocence occurred, similar to the Kennedy assassination, and the new “War on Terror” defined a new way of looking at the world and our place in it. The attacks of 9/11 affected how this generation looked at their future more than it affected older Americans.

What about other birth years? The two generations before the baby boomers are easier to sort out. In general parlance, the generation born before 1946, roughly 1928 to 1945, has been called the “silent generation.” This is because this generation supposedly were withdrawn and inactive. Those coining this label were either willfully or irresponsibly ignorant about the American Civil Rights Movement that this generation spearheaded. Calling this generation the “Lucky Few,” as does the Population Reference Bureau, makes more sense because these people graduated high school between 1945 and 1962. They were too young to be conscripted in service in WWII, but benefited from the expanded opportunities of the postwar socialism-stimulated economic boom of the 1950s and 60s.

The GI generation, born between 1914 and 1927, served in World War II, and they benefited even more from that boom cycle (at least those fortunate enough to survive the war benefited). That generation came home from the war aged 19 to 37 and received all of the socialist GI benefits granted by the government. They also gave birth to the baby boom generation. I will pass, at least for now, on generations born before 1914, who were adults when the Great Depression hit, and move to consider generations after the baby boom.

The people born between the end of the baby boom generation, 1958, and the beginning of the 9/11 generation, 1984, are more difficult to describe. We have all endlessly heard people in this group called “Generation X” after the Douglas Coupland novel. It is a catchy but empty phrase in the hands of the corporate media. The range of years, even if we accept the untenable date of 1964 for the end of the baby boomers, is too large to be one generation. Adjusting the baby boom generation end date to 1958 leaves a 26 year gap to the beginning of the 9/11 generation.

Pursuing the idea of significant world events, I look to 1977 as a significant date. 1977 was the arguable beginning of the home computer revolution with the release of the Apple II. The next few years saw releases of the Atari 400/800 (1979), the IBM PC (1981), and the Commodore 64 (1982). The world changed over those years, solidified by the advent of Lotus 1–2–3 in 1983 and dBase II in 1984, which changed the working world. Many people who reached high school and the working world in the early 1980s were affected greatly by the personal computer. If I want to coin catchy phrases, I can call those people, born between 1959 and 1971, the “PC generation” (with apologies to Mac users). The PC generation grew up in an analog world but entered adulthood as that world shifted into the digital age.

Similarly, the coming of the World Wide Web to the general public in 1994 (when the PC generation was aged 23 to 35 and baby boomers 36 to 48) marked the beginning of another significant shift in how people did things and thought of themselves. The PC generation was primed to adapt the new Internet era, but it wasn’t until after 2001 that the Internet became a “must,” and not until 2006 that smartphones revolutionized mobile habits. The digitized generation is, for me, anyone who was born after 1996. These people have never known a world without the Internet, the War on Terror, 100+ cable TV channels, and cell phones (smartphones since 2007). This generation’s existence has been thoroughly digitized with entertainment on demand requiring very little effort. They are the digitized generation, their lives a constantly repeating loop of audio/video experiences and text app communications. Now, this generation is reaching adulthood — the first generation with fewer real-life opportunities than previous generations.

Then there’s the COVID-19 pandemic. It is a hugely significant event that changes how people do things and think about their future. Exactly how, we will not know for years. Like the Kennedy assassination and the 9/11 attacks, the pandemic will be the defining event of a generation. Using the concept that the formative ages are 5 to 17 years old, we would define the COVID generation as people born between 2003 and 2015. There is overlap between the COVID generation and the digitized generation, with the pandemic lockdowns reinforcing the digital side of life and communication. We will see over the next two decades how these people, in 2021 under the age of 25, respond to the pandemic’s aftereffects.

That leaves us with the in-between generation. These children of baby boomers, born between 1971–1983, came of age came after the PC revolution and before 9/11. This is not a lost generation but one caught between recognized cultural trends. Calling them “Generation X” is a bit of an insult. These people are now 38 to 49 years old, the prime advertising demographic that few can define and few listen to. They have the chance to become political power brokers. Will they take it?

A Table of Generations

All of these thoughts lead me to the following loose definitions of generations over a period of about a century. This formulation is not perfect, but it’s a big improvement over the haphazard terms currently used.

What I like about this table of generations is that we can think of the generations as roughly equal periods delineated by significant cultural shifts as the generations came of age. No doubt, I am not putting an end to arguments over defining generations. If nothing else, though, I can lay to rest the empty “millennials” label, the even emptier “Gen Y” and “Gen Z” labels, and the absurdity that someone born in 1964 is a baby boomer.

The takeaway from this exploration is that it is better to think about people in terms of their life experiences rather than vague marketing labels. Doing this, we respect people by focusing on where they are coming from and how they perceive the world. We need to never reduce individual people to mere members of a group, but a sensible view of generations helps us to understand the set of influences from which individual people start.