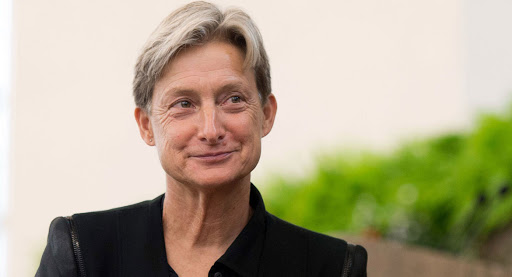 One philosopher who has written about nonheteronormative philosophy is Judith Butler (1956- ). She has written a series of books that have shown gender to be a social construction and that gender is therefore a set of concepts and stylized repetitive acts that reflect the dominant power structure. Gender, she argues, is performative; one acts male or female within the frameworks that determine for people what their possibilities are for gender, sex, and sexuality. The supposed binary nature of biological sex has led to assumptions that gender and sexuality should also be binary. Butler calls instead for an open critique of sex and gender. For her, that includes how feminism has used the concept of “women” as an objective, discrete, ahistorical group. Butler sees this as a mistake that has reinforced the binary view of sex and gender. Instead of trying to define “women,” Butler says that feminism should focus on providing an account of how power functions and shapes our understandings of womanhood. Butler also takes aim at the concepts of homosexual and heterosexual, seeing them as limiting, binary identities. Her idea that sexuality is performative applies here also. One repetitively acts as homosexual or heterosexual, imitating how the categorized identity is defined. This is the case even though acting as a homosexual may include exclusions and concealments.

Butler says that many of the performative acts of sex, gender, and sexuality are performed without conscious awareness. The social constructions of gender identities are social norms to which we conform because we are taught to do so. Such is the case for all social norms—that’s why they are norms—these are the definitions of how we are to act. Butler calls for breaking the socially defined linkage of sex with gender, allowing for people to develop their gender and desires freely and flexibly. One’s gender and sexuality would still be performative, but an individual’s acts would stem from who that person is, not from a social construction. Individuals would not have an identity limited to the expression of any binary structure.

Butler’s work has been instrumental in the development of ideas of nonbinary gender identities and has helped establish the field of queer theory. Butler opened a door onto possibilities for dispensing with the traditional narratives that heterosexuality is the only acceptable norm and for people not needing to take on compulsory identities as “man,” “woman,” “heterosexual,” or “homosexual.” We’ve seen in this book how when someone opens a door, people will go through it. This has indeed happened with this door to a society accepting of nonheteronormative identities. When we’ve looked at previous times when these philosophical doors have opened, we’ve had the advantage of being able to analyze what happened from the perspective of many years later. Butler and others have opened this philosophical door less than 30 years ago. It should not surprise us that the field of nonheteronormative philosophy is still very much in flux. Currently, there is much debate over approach, terminology, and goals. One problem the field must resolve is that if “queer” is defined in opposition to “normal,” than no matter how broad the concept of “queer” is, it remains a binary definition that can quickly become yet another us-and-them binary opposition and excuse for division and oppression.

That all nonheteronormative people should be recognized as having full human rights should be obvious. Actually, that all people should be so recognized is obvious. As we’ve heard a number of philosophers of feminism and race say, we need to respect differences and listen to individuals’ lived experiences. We are all on a quest for understanding. The best approach to our personal quest for understanding is to be open to understanding people for who they are and listening to what they have to tell us.
–