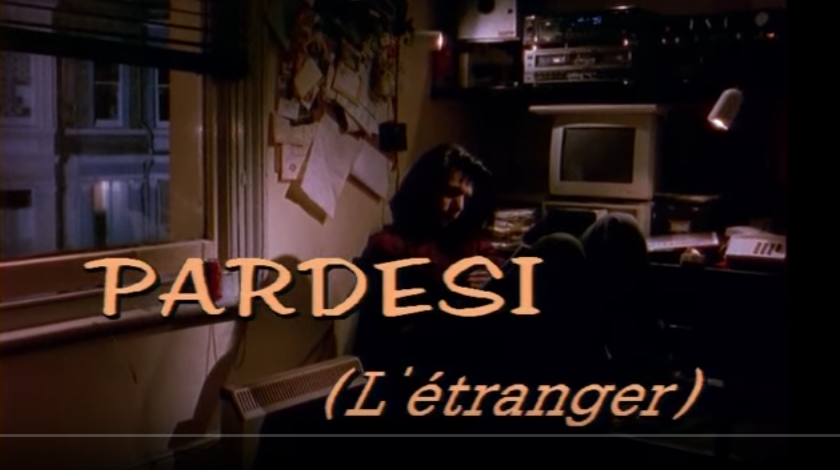 This is a rare documentary, Pardesi, filmed in 1991 by French filmmakers Martina Catella and Michel Follin, produced by PMA-Ethnies Visions. Most of the dialogue is in English with French subtitles throughout. The word “pardesi” means foreigner or stranger in (ironically) both Urdu and Hindi, from par (other) and desi (country).

The film follows Aki Nawaz (Southern Death Cult, Mynta, Getting the Fear, Fun-Da-Mental) as he explores the meaning of the Asian Underground music scene that was emerging in England in the early 1990s. But this is not a straight music documentary but an exploration of the combinations of spirituality and music and East and West. Nawaz speaks with a number of musicians and scholars and we get some interesting insights on how cultures and music can clash but also can blend and fuse. The film reflects on the problem of identity faced by the children of immigrants who grow up needing to reconcile and balance multiple cultures. Nawaz remarks that “we have a duty to understand our traditions and decide which values we wish to keep” and he seeks to understand how to express the problem of identity through music and the question of how to mix spirituality and music.

Central to the consideration of these questions for Nawaz is his Islamic faith and its tradition. In one scene, Nawaz asks Dr. Akbar Ahmed (formerly Chair of Pakistan Studies at the University of Cambridge) “Can I be a musician and a Muslim?” Dr. Ahmed’s basic answer is yes, if done in the right spirit, and among Dr. Ahmed’s words of wisdom is this: “Go back to your roots, go back to the source, to the book, go back to your own music, and once you do that, I think the answers will come themselves, because you have to resolve modernity and tradition–your father’s time with your time.”

So Nawaz travels back to Pakistan to talk with and hear from musicians there. We hear some beautiful traditional music from Pakistan and learn about its genres and their histories, including Bhangra, Ghazal, and Qawwali. The ever-serious Nawaz respectfully watches, listens, and records. but doesn’t seem to quite find the answers he seeks. Perhaps, as Ustad Ghulam Hassan Shaggan says to him, it is a matter of perpetual research.

The film is serious, at times brooding, but never descends into maudlin sentiment. It remains always a celebration of South Asian traditional and fusion music. The film is beautifully shot and pieced together. We also get to meet some artists central to the about to explode UK Asian Underground (Talvin Singh, Farook Shamsheer (Joi), Sheila Chandra, Najma Akhtar, and Bally Sagoo).

There is too much in Pardesi to discuss it all and you should discover them yourself. The film spoke to me even though I have little in common with the people in it despite our common humanity and love for the music. Yet, I think it all translates well to those of any culture who are open to what it means to be human. That is the beauty of world fusion to me: there are many musical genres but they are sub genres of human music. For example, I hear the mournful love song of Ghazal singer Farida Khanum and it reminds me of Portuguese Fado. They connect, intertwine, and speak to each other.

Pardesi is also a brilliant glimpse into a pivotal time in music history. The world fusion revolution was just starting. There in Bradford, Yorkshire were some of the people who helped kick it off just before they burst into prominence. So much has changed because of so much learning and sharing. One musician tells Nawaz in the film that “bhangra is essentially Punjabi, there is nowhere else in the world where you have the bhangra.” Nawaz says respectfully off camera, “except in England.” Now 27 years later we can say, “except everywhere.”