One of the terms bandied about lately is “toxic masculinity.” The basic idea is obvious—that some men are so fixated on demonstrating how “manly” they are that they harm themselves and others in the process. I tend to frown on the use of labels, and like most labels, “toxic masculinity” points to something real and serious, but does not tell us what’s going on.

Why would someone refuse to help others by wearing a face mask? For most, if not all, of these people, it is a fear of appearing to be weak. I think it’s a combination of not wanting to appear to be afraid of the virus, not wanting to be seen to be dictated to by others, and not wanting to be seen heeding other people’s concerns. The many comments on social media by these mask averse people tend to relate to one of these three fears. 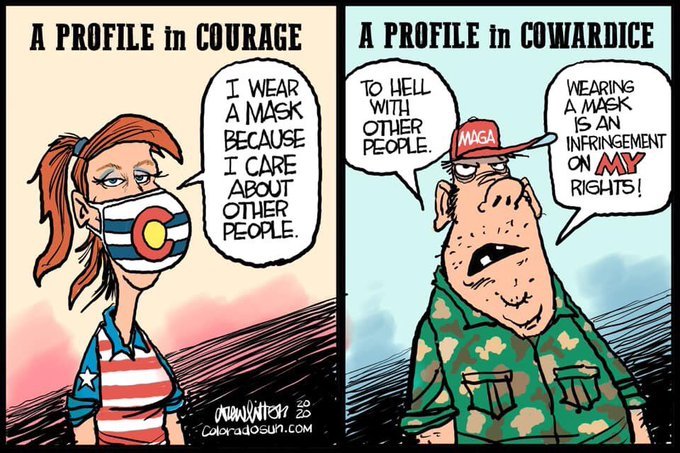 These three fears drive all displays of toxic masculinity: fear of appearing afraid, fear that someone knows more than you, and fear that you are submissive to others. The common denominator is the fear of appearing weak. It’s like when guys wear shorts in the winter, strap on a gun, brag about how much money they make, try to out drink each other, and all that other macho silliness. They want to look the tough guy and in their fantasies, tough guys don’t wear face masks.

The fear of appearing weak also drives much of right-wing politics. Look at the triad of Trump, Boris, and Putin. Even tough Putin is the only one who looks decent shirtless on a horse, they each fantasize themselves as the tough guy hero. They’re manly tough guys who don’t listen to the experts, never admit they could possibly make a mistake, and above all is tough on all those “weak” people who can’t be as tough and oblivious as them.

Right-wing leaders gain power by appealing to base fears in people. The central fear they exploit is fear of the Other, and second is the fear of appearing weak. To use just one example, it’s hardly surprising that the poster child for toxic masculinity, Clint Eastwood, went from glorifying police brutality in films to insulting an empty chair at a GOP convention. Can’t show the weakness of civility and respect for others. Then they glorify their own fear-driven depraved indifference as “did society a favor.”


I’ve written elsewhere that bigotry is cowardice, and that racism is structural cowardice. Structural racism tell us that those who are different from us are inferior to us. They are immoral. Stupid. Deviant. Dangerous. These false stories give the bigot who is driven by fear of the Other a justification for their fear. The stories also appeal to their fear of appearing weak. What easier way to feel strong than to adopt the fantasy that others are weak and inferior.

What’s true for race-based bigotry is true for bigotry and fear based on gender, sexuality, ethnicity, and religion, among others. It takes courage to accept others who are different. Not everyone has that courage. For the fearful man, it is easier to feel strong by adopting the fantasy that women are weak and inferior. God forbid they make the effort to deal with women as equals. All bigotries share this same structure of compensating for cowardice by fantasizing that others are weaker.

I bet that widespread among right-wingers is the belief that only weak people would catch the coronavirus. It’s an absurd fantasy. But, that racial minorities, who structural racism keeps impoverished and with less access to health care, have suffered more from coronavirus, seems to verify the right-wing fantasy. “Only weak, inferior people catch the coronavirus, why should I wear a face mask?” It’s another form of fear-driven bigotry toward others.

In the coronavirus pandemic, the right-wing politicians were reluctant to order the restrictions on activities that experts said would save lives. They didn’t want to appear weak. I need not repeat the many machismo-laden pronouncements by right-wing politicians about how the coronavirus was not a real threat, would go away on its own, and was under their control. Total nonsense. Lies upon lies. But lies crafted to appeal to their right-wing base who are also infected with the fear of appearing weak.

Meanwhile, leaders with real strength listened to experts, took appropriate steps, and saved lives. Funny how they are the ones who look like strong leaders.

Face it. If you refuse to wear a mask, you are a coward. Oh, and an ass; definitely an ass. And if you weren’t a coward, you wouldn’t need to act like an oblivious ass to make yourself feel tough.

So, as much as I appreciate the label “toxic masculinity,” I suggest we call that behavior what it really is: cowardice. A strong person doesn’t need to show others that he or she is strong.