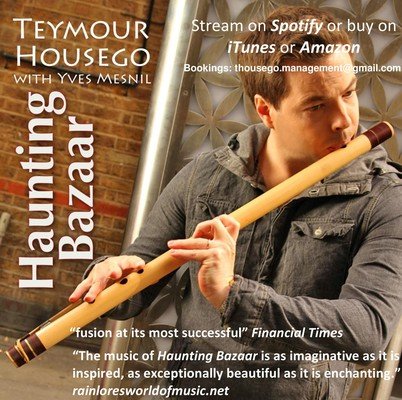 by Teymour Housego with Yves Mesnil

Co-composed with French guitarist and singer Yves Mesnil. Haunting Bazaar reflects Indian flautist Teymour Housego’s personal musical journey. The album fuses together the sounds Teymour grew up with as a boy in India with the sounds he picked up through the decade he spent between London and Paris exploring the wealth and diversity of musicians these two cities have to offer. Many of those musicians he has brought together on this project.

Teymour grew up in India and learned the bansuri under Prakash Saxena in Delhi and Pandit Ronu Majumdar in Mumbai. The bansuri is a side blown bamboo flute from South Asia found in many parts of India, Pakistan, Bangladesh, Sri Lanka and Nepal. It was purely as a result of his mother not being able to find a Western flute teacher that he began learning the bansuri.

The bansuri is a prominent instrument on Haunting Bazaar, a sublime collection of transcultural songs and vocally-infused instrumental pieces. Some songs on the album are acoustic while others are laced with a dash of electronica, mixed perfectly to give the songs an ethereal feel that is grounded firmly in the Indian landscape. Supporting Teymour’s haunting bamboo flute playing is Yves Mesnil’s unique style of lyrical guitar playing, sublime tablas and other Indian percussion, and entrancing atmospheric vocals by multiple singers.  The album features British singer Tina Grace, Sri Lankan singer Manickam Yogeshwaran, Malian singer Kassé Mady Diabaté, and percussionist Steve Shehan, among others. British-Asian producer Niraj Chag also lends his hand to a remix.

Haunting Bazaar is Indian fusion at its finest; relaxing yet energizing. Teymour and Yves’s musicianship is beyond question and I also really enjoy Yogeshwaran’s intricate vocalizations and Sujit Mukherjee’s intricate tabla playing.

Available to purchase on iTunes, Amazon US, and Amazon UK and stream on Spotify.

More about the Bansuri: