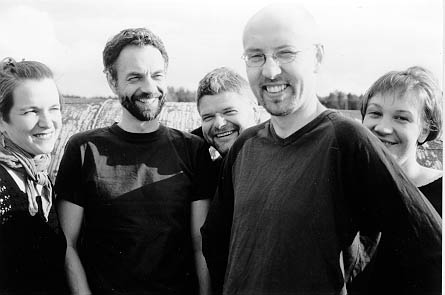 In the first two blog posts, I shared with you three CDs that changed my musical journeys in 1999. A year later I discovered a fourth CD that was almost as influential and talk a little about Scandinavian Music. That was the album Tra by the highly successful Swedish group Hedningarna. Their name means “heathens,” which is not a religious or political statement (though the notion of a return pre-Christian Nordic traditions is strong in those countries) but one of musical intent—as in “NOT ABBA!” Okay, they are not totally about not being Abba, but they are very much about returning to the roots of Swedish folk music. Formed in 1987, they resolved to not only undo the modern corporate trappings of pop music but also the more modern instruments of contemporary folk music. They adopted ancient instruments and techniques to reanimate long lost folk tunes on their first album, Hedningarna (now sadly out of print). For their second album, Kaksi! (now sadly also out of print) they teamed up with two female singers to bring the dark ethereal tone of Finnish music into their repetoire. Then came Tra which blew the doors off completely of folk music with an intensity that sounded so alien it almost created a new genre. For Hippjokk they teamed up with Wimme Saari (more on him later) and continuing their Finnish explorations, Karelia Visa. It was 10 years until their next album in 2012 & where the three male Swedes at the heart of the band, now armed with instruments they invented, renewed their intensity with a now decidedly masculine edge. Just last week, they released a new album Kult, which contains 20 previously unreleased tracks from 1992-2006.

The idea of a return to primitive Nordic musical traditions has been picked up by multiple Nordic groups. Norwegian Wardruna claims their music interprets the runes of the Elder Futhark (one of the ancient Nordic alphabets. I don’t know what that means, but it is clearly not a joke and they are clearly very good. Whereas only some of Hedningarna’s is dark slightly menacing music, all of Wardruna’s is. No surprise they were asked to help compose the music for the TV show Vikings (they band members look like they just walked off the set). Despite one of their founding members being a former black metal singer, Wardruna avoids any rock clichés, their music more like Tibetan or Gregorian chants with more percussion. Watch this amazing live performance featuring a joik singer.

Mari Boine and Wimme Saari are leading Sami artists who blend the traditional chanting style of Sami music known as joik (think of a cross between. Both have actively blended modern electronics with their folk music. Both are difficult to find in the U.S. now though there are upload collections on YouTube for Mari Boine and Wimme. Boine has worked with a number of ambient and folk artists and released several of her own albums. Wimme’s music has been described as Finnish ambient techno chant and has released seven albums.

Garmarna is another Swedish roots group similar to Hedningarna but with more fiddle. They also did a very interesting album interpreting the chants of Hildegard von Bingen. The on-off project Hurdy-Gurdy combined members of Garmarna and Hedningarna.

There is also Värttinä, a Finnish group centered on three female singers, though they are mostly a straight folk group.

I could name others like Insinkt, Gjallarhorn. Korpiklaani, Ivar Bjornson, Kaipa, and others but they are even more obscure in the U.S. and you may have more luck on Amazon U.K. or specialty European sites.

Thanks for reading, thanks for listening, and thanks for supporting World Fusion Radio.