Of course I know some think this way, but it’s still a shock to see it. But as a philosophy professor, I recognize a teaching opportunity when I see it. I wrote before about how racism is cowardice and now we can see how this kid’s diatribe vividly demonstrates how sexism is cowardice.

I moderate the /r/PhilosophyNotCensored/ subreddit and received a submission from this kid about his “unique” argument about women’s rights. The “argument” was this short diatribe on Twitter:

Let’s insert some philosophy here. First, these thoughts are hardly unique; they are as old as sexism itself and sexism, the father of all bigotries, is as old as civilization. The “argument” is simplistic: women only receive respect if they conform to men’s expectations. That’s exactly what “Mark” says. That’s what some men have said for many, many centuries.

Second, if there was ever a plain definition of sexism, “Mark” has given it. Men are the judges of whether a woman is acceptable or not. “Mark” makes it clear what sexism means: women have no rights, only privileges granted by men. Men decide what women are allowed to do and women only get to do anything if they have first pleased men. Women need to act properly, as defined by men. In “Mark’s” sexist view, women are to be treated like dogs: they only get treats if they behave.

Finally, men like “Mark” think and say these things because they lack courage. They need to have women behave in certain, narrowly proscribed ways or they can’t handle it. They lack the courage to accept women for who they are. And “Mark” here wants the state to protect him from independent women.

Demanding that women act “in accordance with men’s expectations of femininity” is not strength, it’s simpering weakness. People with fortitude have no need or desire to try to control others. Only a weak person feels threatened by other people having rights. Weak men like “Mark” need to cover up their fear of independent women by creating stories like he Tweeted. They use these stories to convince themselves that they’re right to fear and hate women.

I’ve given “Mark” more notice than he deserves, but it’s important to point our that his fearful reactions to women are not unusual. Fearful “Marks” are far more common than we want to believe. This kid simply posted in public what is said all the time in board rooms and pubs and right-wing Internet chat rooms, to name but a few. That’s weakness masquerading as strength. All bigotry is weakness. Telling yourself that women don’t have rights is cowardice. A strong man is a feminist. 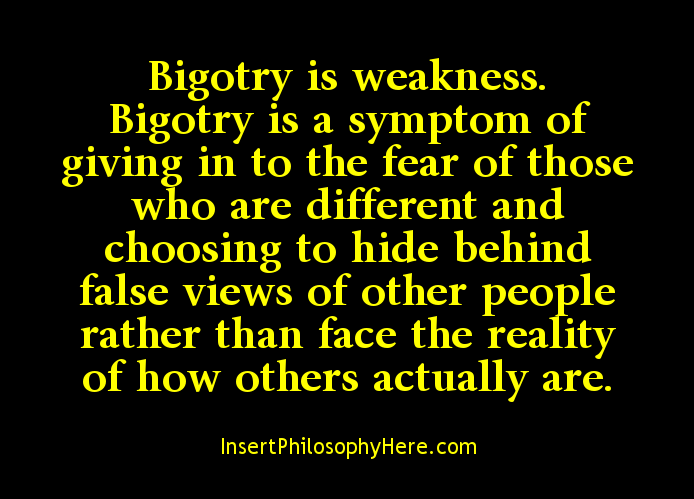