It shouldn’t be a political debate, but somehow it is. What should we as a society do in response to the Coronavirus pandemic? Seems obvious to anyone with any humanity: save people’s lives. Bizarrely, some feel we shouldn’t spend efforts to save people’s lives–in particular, right-wingers from the US, UK, and Brazil. Some are even hostile to attempts to help people survive the pandemic. We need to insert some philosophy into this to understand it.

The bizarre political differences on the Coronavirus pandemic has led to two very different responses. Some societies’ governments responded by taking steps recommended by scientists to save lives: establishing quarantines and requiring the wearing of face masks. Other societies’ governments responded by ignoring scientists and doing little or nothing to save lives, muttering stuff about “the economy” being more important. We can shorthand these different responses to people first and “the economy” first.

One could view the different responses to the pandemic as short-term thinking versus long-term thinking. Putting “the economy” first and avoiding quarantines is the short-term view of resisting change. Putting people first is the long-term view–we sacrifice now for a better tomorrow; the economy will come back and we’ll be there to benefit from it. The problem with the short-term thinking of “putting the economy first” argument is that only consumers drive the economy and dead people can’t buy anything. Being sick also tends to depress economic activity. Saving lives and protecting people from disease is the best way to maintain society’s overall economic health.

Nevertheless, the corporate world is driven by quarterly reports and stock prices and the corporate world drives governments, so short-term thinking dominates the considerations of policymakers. The economy-first approach is focused on short-term results because “the economy” means satisfying the investor class. Bondholders, stockholders, and corporate executives have more say in how society is run than the mere mortals who have to work, so businesses stayed open in the midst of a pandemic. A side-effect of the economy-first response is that because those who work for a living are more susceptible to exposure to the virus, rates of infection has increased in those societies in which workers were forced to work.

In societies that put “the economy” first, so many more people got sick and died that there had to be quarantines anyway. The delayed lockdowns caused as much if not more economic damage than the swift lockdowns enacted by societies that put people first. The investor class then went to their governments with their hands out. Funny how they always do that when things go bad. Societies in which the investor class dominates saw massive government welfare to the richest of that society. Bailout packages worth billions, even trillions, of taxpayer dollars mostly went to the wealthiest. Oh, and a small percentage of it went to working people.

If we go by the standard right-wing talking point, a government giving away taxpayer money to people is called “socialism.” Right-wingers hate what they call “socialism,” because they believe money goes to poor people and minorities. They made little, if any, outcry against the pandemic stimulus packages governments gave to people; probably mostly because so much of that “stimulus” went to the wealthiest. They seem fine with that.


Right-wingers also complain, a lot, about rules, which they also call “socialism.” Rules were imposed to protect people from the coronavirus like wearing face masks and social distancing. Many right-wingers seem offended at the suggestion that they should care about the well-being of others. They are really offended at the thought that government tells them to care about the well-being of others. They have demonstrated this in their violent anger against wearing face masks.

What many governments have done in response to the coronavirus pandemic is one, provide money to people to help them weather the economic damage caused by the pandemic, and two, set down rules to protect the physical well-being of people from damage caused by the virus itself. Experts have applauded these governmental actions that right-wingers call “socialism.” Economic experts approve of the need for government spending to help businesses and health experts approve of the need for governmental rules to protect people from the coronavirus. So, if government being involved in the economy and establishing rules for personal behavior is, as right-wingers declare, “socialism,” then experts agree that this “socialism” serves to help and protect people from the pandemic. 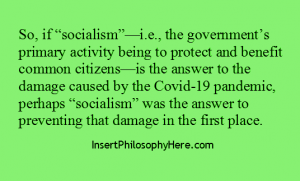 There’s little doubt that those societies whose governments acted to put people first have fared better in the pandemic. So, if “socialism”–i.e., the government’s primary activity being to protect and benefit common citizens–is the answer to the damage caused by the coronavirus pandemic, perhaps “socialism” was the answer to preventing that damage in the first place. Perhaps the proper role of government is to help all of the people all of the time, i.e. - socialism, and not just bail out the wealthy when things go bad.

This is when right-wingers will shift gears and suddenly say “that’s not what socialism is.” They they try to erect a different definition, so they can attack their fictitious strawman and deny the tangible benefits of socialism.

What is “socialism” really?

“Socialism” is one of those terms that can be easily bent toward people’s preferred narrative, some that end up destroying all meaning of the concept. Some trot out the Webster dictionary definition that socialism means government ownership of everything. That definition isn’t accurate because it leaves out the most important aspects of socialism and replaces it with a false notion that fits a particular political agenda. Webster, it is worth noting, recently agreed to change its long incorrect definition of racism. Someday they will change their long incorrect definition of socialism.

On the one hand, Ludwig Wittgenstein was correct that to understand the meaning of a word, you need to look at how it is used. On the other hand, if usage of a word goes so far off track that it is no longer rooted in its own language then the word needs to be reanalyzed. This is what has happened to “socialism” in the English language, mostly American English. Political agendas have twisted the word “socialism” into a strawman unrelated to its root meaning.

The etymology of “socialism” is plain to see.

A “society” is a group of people sharing common traditions and collective activities. From that we get “social”–of or relating to human society. Add the suffix “-ism” and we get the practice, characteristic, or theory of the social, similar to how by adding the suffix “-ology” we get the study of society, sociology.

That socialism is related to society–people–should be obvious. The strawman definition of “socialism” removes the etymology of people-centered practice and replaces it with the idea of governmental fiat. That strawman is mostly used in arguments advocating for political systems that restrict power to a small group of elites. There’s an ironic consistency in this. Hierarchies of political and economic power exclude the majority of people in a society and can be considered to be anti-social. In contrast, greater political and economic inclusion of people would, by definition, be pro-social. There’s a word for pro-social practices, characteristics, and theories and that word is “socialism.” Anti-social practices, characteristics, and theories would be “anti-socialism.”

Returning to the issue of the wearing of face masks, it is obvious that actions that endanger others is anti-social behavior. Despite denials from right-wingers (many of whom also deny such realities as climate change), face masks do help prevent the spread of disease. News flash: that’s why surgeons wear them. No one claims that face masks are perfect at preventing disease, but as part of a coordinated strategy to protect people, face masks are effective. To refuse to wear a face mask is to deny science, sense and reason, and moral responsibility. Refusing to wear a face mask is anti-social behavior.

Let’s return to an earlier point. If “socialism”–i.e., the government’s primary activity being to protect and benefit common citizens–is the answer to the damage caused by the coronavirus pandemic, perhaps “socialism” was the answer to preventing that damage in the first place.

If society prioritizes the welfare of people in society, then it will direct its government to act to protect and benefit common citizens. Government should be by, for, and of the people, yes? That political philosophy is socialism: theory and practices that are pro-social, pro-people. A government that serves the people, truly represents the people, and is responsive to their needs will benefit society. Why would anyone be against that?

Not everyone wants an equitably fair society or a government that serves everyone. Some people want a two-tiered society divided between haves and have-nots. Whatever they want that division to be based on–race, ethnicity, ideology, etc.–the common denominator is their opposition to “socialism,” because “socialism” doesn’t deny power to people whom the anti-socialists want deprived of power.

Do we help people or not? Why is that even a question? There are no simple answers that perfectly solve all problems. It remains the case, though, that a better society begins by resolving that we want one. Despite the anger and strawman arguments of the right-wing, the coronavirus pandemic has demonstrated that a robust universal health care system and an economic system that works for the benefit of all people, rather than a select few, leads to a better society.