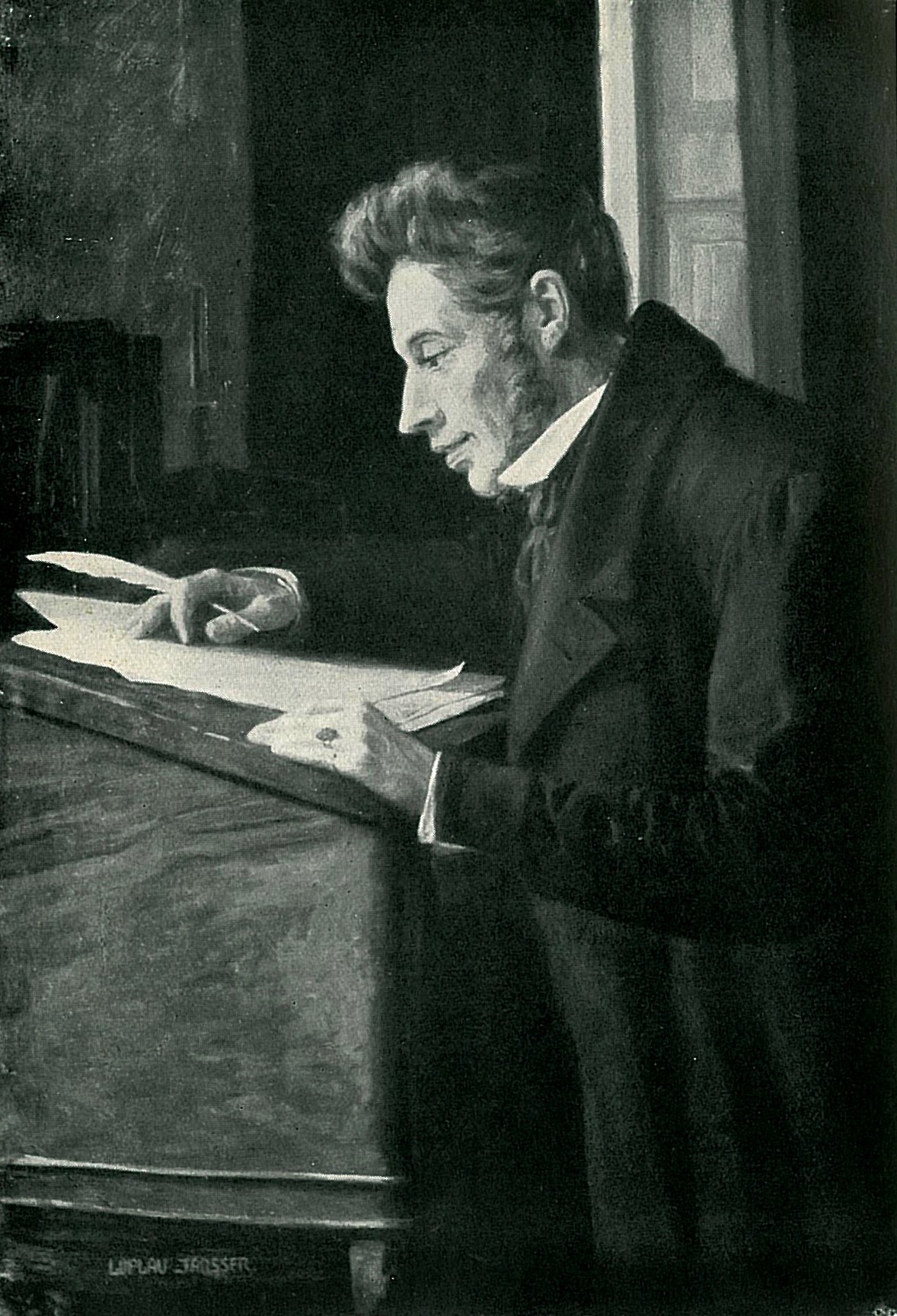 Danish philosopher, Søren Kierkegaard (The proper Danish pronunciation of his name is “sorn KEER-ke-go.”) rebelled against the dominant view that people are nothing more than a part of a historical process. Kierkegaard chose to reject much of what his society taught him, especially the Hegelian system. Hegelianism taught that humans are nothing more than a part of a historical process — an idea adopted by Karl Marx. That assumption rankled Kierkegaard. It went against every fiber of his being. The question of being — who he was and who he should be — was central to Kierkegaard’s life, and by extension, to his expression of what philosophy should be. Unlike most philosophers, he tried to reach nonacademic people and encourage them to to reflect on who they are and change their way of being.

We Are Beings Who Must Choose and Act

Primary to Kierkegaard’s philosophy is the place of the individual. Kierkegaard saw some value in Hegel’s philosophy, but he brought Hegel’s philosophy of progress in consciousness from the level of nations down to the level of the individual. We do inherit the value system of the society into which we are born, but unlike the Hegelians, Kierkegaard said we are free to choose whether to accept this system or not. What’s more, we are free to make our own moral choices all the time. We do not have to conform to what we are told. This is a very important issue for Kierkegaard because our decisions shape who we are.

Kierkegaard saw human beings as alienated from their own nature. He came to this conclusion around the time, the 1840s, that Marx was coming to a similar conclusion about human alienation. Also like Marx, Kierkegaard saw the purpose of philosophy in general, and his life purpose in particular, to be to change the world for the better. After that, the similarity between Kierkegaard and Marx ends. Marx saw economics as the driving force of history and to a large extent denied human free will. Kierkegaard saw human choices as the driving force of history and stressed above all the vital importance of our free will. Marx said capitalism is the cause of our alienation; Kierkegaard said we are the cause of our alienation.

Beingness. Existence. We exist. Obviously, you say? Maybe. Kierkegaard would reply that your existence is so obvious that you never think about it or the implications of it. Existence means you have the freedom to choose who you are, and this means having a life of commitment. Most people usually ignore questions about the meaning of their lives and prefer to escape into some kind of anonymous routine. Today, people blame television, the Internet, and video games, but people have always found various meaningless tasks to occupy themselves to avoid dealing with the questions of who they are and what their lives mean. People — including you, yes, you — prefer meaningless routine and immersing themselves in the objective environment around them that we call society. You — yes, you — do this to avoid your own subjectivity and freedom and the need to commit to them. Everyone does this, Kierkegaard says. This goes way back, he says, and only a few brave souls fight against it. In On the Concept of Irony, he argued that Socrates used irony to force people to abandon their pat answers to Socrates’ annoying questions. They had to begin to think for themselves and to take individual responsibility for their claims about knowledge and value.

Hegel had placed individual human minds within the absolute mind of Geist. In the Hegelian system, we can and should actively engage in reasoning about philosophical questions, but the goal of our critical reflection is to understand the mind of Geist, which is the logical structure of the universe. Kierkegaard rejected this totalizing narrative that through logic we can understand the cosmic mind and everything in it. He saw it as hubris. He understood the limits of human knowledge and felt it our duty to accept the reality that there are things that we cannot understand. And, as is always present in Kierkegaard, he wants the emphasis to be always on the individual, something he noted was sorely lacking in Hegelianism.

Kierkegaard dismissed Hegelianism as being futile and irrelevant to the concrete real-life issues that all individuals must face. For Kierkegaard, philosophy was about life and how to live it. One analogy he uses is that seeking life guidance from Hegelianism is like traveling in Denmark with a tiny map of Europe that shows Denmark only as a dot. In other words, it’s impossible. No abstract system, no matter how logical, can address the concrete features of my life. Only I can do that.

In following the traditions and systems of the world, we are avoiding the reality that we humans are beings who must choose and act. Our day-to-day lives are filled with dilemmas that require us to make decisions. Some of these dilemmas are relatively insignificant — what will I have for dinner tonight? Others are life changing. We agonize over these decisions, worried we will make the wrong choice. Kierkegaard wrote in his book Either/Or (1843) that if you marry, you will regret it; if you do not marry, you will also regret it. What he means is that we are always capable of seeing the negatives of any choice we make. The point is that we should not reduce our lives to a series of binary choices because life is more dynamic than that. Part of that dynamic is that we will always be aware that we could have made different choices. We could have lived our lives differently.

It is really true what philosophy tells us, that life must be understood backwards. But with this, one forgets the second proposition, that it must be lived forwards. A proposition which, the more it is subjected to careful thought, the more it ends up concluding precisely that life at any given moment cannot really ever be fully understood; exactly because there is no single moment where time stops completely in order for me to take position [to do this]: going backwards. (Journalen JJ:167, volume 18, page 306.)

Throughout history, philosophers believed that the primary problem of epistemology was how to rise above individual subjectivity to acquire objective truth. Kierkegaard completely reverses this. For him, the primary task in our life is how to become more aware of our own subjective life. He proposed the radical notion that our natural tendency is to hide within the cover of objectivity. We do this, he says, to avoid the difficult crisis of making our own decisions. He makes the stark distinction between following the crowd and being self-directed. We can come to truth only when we arrive at it through our own experiences and decisions.

Kierkegaard declared that truth is subjectivity. He does not deny the possibility of objective truth, but any objective facts are truth only when they are taken in and owned by an individual. The word “subjective” has two meanings. Most philosophers, and people, focus on the bad kind of subjectivity when personal interests corrupt one’s ability to perceive and judge matters correctly. In many matters, for example, grading students’ assignments, we want people to make objective decisions rather than biased ones. We often associate “objective” with “fair” and “subjective” with “unfair.”

The word “subjective” also means “related to a subject,” and philosophers often use the word “subject” to refer to a human as a being who perceives and acts. This is how Kierkegaard uses “subjectivity” — related to a subject, or person. An objective fact becomes truth when it becomes related to a person by that person’s decisions and actions. The statement “2 + 2 = 4” is an objective fact, but you can be forgiven for saying, “yeah, so?” The statement “someone got an F in the philosophy class” may be another objective fact, but it would be a very different fact if the statement was “you got an F in the philosophy class.” The difference is whether a fact is related to you in a manner that means something to you. Facts such as “2 + 2 = 4” and “České Budějovice is the administrative seat of the South Bohemian region of the Czech Republic” probably have little direct relation to you, so they don’t mean much to you.

When facts do relate to you and you care about them, they become subjective facts and a part of your conscious being. Consider the difference between hearing someone say “I love you” to someone else and hearing someone say “I love you” to you. These are different facts and different experiences. Consider also the difference between understanding that cheating is wrong and actually deciding “I will not cheat.” Someone can objectively know a moral truth but not be subjectively living in that truth. However, someone could be without a grand rational moral theory but still have empathy for others. A large part of Kierkegaard’s philosophy was his shift away from philosophy’s focus on objective rationality to focus instead on the importance of individuals living their beliefs.