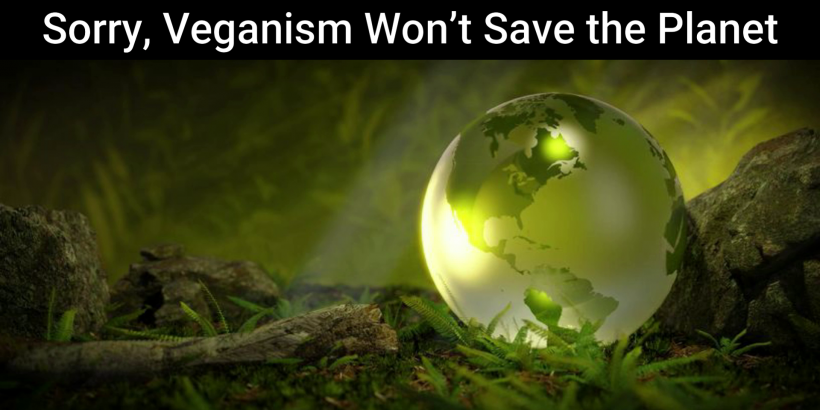 Too Lazy; Didn’t Read (TL;DR): Veganism won’t save the planet because it attacks the wrong targets.

I recently saw someone describe herself as a “vegan evangelist.” Strange though that label may sound, it appropriately describes the religious fervor of veganism. She said, as do some others, that she was on a mission to “save the planet” and wants to convert people to veganism.

To “go vegan” is a legitimate dietary choice, but I am about to become a heretic in the vegan evangelists’ eyes, because I will dare to question the vegan dogma. There are multiple fallacies in the vegan ideology but for brevity, in this article, I will concentrate on the “veganism will save the planet” claim. It’s about the climate crisis.

The Earth’s climate is changing, and we humans are causing it. We need to change our way of life before we extinguish the planet’s ecosystem and us with it.

The vegan evangelists claim that growing meat is a leading, and some claim the primary,  cause of climate change. Declaring that we all need to go vegan to save the planet has the appeal of a simple solution. But it is ultimately a false hope that distracts us from real solutions.

A leading cause of climate change is greenhouse gas (carbon) emissions—carbon dioxide, methane, and the like. Vegan evangelists blame animal agriculture for this. Their accusations run from the absurd (cow belches and farts) to the insightful objection to how we are using the land to grow food.

Land use is a very important issue. What are the most efficient ways to use land to grow food? By efficient, I don’t mean a corporatist calculation of how to extract the most profits per hectare from agricultural land. I mean how we can grow enough food to feed people without harming the environment through spreading toxins and excess carbon emissions.


The vegan evangelists’ mistake is dogmatically clinging to their simple solution and not looking at all of the evidence. Cherry picking data and confirmation bias are very common, and in no way unique to vegans. Vegan evangelists are responsible for believing false narratives that attack the wrong targets.

Dr. Sarah Taber, a scientist specializing in food production, schooled a vegan evangelist in this highly informative Twitter lecture. Do please read that thread; I won’t repeat Dr. Taber’s many excellent, factual points debunking veganism’s false narratives about land use. The vegan’s only response was to block Dr. Taber and the facts she presented—the type of response common to zealots. Can’t deal with the facts? Then block people telling them and run away to hide in your silo.

The facts are that human behavior is causing climate change and we have created a climate crisis, but eating meat is not causing it and veganism will not stop it. Veganism is the wrong solution that tries to make an overly simple ideology a panacea.

If you want to save the planet you need to a LOT more than give up hamburgers. You have to change not only your diet but all of society. Giving up meat has little effect in stopping climate change if everything else in the modern world continues.

Your plant-based diet won’t help the planet if those plants are:

The inconvenient truth is that our patriarchal, corporatist socio-economic system is destroying the planet. Eating meat did not create that system (if you want a single cause to blame, look into the history of wheat cultivation). Veganism does not address much less solve the underlying problem.

Concerning excess greenhouse gasses, the issue is not cattle farting, it’s actions like taking fruit from the tropics and flying them to other continents. It’s a vegan driving an SUV to a specialty vegan store. It’s the single-use plastics that serve the vegan bubble teas and package the vegan fake meat products.

If the vegan evangelist says, “but I cut down on my use of single-use plastics, and I drive an electric car, and I recycle,” I say, that’s good. Seriously, kudos. But guess what? A meat-eater can do all of those acts too, and in fact, many do.

I completely agree with vegan evangelists when they argue that the methods used by agriculture to grow meat is overly wasteful and harms the environment. Here’s the reality beneath the rhetoric: Meat is NOT the problem; it is the way meat is grown that is the problem.


Here’s an analogy to explain it. Trees produce wood, right? To make wood products, we need to cut down trees. Indiscriminate clear-cutting of forests harms the environment, but trees can be sustainably grown and harvested. Trees are the epitome of a renewable resource if we work with nature. The patriarchal, corporatist mindset of bringing the big trucks into the forest, cutting down all the trees, and hauling it away, harms the planet. The mindset that the forest is there to be exploited for profit is the culprit.

The agricultural equivalent of indiscriminate clear-cutting of forests is factory farming. The patriarchal, corporatist mindset that land is there to be exploited for profit regardless of the consequences is the chief culprit causing climate change. Factory farming focuses on economies of scale. The corporate push for economic efficiency leads to the use of monoculture, herbicides and pesticides, artificial fertilizers, and fossil fuel-burning machinery.

Especially in the last fifty years, factory farming corporations have created enormous farms in selected areas, dominating land and water supplies, and forcing the food system to rely on transporting food hundreds, even thousands, of kilometers from the factory farms to the consumers. Nearly 70% of U.S. total fruit and vegetable production comes from California (only 4% of it grown organically) and has to be transported around the country. That’s factory farming of fruits and vegetables, not meat, with all of the related harms caused by fossil-fuel burning transport vehicles.

Here’s the thing. Factory farming is used to grow all food, not just meat. Whether it’s pigs or corn, if you use toxic chemicals and fossil fuels to grow them, you are harming the planet with poisons, waste, and greenhouse gas pollution. The issue is the processes that are used to produce foods not the foods themselves.

Can we grow plant-based foods without harming the environment? Yes, and we should.

Can we grow meat-based foods without harming the environment? Yes, and we should.

Vegan evangelists can hate on these small meat-growing farmers all they like, but the bottom line is that factory farming is the culprit and if we remove factory farming of food, we save the planet. We do not need to reduce our dairy and meat intake; we need to buy local rather than importing our food from far-away factory farms. No veganism required.

Should some people eat more fruit and veg? Yes. Does that mean meat should be forbidden for everyone? Of course not.

In short, if you want to save the planet, buy local. Local farmers can produce meat and other animal products ethically and sustainably. Your factory-farmed vegetables, your avocados and other tropical “superfoods” flown in for your privileged consumption are far more harmful to the planet than Farmer Jones’s organic beef and cheese grown a few kilometers from you.

So, stop attacking the wrong targets.