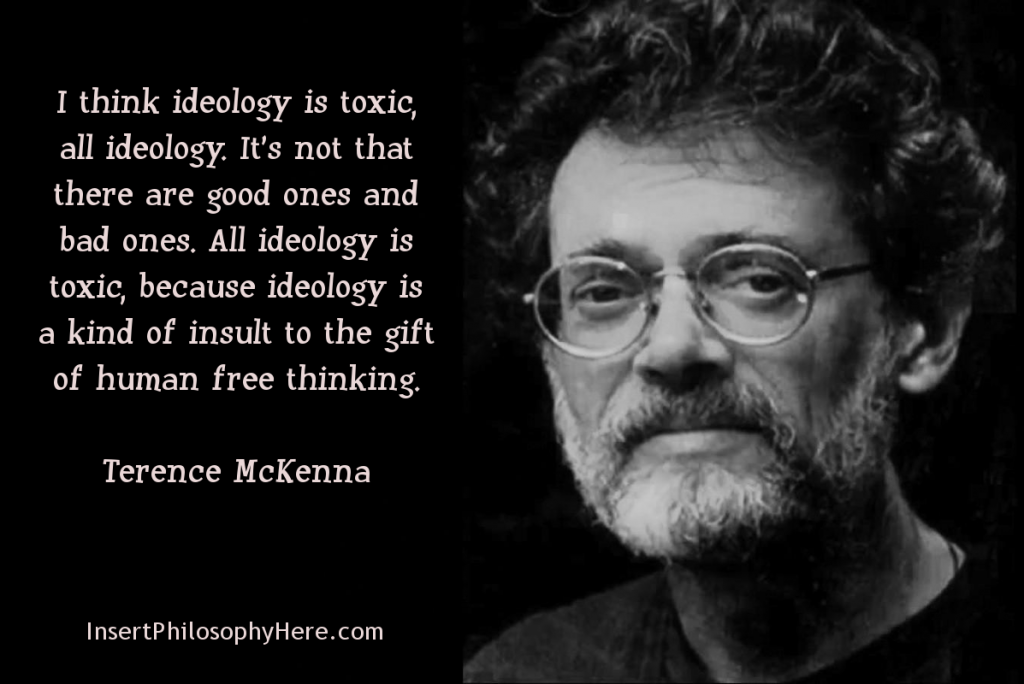 Better known for his experiments and lectures on the value of hallucinogenics in expanding consciousness, McKenna also had more than a few things to say about philosophy. McKenna, in this quote about ideology, keeps with his theme of the importance of keeping your mind open. McKenna wasn’t a true conspiracy theorist, but he had a strong healthy skepticism about what the rich and powerful had to say. They act in their interests, not ours. Blindly following what the rich and powerful communicate to us will lead us astray.

Karl Marx explained how the power structure used ideologies to misinform and mislead people into serving the interests of the rich and powerful. McKenna was no Marxist, but McKenna heartily agreed with Marx’s idea that the propaganda products of the powerful, culture and ideology, are not your friends. By “culture,” McKenna means not the fine arts, but the mass media: television, radio, newspapers, music, movies, and now, the Internet. The powers-that-be use mass media to create culture and impose their interests on us. That is what an ideology is: a system of values and beliefs disseminated as normative and obligatory. Karl Marx was mistaken in thinking that ideologies came from only the economic substructure. Terence McKenna on ideology is correct that ideology is a way of thinking that anyone can fall into and there are many types of ideologies not just the one buttressing capitalism.

“There is no authority but yourself,” McKenna said. This doesn’t mean that you never listen to others, but it does mean that you need to make your own decisions about what is right or wrong, truth or fiction. Above all, McKenna’s message is to explore the many spheres of reality, and you can’t do that if your consciousness has been closed down by ideology. Ideology is the opposite of free thinking.

Archiving Terence McKenna – Mostly a fan site of worshipful artwork but does have a good bibliography of physical and digital resources about McKenna.