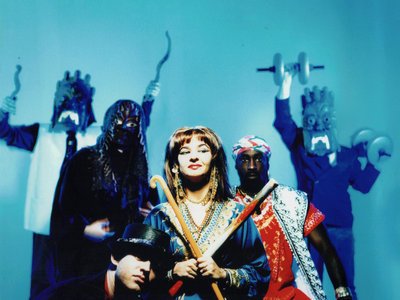 One revolution in music happened in England in the 1990s — the Asian Underground, partly captured in the documentaries Pardesi and Buy More Incense. The young rebel artists of the Asian Underground created a new cultural scene and a new genre of music that spread across the globe, affecting many people including yours truly.

At the center of that revolution was Nation Records. Started in 1988 by Kath Canoville and Aki Nawaz, it offered vibrant, meaningful music at a time when the music world was drowning in bubblegum pop pabulum. Nation Records helped launch the careers of Loop Guru, Transglobal Underground, Natacha Atlas, and more. More importantly, Nation Records gave marginalized voices in England an outlet for musical expression.

The whole of Nation music catalog is now available on one online platform: https://nationrecords.bandcamp.com/artists It is all listenable free and then can be supported by purchasing–and yes, you SHOULD support the artists by buying their music. Some of this music has been out-of-print for years and very difficult to find; I know as a DJ trying to get copies of this stuff. But now the music is back and available for your listening pleasure. The most important aspect of the new online platform is to give a new lease of life to this amazing music. This music is not only historically important for its time and place, it is quality music that is as fresh today as it was when it was created.

There truly is some great work there, that just got missed and tragically forgotten during what was, as Aki Nawaz puts it, a chaotic time of beginning a “movement” not just the “Asian Underground” but also the “anarchic global scene.” The artists of Nation Records gave new life, meaning, and influence to Indian and African music, helping create the world fusion genre. Treat yourself by discovering some new/old music.