The Forgotten Brilliance of Henri Bergson
Skip to content 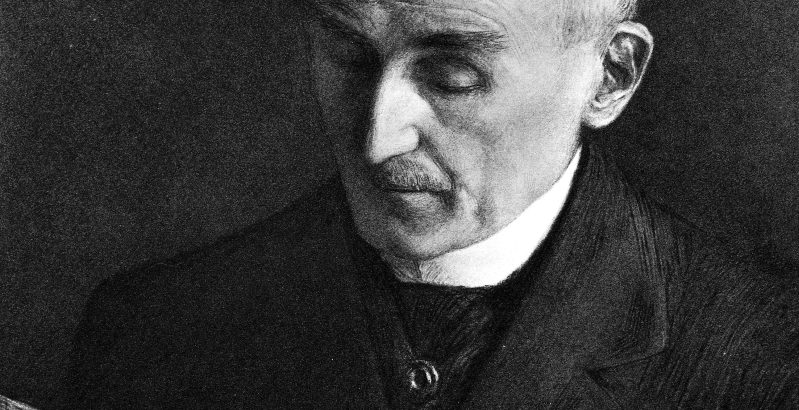 For several decades, French philosopher Henri Bergson (1856–1941) was probably the most famous philosopher in the world. He is now tragically largely forgotten because his work is incorrectly dismissed as mere speculation because it is not reducible to the methods of analytical philosophy. Bergson, similar to G.W.F. Hegel, thought of knowledge as an ongoing process of development, but he rejected the mechanistic causality of Hegel’s historicism. Bergson developed a highly original approach to philosophy that took into account elements of Kant, Hegel, and pragmatism.

The method of analysis is how science and analytical philosophy think empirical knowledge of the world is obtained, and it is the habitual way that Western people have learned to think. Since Aristotle, philosophy had seen everything in the universe as discrete substances that maintain their identity even while undergoing change. When you look back at all of the philosophers we’ve covered so far, you can see how much of their work was dealing with the problems created by that assumption that everything is a substance: how objects are, how they are similar yet different, how they change, and how we can have knowledge about them. Analysis is the method that comes from this assumption. It is the detached and disinterested method of separating the object from its surroundings, conceptually breaking down an object into parts, interpreting the divided parts, and reconstituting a view of the object after analysis. But, Bergson says, analysis depends on symbols that represent parts of the objects and then uses symbols to reconstruct a picture of the object. This is similar to Locke’s epistemology in which simple ideas combine into complex ideas, but this is the approach that Bergson wants us to stop using. Symbols, words, and language are, he said, barriers between us and reality. Bergson’s philosophy is not an epistemology in the usual sense.

Bergson says that the true empiricism is intuition. Bergson uses “intuition” differently than we’ve seen previously. Philosophers like Descartes used “intuition” to describe an immediate knowing. Bergson used “intuition” as a sympathetic entering into what is observed, rather than going around it from the outside. By “sympathetic,” Bergson does not mean an emotion but operating through affinity and interdependence, as in a sympathetic vibration of two strings. Intuition is entering into experience to be a part of what is observed. Intuition is an integral experience, a series of acts within what Bergson calls “duration,” (explained soon) and thus a method of experience.

One of the examples Bergson gives of the difference between the method of analysis and the method of intuition is experiencing a city. Looking at photographs of a city, even a collection taken from every viewpoint and perspective, you can’t reconstruct what it is to be in the city. Only by entering the city and walking through it can you grasp what it is to be there. His other example is reading a commentary on a poem by Homer. No matter how many commentaries you read, you can never grasp the value of experiencing the poem in its original language. Analysis can give us photographs and commentary, but it can’t give us the experience of the things themselves. Analysis has its own value and provides us with some understanding, but knowing the things themselves requires the sympathetic entering into of intuition. Bergson says that by intuition we can seize reality from within.

Intuition begins with entering into the “duration,” another original concept from Bergson. Duration is Bergson’s conception of time and consciousness that he proposed to help correct the problems with the method of analysis. Bergson realized that reality is a continuous flow of activity, not static substances. Everything is constantly changing, and fundamental to the flow of reality is time. We experience time, he realized, but not with our senses or by reason, but through an inner sense. Bergson’s philosophy of time is an ingenious and highly original exploration of a topic that few philosophers take on.

Bergson identifies two ways that we can think about time. One he calls “scientific time” or “clock time.” This is time as conceived by the method of analysis, discussed earlier. The other is “duration” or “real time.” This is time as we live it. Science attempts to measure time with precision, but science’s concept of time is actually an abstraction based on the concept of space.

Bergson’s first book on duration was Time and Free Will: An Essay on the Immediate Data of Consciousness (1889). As the subtitle indicates, Bergson is studying the contents of consciousness, similar to Husserl’s project of phenomenology. Bergson accepted the reality of free will and said that other philosophers only saw free will as a philosophical problem because of their detached and disinterested method of analysis. Kant had to locate free will outside of time and space because he confused all time with immobile space that is subject to causality. Bergson differentiated time and space, removing time from mechanistic spatial causality and placed it within duration. Free will is also located within duration.

So what is duration? Our language isn’t fully adequate to define it, but Bergson gives some analogies. Bergson visualizes duration as being like two spools. The first spool is constantly unrolling as time flows forward, and the second spool is rolling up, continually collecting memories left by the other spool. The second spool is consciousness, symbolizing how we take up duration and gather experiences in it. Each moment in consciousness is different from all previous moments because the present is added onto the memories of the past.

His next analogy is how we experience time like we experience the color orange, which also illustrates how duration is connected with intuition. If we sympathize with, enter into, orange, we would sense ourselves between red and yellow. Making the effort to perceive orange, we perceive a variety of shades of orange between red and yellow. Further effort opens us up to perceiving lighter and darker shades of each color and the whole spectrum of colors and saturation. Similarly, we can be introspective and sympathize with and enter into our own duration. When we do, we can sense ourselves among many other durations. Making an effort, we can expand our intuition to come into contact with a community of durations of different shades and saturations. We can follow durations upwardly toward spirit and downwardly toward inert matter — indeed, in a manner similar to that of Plotinus.

Reality is more like a fluid than a sequence of discrete units, so, for Bergson, duration is not a perception of images as an empiricist would understand it but the entering into a flow. We can, to use a contemporary analogy, “dial up or down” our experience of time. We do this unconsciously, as indicated in the old saying, “Time flies when you’re having fun.” Also, you know how time can drag when you have to wait for an unpleasant experience to finish, like listening to a dull professor lecture. Not a philosophy lecture of course, philosophy is riveting! (Just seeing if you are still paying attention.) Time is a flowing indivisible continuum. Clock time is an artificial abstraction created by humans. We can and do divide time into distinct, measurable entities: hours, minutes, seconds. These divisions are useful, but an hour does not in itself exist. Bergson says units of time become harmful to us when we mistake them for reality.

When we don’t treat objects as substances and don’t treat time as a sequence of discrete units, we open ourselves to see how reality truly is. When we understand that process, spontaneity, and creativity are fundamental to reality, we can understand order and stability in objects as patterns within the flux of the dynamic flow.

This reality is mobility. Not things made, but things in the making, not self-maintaining states but only changing states, exist. Rest is never more than apparent, or, rather, relative. The consciousness we have of our own self in its continual flux introduces us to the interior of a reality, on the model of which we must represent other realities. All reality, therefore, is tendency. (An Introduction to Metaphysics, 65)

This idea that reality is mobility and tendency, a process, is incredibly influential in continental philosophy and all of the sciences and humanities that take inspiration from it. Bergson’s process philosophy finds resonance in quantum physics and chaos theory, among other branches of the hard sciences.

Through intuition and duration, we see that we aren’t dealing with substances. The question, “What will the weather be tomorrow?” is not inquiring about a substance. A friendship, a vacation, a university, an ecosystem, and public opinion are all concepts we can think about and use meaningfully in sentences, but they aren’t things or substances. Such concepts are expressions of collections of more primary activities and events. Rain is not a quality of a substance called weather; rain happens in the course of weather as a result of the interplay of various forces and objects. Weather is a dynamic process, ever changing as one set of events gives way to a new set of events. There are recurring patterns (it rains more in the autumn than in the summer, perhaps), but not permanent qualities.

The core of Bergson’s philosophy is that we will better understand objects when we consider them as dynamic processes, like weather, rather than as substances. Objects find their identity within a set of relations and events. A friendship does not have a static character, no matter how strong it is; it has its ups and downs, its ebbs and flows. Public opinion is ever changing within shifting demographics. An ecosystem is a community of living organisms interacting and flowing as a system with no exact boundaries. You might think that a university has a static geographical location, but is a university a set of GPS coordinates? Would it cease to be if it moved location? Or if it changed its name? What universities are, and most of what we experience and think about, are entities not reducible to substances.

With reality being a dynamic process of change, we do well to make the effort to put aside the habitual method of analysis and enter into the process of reality, allowing our mind’s categories to be shaped by reality. Entering into the duration, we can expand our awareness to experience that each duration that comes into existence must be related to others.

Few remember Henri Bergson’s name today, but the influence of his philosophy has rippled throughout society. In a number of ways, he was ahead of his time, and we can see many of his themes echoed in current continental philosophy and popular culture. Those who practice the method of analysis — many scientists and, of course, analytical philosophers — have dismissed Bergson as an irrational antiscience mystic. But Bergson was not antiscience. He cautioned against the reductionist method of doing science that reduced reality to static discrete entities. He pointed out that infinitesimal calculus, now central to physics, is based on the realization of continuity and change over the earlier static conception of the world. A number of theories in physics, increasingly being accepted now, consider the universe to be dynamic in the way Bergson described. It remains to be seen, but a revival of interest in Bergson may soon happen, just as some other past philosophers have found renewed fame and discussion long after they formed their ideas.