The Memeocene: Memes and Humanity's New Epoch
Skip to content

Behold The Memeocene. Dialogue and politics are dead and we killed them.

As human population and technology grows, there is increasing talk that we have entered a new epoch—the anthropocene or epoch of humans. The idea behind the appellation is that the Earth–its biology and geology–is being altered by human activity. There is merit to such an idea. True, humans are altering the planet geologically and ecologically, but humanity itself is being altered by another factor, and there should be a name for this new epoch of humanity: the Memeocene.

In the 16th century, the printing press revolutionized how humans communicated. In the 1920s, radio did the same, followed by television in the 1950s. Innovations in technology are usually associated with improvements in human society. It was understandably assumed that the development of the Internet around the turn of the 21st century would usher in a new era of human communication and progress.

Instead, despite the best intentions, the Internet ushered in the Memeocene (pronounced MĒM-oh-sēn): the epoch of memes. Whereas the printing press, radio, and television increased the intellectual depth and density of human communication, memes abridge and dumb down human communication. The word “meme” itself is an example—created by someone who self-interestedly wanted to reduce a set of complex phenomena into a simplistic and fungible word. Deeply ironic that said self-interested person chose to adulterate the Greek word for “to imitate” to create “meme.” Simplistic imitation characterizes the Memeocene.

As I have remarked elsewhere, the Internet has the tremendous potential to help anyone learn anything. Instead, people devote their time and energy to create memes, either editing graphics or making up catchphrases to post on social media.

Historians will debate it for decades to come, but the evidence suggests that the Memeocene started innocently enough on 23 December, 2006 with two photos of an elephant seal (not a walrus) named Minazo. (NB – Yes, I know about 4chan’s Caturday beginning in 2005 which arguably is the precursor to the Minazo meme, but it was that elephant seal meme that took the idea out of the shadows and into the mainstream.)

Somehow the apparent existential crisis of a sea mammal captured people’s interest. Imitations came fast and furious. The trope of an animal photo captioned with grammatically poor quotes exploded across the Internet. The most full-throated expression of the new craze was the Web site “I Can Has Cheeseburger,” perhaps the ultimate “right place-right time” story. Two friends created the Web site in January 2007 to capitalize on the new Internet meme craze, They cashed out eight months later, selling the site for $2 million. Memes became a new gold rush. Everyone wanted a piece of the action.

Skip ahead a dozen years, the Memeocene has taken over all of social media, most of the rest of the Internet, and has tentacled into everyday life beyond the online world. Memes for fun and profit became a major form of human interaction. We are the worse off for it.

No Meme Can Show the Harmful Effects of the Memeocene

Because reality does not work that way. Memes are, by design, a simplistic adulteration of what is real. They are not real. You can’t solve problems like the climate crisis or institutional racism by taking a photo and adding the text “I has a sad.”

The real trouble with memes is not that they can’t solve problems. The real trouble is that memes are a way to avoid dealing with problems. Heck, memes are a way to avoid dealing with life, in particularly, other people. The most popular way in the Memeocene to dismiss the voices and rights of others is to create a meme mocking them. Social media and political Web site have become deserts devoid of meaningful conversation. Instead of engaging issues and discussing ways to improve the world, Homo Memeocene creates memes to mock perceived adversaries.

Political dialogue is dead, replaced by posting memes. People gather in the online silos of their political inclination and post for each other memes they have seen that mock and ridicule others. New ways to say “___ are stupid” are de rigueur. Usually, telling apart anti-Republican and anti-Democratic memes requires careful study. Try searching for images on “Obama is stupid” and “Trump is stupid” and you will receive nearly identical sets of memes.

Political memes are probably a symptom of a broken political culture. People took the idea of combining a graphic with a grammatically poor quote and used it to express their political prejudices. It is easier than reading, listening, thinking, and working together toward solutions.

Memes can also be a convenient shorthand for expressions of hatred of all sorts. A recurring meme component is Pepe the Frog, an ugly caricature adulterated by ugly people to express their ugly bigotry. Bigoted caricatures of others is an old practice, but the technology of the Memeocene makes it easier for any bigot to do. The speed and reach of the online world makes it quick and easy to spread bigotry through memes.

But Aren’t Some Memes Just Fun? 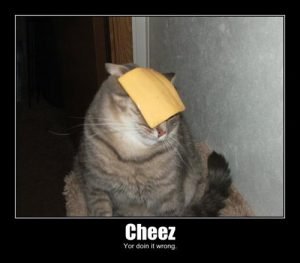 Sure. Memes started as jokes. Many of them are funny. Many of them are harmless even if they aren’t that funny. But like anything else, too much of even a good thing has damaging effects. Memes as a momentary diversion are fun, but just like you wouldn’t spend hours at work watching cat videos, memes are not a substitute for genuine human interaction.

I mean, yeah, a cat with a slice of cheese on its head is funny. But you can’t hang out there.

And yet, people do. For example, the social media site, Reddit, has over 100 Subreddits specifically devoted to memes and hundreds if not thousands more Subreddits where memes are the primary form of post. On Reddit, people can link to full meaningful content elsewhere on the Web, which was the original intention of the site whose name comes from “I read it.” Some people do. But the most popular posts are always memes. In the Memeocene, even sites dedicated to content are overwhelmed by memes.

The Descent of Humanity?

The exact effects of memes have yet to be determined, but it is affecting human society by crowding out other communication. Humanity is getting meaner and more ignorant and memes are a main vehicle for this devolution back into barbarism. Memes are probably a symptom of a larger trend of the dumbing down of communication and the shorter attention span of humanity. Still, memes are contributing to the decrease in the intellectual density and depth of human dialogue.

The Memeocene is the age of anti-information and anti-dialogue. Memes require little intellectual effort or rigor. They are lazy imitation of mindless tropes. Memes are used to shut off communication and close off contact with others. It is easier for lazy people to respond to an idea by posting a meme than to answer the idea with a reasoned rebuttal. Don’t answer the argument, just say “stupid liberal/conservative” and post a meme mocking them. Interaction over.

We have seen the devolution of Homo Sapiens, the person of wisdom, to Homo Memeocene, the person of psittacism. Some say we are in an era of post-truth. Lies and propaganda have always been with us. What has changed is not the presence of lies from those in power, but the eagerness of Homo Memeocene to parrot memes rather than deal with reality. The Memeocene is the era of post-caring about truth.

“But memes are just jokes,” some would reply. But that’s the point: people are more interested in jokes than seriousness. People spend time and effort on creating and disseminating memes instead of spending time and effort on making their communities and the larger society a better place to live. We can’t afford to have a humorless existence, but we also cannot afford to have a substanceless existence.

Worse still, the corporate media has increasingly taken to  report on memes rather than on actual events. Take the recent “Storm Area 51” meme—a non-event covered as though it was a real event, where articles like this one are created to talk about the meme and the derivative memes. These same corporate media outlets say little to nothing about real efforts by real people to deal with real issues. That’s boring. Instead, the corporate media—online, print, and television—give exposure to memes, encouraging people to try to spend even more time and energy to create memes in the hopes their meme will “go viral.”

Scholars, leaders, and journalists wonder aloud why we have so many problems in the world. They wonder why people aren’t more involved in society and politics and why people are so detached and cynical. They don’t realize the age we live in: the Memeocene Epoch. It is an age in which society recognizes simplistic imitation more than substance. This cannot possibly have positive effects.

Addendum, June 2020: One has to wonder how much the proliferation of memes is affecting the seriousness of the response to the Covid-19 pandemic. In the Memocene, nearly everything online is unreal and a joke, How many people are treating the pandemic as just another thing to laugh at and swipe to the next vacuous post on social media? Sadly, we will soon find out.