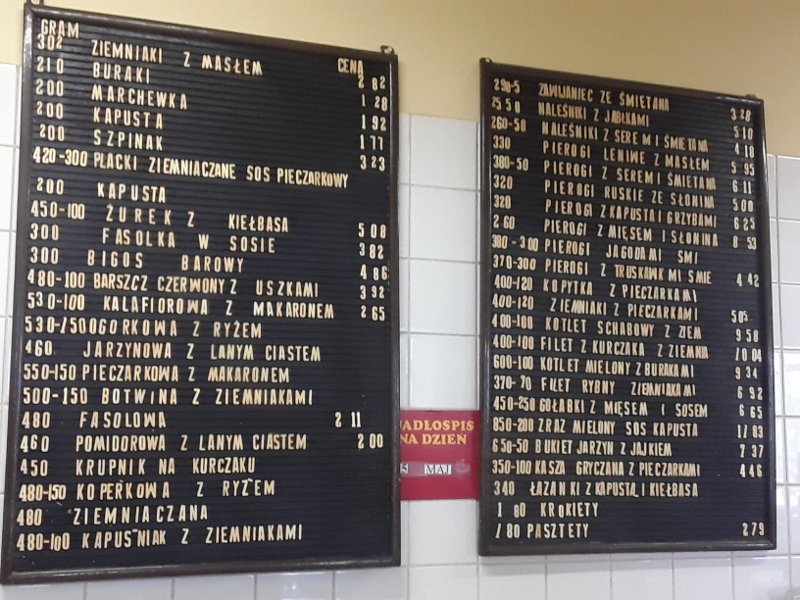 When in Poland, try Polish food and at least once in your life take advantage of the milk bar experience. “Advantage” might not be everyone’s word for the experience, but it is an experience. 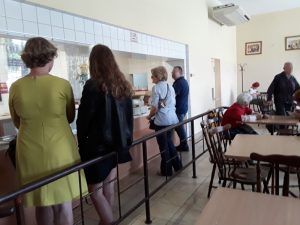 The “bar mleczny” (bar mlech-nah) or “milk bar” is a traditional Polish restaurant style. For many, the bar mleczny will conjure up memories of their grade school cafeteria and with good reason. The Polish milk bar is as basic as a restaurant can get. There is little to no attempt to make the place beautiful or comfortable. Tables and chairs are spartan. You stand in line before reaching the counter of bins of food. Behind the counter are the matrons, every inch the stereotype of the school lunch ladies. In back you can see some of them laboring over huge vats of boiling food. You select your items, which are quickly but unceremoniously given to you. You pay, find a seat, eat your basic food, bus your dishes, and leave. No, you do not linger. 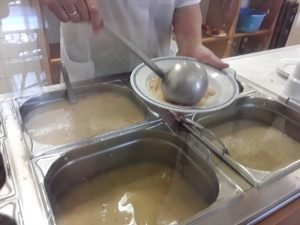 For some, the Polish milk bar will evoke every stereotype of the Soviet-era. This is understandable, but the bar mleczny was a staple of Polish culture long before the Soviets invaded and occupied Poland. The first bar mleczny was established in 1896 by Stanisław Dłużewski, who wanted an outlet to sell the products from his large dairy farm. His milk bar sold milk and egg-based meals for a reasonable price and was a quick success. It did not serve alcohol. The bar mleczny formula spread across Poland, becoming popular during the difficult times of World War I and the Great Depression. A worker’s wages often included the price of meals at a bar mleczny. When the Soviets took over and imposed their form of fascism, the milk bars were a lifeline where people could get affordable food. The Soviets took over ownership of the milk bars but did not change them otherwise. The milk bar experience fit with the Soviet ideal of bland simplicity.

Some of the milk bars still exist in Krakow and Warsaw. I recently stayed in Nova Huta, the 1950s planned city that is now part of Krakow. Two blocks from the apartment was Szkolny Bar Mleczny where I took the photos in this article. Szkolny serves the three main Polish food groups: soup, pierogi, and anything that can be pickled. We picked piergoi and pickled salad (pictured below). It was not fancy. It was not exceptionally tasty. But it was palatable and filling. The meal fed two people for under $5. 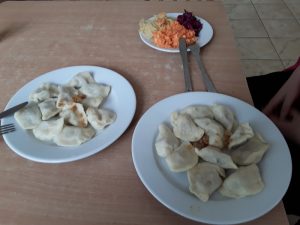 We did linger to soak in the experience and watch the people (which is always the most interesting part of traveling). During the hour we were there, the Szkolny Bar Mleczny served a steady stream of customers. Some were workers on their lunch break, but most were senior citizens. They stood in line silently, resignedly. We couldn’t help but wonder if they had been coming here for lunch for decades, maybe every day. They selected their items (almost all had soup, some added pickled salad), ate their food silently, bused their dishes and left. But they were well fed.

It was a glimpse into another way of life.