The Political Spectrum - Part 2: The Fake Axis
Skip to content 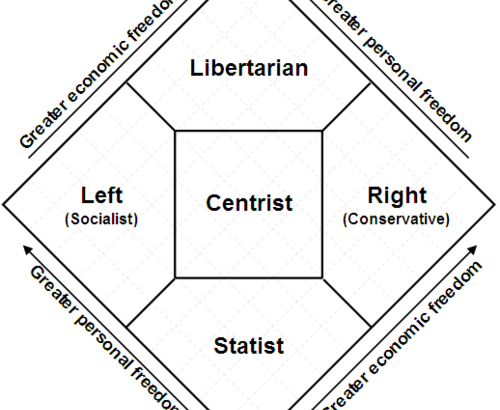 Part 2 in my series on rethinking the political spectrum.

Part 3: The Fake Left and the Reactionary Right

Part 4: What Is Conservatism?

Part 5: What Is Liberalism?

The traditional conception of the political spectrum has been confusing. Some have tried to exploit that confusion to push their own agendas, such as the dual axis political spectrum suggested by political libertarianism. This marketing fake has fooled some people, and it needs to be debunked.

The dual axis attempts to replace the traditional political spectrum by portraying political psychology along an XY chart. One axis stands for left-right and the other reflecting some other sentiment, most commonly labeled as “authoritarian-democratic” or “authoritarian-libertarian.”

My strong tendency as a philosopher is to acknowledge that issues are more multidimensional than currently viewed. The dual-axis chart, however, obfuscates the discussion of political orientation by creating a false dimension. It was invented in 1969 by libertarian activist David Nolan as a marketing ploy to sell libertarian ideology.

Nolan created a diamond-shaped XY chart with one axis suggesting economic freedom and the other axis suggesting social freedom with political libertarianism at the top as though it was divine grace handed down from heaven. Classic marketing technique to put top and center what you want the observer to prefer. Added are the arrows pointing upward to greater freedom, and who wouldn’t want greater freedom? The dual-axis diamond, or Nolan Chart, has been used by libertarian groups and even libertarian political parties as a recruiting tool.

Stripped of the marketing manipulation, the chart is portrayed as having a standard XY chart with two axes with various labeling: frequently forms of the economic and the personal.

There are multiple problems with the dual-axis chart, the main one being, as mentioned earlier, its creation of a false dimension. As I explained in Part 1, the left-right political spectrum reflects the distribution of power in society. Nolan’s original chart took that grain of truth and oversimplified it into the bromide of “freedom,” Then, he artificially split personal and economic freedom into separate axes to obscure the central truth that the left-right axis is the concentration of versus the circulation of power. The various versions based on Nolan’s original chart are variations on these two oversimplifications.

Dishonest subterfuge infuses all versions of the libertarian dual axis chart. There are three main areas of subterfuge in the dual axis. One is an artificial separation of economic issues from social issues. This is central to Nolan’s original chart and is often copied by followers. It is an attempt to mask the reality that economic power is inextricably intertwined with social power. Whoever has the gold makes the rules, is an old saying, and still true.

Why does the libertarian dual-axis chart try to hide these realities? What are libertarians who use the chart trying to hide?

Where Libertarianism Is on the Political Spectrum

Political libertarians try to push the false dimension in the dual-axis spectrum as an argument prop to differentiate their ideology from more traditional right-wing ideologies. Increasing power concentration is the definition of increasingly right-wing. Again, it does not matter in who or what the power is concentrated. Libertarians ignore this reality and create the subterfuge that they are outside the left-right spectrum and hide that they are, in fact, right-wing. Here is another example.

So then, is there a “Libertarian Left” as the last dual axis chart suggests? The perhaps surprising answer is, “no.” Greater circulation of power increases personal and economic freedom—that is the definition of left-wing. However, a third subterfuge of the libertarian marketing scheme is to pretend that libertarianism itself lies along a left-right spectrum. Not all forms of “liberty” are a greater circulation of freedom. The dictator has the liberty to take away other people’s freedoms. A warlord/gang leader has the liberty to oppress others. These are the narrow liberties to which political libertarianism leads, and its basic assumptions mean it is inherently right-wing in its drive for concentration, not circulation, of “liberty.”

Libertarian ideology rests on the mistake of presuming that governance is violence. This explains why most all versions of the deal axis chart portray government or the state as being a negative to overcome. Nolan’s original chart set that tone of declaring “the state” as the worst and libertarianism as the best. Political libertarianism is an extreme opposition to government to bring about a particular form of power concentration.

A central fallacy of Libertarianism is the assumption that ending the rule of law would lead to utopia rather than a Hobbesian “state of nature.” It is the child’s fantasy of “if there were no rules, I could do whatever I want and I will be happy.” As I asked earlier, who doesn’t want more freedom? But libertarians fundamentally misunderstand the nature of freedom, something I explained in depth in an earlier article. They do not understand that freedom is a dynamic among people, and they focus on the perceived tyrannies of negative freedoms of governance, whether social norms or legal proscriptions. They, therefore, cannot understand that some restrictions on human behavior are necessary to create more freedom. That is not a paradox. That is the nature of freedom in all aspects of life. Eliminating the state will not ultimately lead to more freedom. It would lead only to greater tyranny, as can be easily demonstrated.

By falsely declaring that governance is violence, the libertarian claims that all sovereignty should lie in the individual. Society, if it even makes sense to call it that in this context, is then a jumble of monads—individuals disconnected from each other and collective action. In this anarchic situation, the libertarian or anarchist, like a totalitarian leader of a state, is immune from criticism and devoid of responsibilities and accountability to others. It is an empty and false view of freedom. In reality, freedom is a dynamic among people; freedom is never not contingent upon other people unless you live in a cave far, far away. We live in a shared reality, a society in which cooperation and mutual recognition is essential to freedom.

Libertarianism ignores all of these realities in favor of its “if only there were no rules” fantasy of solipisistic  autonomy. In this way, political libertarianism is right-wing because it would inexorably result in a “might makes right” anarchical concentration of power, both economic and social, in the hands of a few strongmen who, without any social structure to circulate power, would be free to be autocratic oppressors. This is the anarchy of what Hobbes called the “state of nature,” that he properly condemned as nasty and brutish. There will always be the active potential for people to abuse power; therefore, libertarianism and anarchism are absurd to pretend that we have no need for social mechanisms to limit abuses of power. The dual axis scheme attempts to distract from this absurdity by creating a false dimension.