The U.S. Has Found Something Worse Than Trump
Skip to content 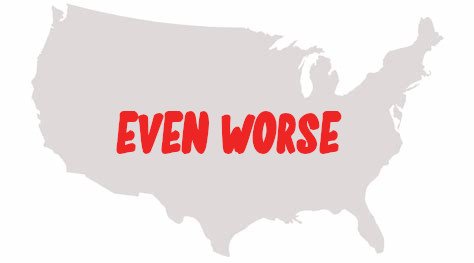 Yes, Trump is a horrible human being. Yes, Trump’s policies are horrible. But as I’ve written previously, Trump isn’t the problem. There’s a problem worse than Trump, and the U.S. has just made that problem worse.

“Feckless” is a good word, meaning weak, ineffective, and worthless. “Feckless” is the perfect word to describe the election campaign run by the Democratic Party this year. There are two ways of looking at the Democrats’ feckless campaign: they are either spectacularly inept or they deliberately lost. The latter is in the realm of conspiracy theories, a realm I avoid, so barring evidence of conspiratorial tanking, we have to accept that the Democrats are weak, ineffective, and worthless.

Why is feckless the right word?

Running against Trump was like playing against a last place team who just lost half of its starting line to injury. The Democrats may eek out a victory for the White House, but they fell well short of their goal to capture the Senate, LOST seats in the House, and performed weakly across the board in state elections. But The Squad won: more on that later.

Why did the Democrats fail?

That’s the right question and that’s the thing that’s worse than Trump. There’s a term that’s underused in academia and largely unheard outside of it: “oppositional politics.” Exactly as it appears, the term refers to a politics centered on opposition to others. Used by political leaders throughout the centuries, oppositional politics defines a perceived enemy and rallies followers to contain or eliminate that enemy. Oppositional politics is a favored strategy of totalitarian regimes. It’s an unfortunately successful strategy because it’s easier to blame others and be against them than to be for something and work to make things better.

Trump is a quintessential example of oppositional politics. From the beginning he has defined his presidency in terms of opposition to perceived enemies: Muslims, immigrants, foreigners in general, racial minorities, and of course, Democrats. The catchphrase “Make America Great Again” superficially sounds like a positive message, but it isn’t even a veiled politics of opposition. Quite blatantly, Trump’s proposed means of making America “great” is to fiercely oppose the perceived enemies of America, many of whom are Americans.

The Democratic Party’s election strategy was as simplistic as Trump’s: make America great by fiercely opposing Trump and other Republicans. Beyond vague platitudes, Biden and his surrogates offered few if any positive policies. “Trump is Bad” was the message. Well, duh, Dems, what you got for us instead? No answer. Just more “Trump is Bad.” The Democrats tried to counter the Opposer-in-Chief with fiercer opposition rather than offer a positive agenda to supplant Trump’s politics of opposition.

Biden went so all in on his “Trump is Bad” rhetoric that he successfully avoided almost any mention of his policies, which are, in truth, rather similar to Trump’s. Sorry, I won’t lie to make some of you feel better, he’s GOP-Lite with a tamer Twitter account. One of the most honest moments in the campaign was Biden telling a group of rich people that “nothing will fundamentally change.” That’s probably why the Democrats avoided talk of policy.

The problem is, you can’t try to outdo someone at something at which they are an expert. Trump does one thing very well: spew opposition. He’s had a lifetime of refusing to accept responsibility and blaming others. Why oh why did the Democrats think they could beat him at that game?

Opposition to opposition is not a positive movement just like two wrongs don’t make a right. There’s an old saying that all that evil needs to prosper is for good people to do nothing. But evil can really prosper when good people respond to evil with more evil. The macho brute force of mowing down the bad guys is the stuff of b-grade action movies. Biden is no Rambo, but he’s also not the uniter that the nation needs. A constant litany of complaints about Trump and Republicans was the Democratic strategy. The answer to Trump’s divisiveness is not more divisiveness.

The Democrats played into Trump’s hands. He thrives on division and the blame game. The Democrats complied. Rather than offer a positive message as an alternative to Trump’s divisive oppositional politics, the Democrats effectively accepted that divisiveness. They elevated Trump as the perceived enemy and engaged in oppositional politics. They tried to outdo Trump in being Trump, which was just evil countering evil. And of course, some will retort that Dems “weren’t as bad as Trump,” to which I reply that you really need higher aspirations than simply being better than Trump. The only thing worse than evil is to respond in kind.

The Democratic party’s strategy didn’t work. Even if they eek out a win on the presidency, they failed. The U.S. has about 240 million eligible voters. Biden received about 73 million votes. That means that nearly 70 percent of the people who could vote for Biden didn’t vote for Biden. Saying that a slightly larger number didn’t vote for Trump misses the point. In the face of the disaster of the Trump presidency, nearly 70 percent of Americans still didn’t buy the Democrats’ oppositional politics. Perhaps if the Democrats had offered a positive message instead…. but we will never know. The golden opportunity offered by the worst ever presidency to fundamentally renew America is lost.

Yes, The Squad won. Progressives won where they were allowed to be on the Democratic ballot. Candidates who offered a positive, progressive vision fared rather well. The Squad and other progressives reached out to voters offering more solidarity than opposition. Establishment Democrats will poo-poo these facts, writing them off as aberrations or “won’t work in white districts” blather and adding that “Trump is Bad.” Of course, these Establishment Democrats oppose progressive policies.

Well, Establishment Democrats, how well did trying to convince white soccer moms that Trump is Bad work? Consider the real possibility that nearly 30 percent of Americans agree with Trump and you will never peel off enough of their support to matter. Consider also the fact that demonizing that 30 percent didn’t work either. Consider instead that the way to motivate the other 70 percent of Americans is to offer them a positive alternative to Trump’s oppositional politics. Is it really that difficult to be for something?

As we enter another four years of weak and ineffectual government, Americans will suffer as the rich get richer. Oppositional politics will continue and it will make things worse. America does have a positive alternative, but both major parties oppose it. Opposition for the sake of opposition. That’s worse than Trump.