Understand that Nazis were not Monsters
Skip to content

Philosopher Stanley Cavell is correct: we must understand that Nazis were not monsters.
Ridiculous you say?  Yes and no.
We must first understand what evil is. Hear me out. 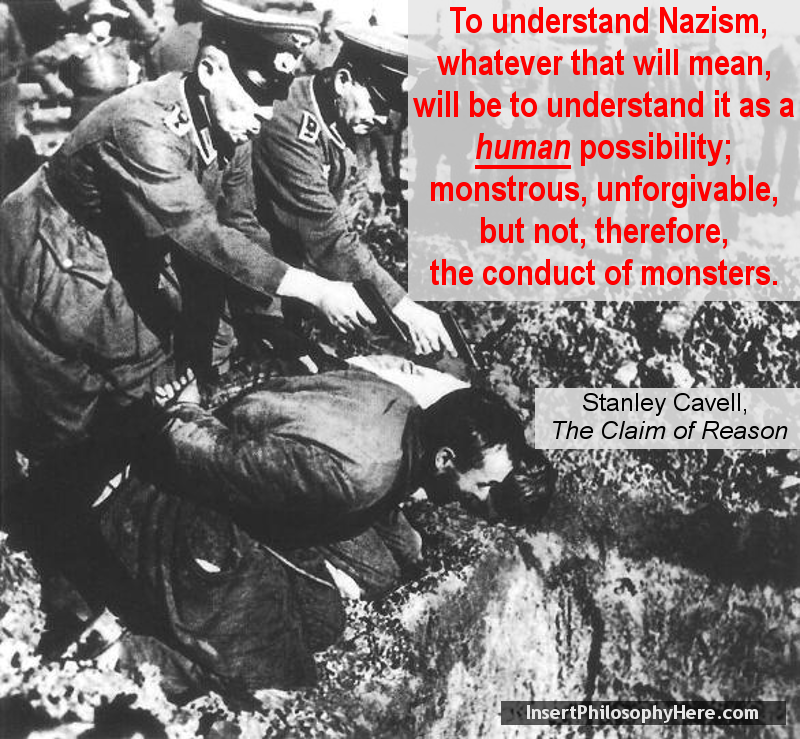 “To understand Nazism, whatever that will mean, will be to understand it as a human possibility;
monstrous, unforgivable, but not therefore the conduct of monsters. Monsters are not unforgivable.”

This is a difficult quote. Difficult to understand. Hard to accept. Yet, we must accept its wisdom. As, my university ethics professor taught us, “if you cannot condemn Hitler as evil, you need to start again with your ethical system.”  Cavell unequivocally condemns Hitler and Nazism as evil, but he wants us to be clear on what we mean by condemning Nazism as evil and that we cannot condemn them if we call them monsters.

Stanley Cavell (1926-2018) was one of the great philosophers of our time. Too many academics throw themselves into narrow niches of study. Cavell took on all of human culture and applied it to philosophy and applied philosophy to all of human culture. Cavell was most concerned with how we can be a society that promotes conditions for open, free dialogue through which we can both make sense of our lives and allow each other to flourish. He believed that we have a flourishing society when every individual has the freedom and wherewithal to embrace and develop their own unique feelings and aspirations.

A part of flourishing, Cavell argued, is to be clear about our thinking and our terms. That’s why this quote about Nazis in his book The Claim of Reason is important. Cavell wants us to have a clear moral relation to the Nazis and their atrocities so that we understand what their evil was and how to counter it.

For Cavell, that means we avoid the temptation to say that the Nazis were monsters. Their actions were monstrous. But they were humans, not monsters. This is important for two reasons. One is that a monster is not evil, just like a hurricane, earthquake, or wild animal is not evil no matter how much death and destruction it causes. We can only call evil a human being who willfully and consciously acts against others. Monsters are neither unforgivable nor forgivable. To cast the Nazis as monsters is to move them beyond evil and therefore beyond condemnation.

Two, it is very important to remember that the Nazis were human. They share our DNA. They were born as we were–a child to parents within a culture not radically different from our own. Those children grew up and used their human free will to make choices–unforgivable choices–but choices that any human being given the wherewithal to act on them could potentially make. Yes, even you.

Seeing evil as a human possibility is necessary for justice to make any sense. Cavell says that “morality is not designed to evaluate the behavior and interactions of monsters.”. Morality, justice, respect, vengeance, and love depend on seeing them all as possibilities that a human being can choose to embrace or shun. For example, Cavell says that we can morally condemn slavery only when we can admit that slavery is a way that certain humans beings can treat others who they know to be human beings. Then, the moral issue is within our realm of human justice and we can make a moral judgment on slavery.

If we classify the Nazis as monsters, we move them beyond the reach of our judgment. Worse, we pretend that Nazism was some aberrant force from outside our human community. The internal relation that we must have to Nazism is to understand it as one manifestation of the human possibility of inhumanity toward our fellow human beings. To do otherwise is to be willfully blind to history and ignorantly deny the real possibility of Nazism reemerging in our midst. Human inhumanity to other humans, Cavell says, “is too close to something we might at any time discover.”

Another philosopher’s take on this topic: Martin Shuster – “Internal Relations and the Possibility of Evil: On Cavell and Monstrosity”