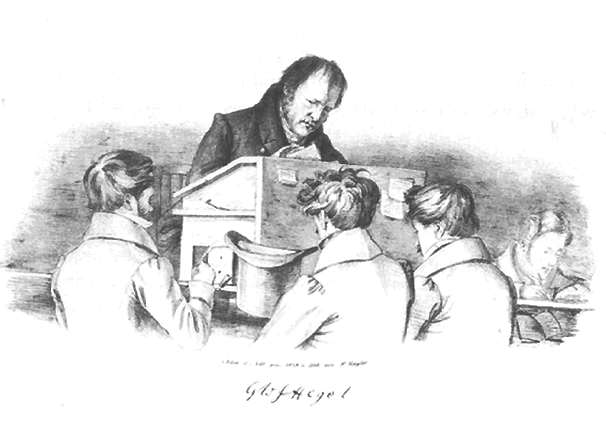 It is a bit of an exaggeration to say that in the last 100 or so years there has been a war in philosophy. But if we can describe the long “analytical/continental” divide in philosophy as a war, Hegel is at the foundation of one side of it. Hegel produced an all-encompassing system that still incites passion among philosophers, some of whom lack a thorough understanding of Hegel. To call someone a “Hegelian” is, depending on who is saying it, high praise or an insult. Few, if any, today are true followers of Hegel’s system, but his philosophy has influenced much of what is called “continental” philosophy. Understanding Hegel helps understand some of the issues in continental philosophy that developed in response to Hegel.

Hegel was a Prussian philosopher who followed in the footsteps of Kant but took Kant in a different direction. Some say Hegel is even more difficult to understand than Kant. I don’t agree with that, which is not to say that understanding Hegel is a walk in the park. If you break Hegel down into two main components of his thought, he is more manageable. So here are two thoughts that can help you begin the long road in understanding Hegel. The first part is understanding Hegel’s philosophy as a system to understand human freedom in terms of history and the political state. The second part is his theory of interpersonal relations, centered around the concept of recognition.

On the first part, I suggest this way of looking at it. Hegel’s system has four main ideas:

1. History is the dialectical process by which Spirit comes to know Itself and realize It’s Idea.
2. Freedom is the idea of Spirit and Spirit is reason in and for itself.
3. The means of this realization is the passionate individual as subject and object of history and its expression is the state.
4. The national spirit is a moment in history as world spirit.

Yeah, “what the heck?” huh? Let’s break down these ideas.

1. Hegel thinks that everything, and I do mean everything is Spirit trying to understand itself. Don’t mistake “Spirit” for the monotheistic conception of god with whom we interact and cares about us. Spirit is more like Aristotle’s Unmoved Mover except Hegel believes it has consciousness and intellect.  It is also similar to Berkeley’s philosophy that everything is in a cosmic mind. For Hegel, we are all parts of a cosmic matrix that is a mind/spirit trying to understand itself and everything is a part of it. This idea inspired the Matrix films and Hitchhiker’s Guide to the Galaxy.

2. Freedom was the final cause (in the Aristotelean meaning) for Kant–everything in his philosophy was to try to establish the importance and reality of human freedom. The same for Hegel, except Hegel didn’t believe in individual freedom as we would understand it. The final cause of the world is for Spirit to realize Itself as reason itself and this realization gives it freedom. That’s freedom for Spirit, not so much for us. That is because…

3. You are the subject and object of history. This is crucial in understanding Hegel. You are the subject because you are an active participant in history. Your actions contribute to the unfolding of events. You are the object of history in that history happens to you. You are a part of that matrix of historical events that is Spirit trying to realize its Idea. For Hegel, realizing your role as a cog in the machine is the realization of your freedom and the fullest realization of this is understanding your role in the state. Yes, the political nation state. Your freedom is realized in the state. If you are an American, your freedom is as a good American. Hegel wrote that “The I is a we and the we is an I.” You are you in the context of your society. This makes sense, when you think of it, because though you are an individual with your own mind and thoughts and feelings, you are defined more than anything else by your relations with others and the society around you. Your life history of friends, family, community, and learning and your reactions to them define who you are. This idea from Hegel, inspired by Kant is accepted today by every academic worth anything. Hegel’s distinctive understanding is that human interconnectedness is primarily expressed as the nation state. Your freedom and identity is realized in being a good patriotic member of your nation.

4. That is because Hegel believed that nations are the only real individuals in history. You are insignificant. The nation is significant. And Spirit works out its Idea on the grand stage of interactions of nations. History is the progressive working out of that idea. What Hegel called “the march of reason” through history is Spirit learning and developing through history as it manifests its reason through nation states. Hegel further said that on Earth at any given time, there is one nation that most exemplifies Spirit and its Idea. That nation was the greatest current flowering of culture and reason. It once was Ancient Greece, then the Roman Empire, and so on. In Hegel’s time, he saw the Prussian Empire as that manifestation of Spirit. Understandably, the Prussian Empire was friendly to Hegel’s philosophy.

All of that fits well with the second component of Hegel’s philosophy: recognition. Understanding Hegel requires being clear on what he means by recognition. Hegel uses a German word that does not have an exact match in English but is translated as “recognition.” In English, recognition has two meanings. One is to identify something–“I recognize that object is a tree.” The second is to acknowledge something as having value and legitimacy–“I recognize you as a student and treat you as a student deserves to be treated.” It is this latter definition, to respect and value something, that is the sense that Hegel means.

You are defined by your relations with others. To have successful, healthy relations with others you need the acknowledgment and approval of others. You are not a friend unless someone recognizes you as a friend. Hegel realized that we are all dependent on recognition from others. Think about any label or idea as which you can identify yourself: friend, student, citizen, and so on. You cannot meaningfully be that unless others acknowledge you as that so you are dependent on them for your identity. You cannot say “I am a student at State College” unless the College recognizes you as such. Equally, you are not someone’s friend unless they recognize you as a friend. Every single relation you have, every social identity you have, has a similar requirement. This includes even simple things like being a nice person or a attractive. You are not such unless others think you are. That is why we stress out so much about how we appear to others. This is also why recognition is the key to social conflict and social justice.

That leads to this video which explains this concept of recognition.

Hope this helps you in understanding Hegel.