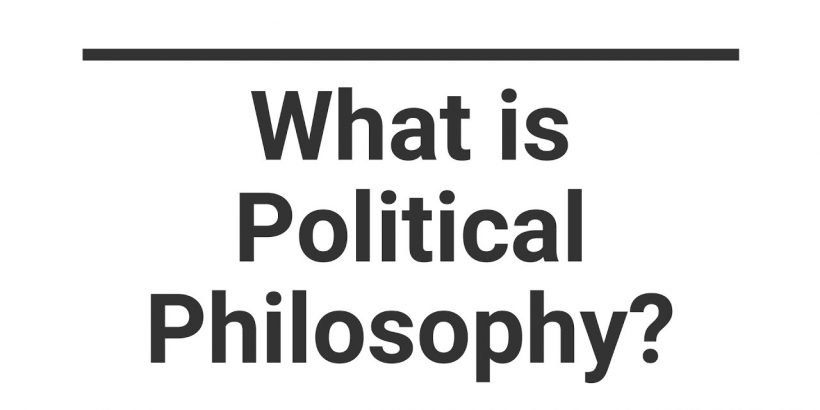 What is Political Philosophy?

The point I’m trying to make here is that when we talk about political philosophy is that we strangely aren’t talking about Politics. Politics we all have a certain sense of what that means, and it tends to be pretty ugly. Mostly just people shouting at each other and behaving like animals more than human. That’s ironic because what the word “political” really should mean is a sense of community.

The word “political” is one of the words that comes from the ancient Greek word “polis” which simply means “the city.” So, polis relates to political, and all things political are related to all things about the city or society because of course the Greek civilization mostly thought in terms of the city-state. So from polis we get the idea of politics and we get the idea of police and we get the idea of the suffix of a city in words like “metropolis” and names like where I’m from, “Minneapolis,” which is the name of the city of many waters. So, what “polis” has come to mean for us today is anything related to the idea of government and society.

We of course also have the word “social” which comes from Latin, which basically has to do with the sense of community, and we can talk about social philosophy as the philosophy of human interactions. That’s slightly different but overlapping with political philosophy, which has to do with things about government and political power. Politics itself is about the governmental structure and of course the winning of elections and gaining power and of course, playing politics which is a whole other nastiness. But in political philosophy, we don’t really deal much, if at all, with questions about the actual structure of a political state or how elections are won. That is in the realm of what is called “political science.”

As Strauss very adeptly points out, political activity is dependent on the idea of the good. One of the important thoughts, which are fairly ignored by political science because they are only interested in the nuts and bolts issues, because they are science, not a philosophy, is the very important reality that people who are involved in politics, however they are involved, are all guided by an ethical sense of what they believe is good —the ethical good — and that is what motivates their actions. Politics of course has always been (though seemingly especially today) dominated by just yelling at each other and demonizing your political opponents. The reality is that both sides of the people in the shouting match are believing that what they are trying to do is good — ethically good and ethically necessary.

As I am saying this right now there is a rather contentious election going on in the United States, and both sides think that the other side is completely evil and that they’re completely good. Funny how they both believe that with complete sincerity. Nevertheless, what we as philosophers can do, and need to do, is look at this and say, “okay, yes, both sides do believe that they have the good on their side.” This is what human beings do. and we have to keep that in mind as we are talking about politics and talking about society.

So, when in politics and in political philosophy, we talk about such concepts as justice and rights and liberty, we should be reminded that, oh hey, yeah, Plato talked about these things didn’t he? It’s popular to just say, “Plato. Oh, he’s a weirdo. I don’t like him at all.” And yet he is framing the debate that still happens today. He first identified these very important concepts: justice, rights, the good, liberty. These are concepts that transcend any particular philosophy or philosopher and transcend any particular political party or movement.

When Strauss mentions that we’re looking for something that is no longer opinion but knowledge, there is the sticky wicket of when did we really have knowledge as opposed to simply an opinion of what is good, what is justice, what are human rights? These are the questions that political philosophy tries to deal with. Plato tried to answer these questions. Aristotle tried to answer these questions, and now the philosophers that we’re dealing with are trying to deal with those questions.

But we’re dealing with this question of what is political philosophy now as opposed to when we were talking about Plato and Aristotle. There are some changes going on here in the mid to late 17th century and into the 18th century. The political order has broken down. I mentioned in my video lectures on the medieval period in the renaissance period that political power was being transformed by events going on in the world. Philosophy is best when philosophy reacts to changes that are going on in the world. Philosophy helps us to explain and understand change. As political values and institutions change philosophy needs to reflect on that and take these changes into consideration of the discussion of what are we talking about when we talk about justice and rights and liberty and so on.

One of the chief changes that philosophy of this period had to deal with was this sudden change that political power changes. Not just in terms of who is the king this year, but in terms of how the structure of political power can itself change. When you look at some of these philosophers in this period of time (the 1600s), keep in mind that one of the things that they are trying to answer is the question of what does it mean for political structures to change? Why and how do political structures change?

Again, as I mentioned in the lectures on the medieval and the renaissance period, the idea that political power was static, just like the universe itself was static, was a very old and ancient idea. It wasn’t just Plato. It wasn’t just Aristotle. It was an idea embedded within human society, and not just western civilization either. But in the mid-17th century, you could see the structures which had been assumed to be inviolate were changing, and of course, that was nothing compared to what was about to happen in the 18th century.

Philosophers like Hobbes and Locke and Rousseau were prescient in seeing how these things can change and why these things can change. Looking at these three philosophers, we see three very interesting and different approaches to these questions of what is political power, what is a political structure, and of course, what are we meaning by rights, liberty, and justice? Their struggles with these questions still reverberate within our world today. We can still see Hobbesian, Lockean, and Rousseauian ways of thinking about political society and acting within political society. Those three different approaches, thus leading to three different sets of answers, is something that is very important for you to keep in mind when you are thinking about these philosophers and thinking about philosophy and of course thinking about society and politics in our world today.

Why are we still arguing about everything? Because as Strauss wisely points out the quest would not be necessary if knowledge were immediately available. And it’s not. Not just in terms of politics but in terms of everything. The conversation of philosophy is continuous because knowledge is not that easily obtained. And of course, and here’s the annoying thing, the knowledge keeps changing because reality keeps changing. Therefore you, as a philosopher, as someone with a philosophical mind, needs to constantly adapt and change to the changes in your world

So, then, back to the question, what is political philosophy? We are trying to deal with these questions of change in political and social structures: why they change, how they changed, and what is the meaning of those changes? And that is central to the question of just about everything else that matters — that truly matters in human life.