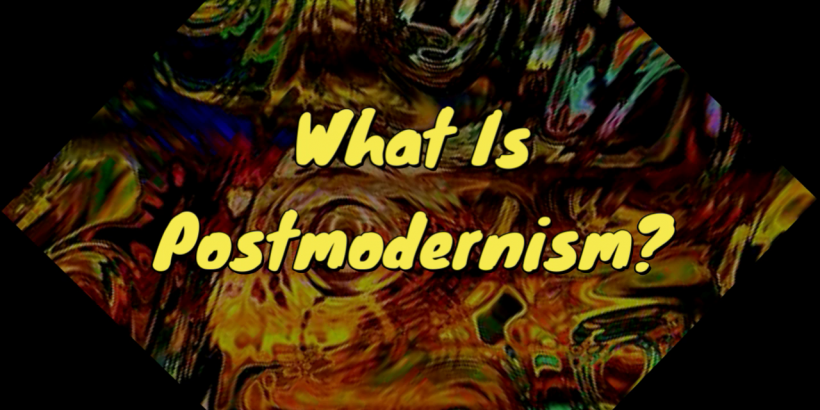 To understand postmodernism, we first need to understand the term and concept of “modern.” Well, the word “modern” basically means something that is current contemporary, but most especially it means something that is new or newer, with the implication that it is better than the old. Modern architecture, modern art, modern times, modern English as opposed to Old English, and on and on and on. Modern means contemporary, newer, and yes, better.

Different areas of human culture use this term “modern” to denote different eras of what is considered modern and the term is completely relative to whatever cultural era you’re talking about. For example, modern art and modern philosophy occur in different centuries. Modern art is a 20th century movement, but in philosophy the modern era is considered to have begun around 1600, the 17th century. Philosophers active from the time of Rene Descartes to the time of Immanuel Kant are often referred to as early modern philosophers, and the post-Kant period is modern philosophy in general.

This concept of modernity is associated with the Enlightenment and the Enlightenment worldview. Loosely defined, this enlightenment worldview is that there is one true picture of reality that humans can know through reason and science. This is a worldview that sprung up in the 1600s with people like Francis Bacon, but especially with Renee Descartes and this concept of the rational knowing mind as the source and ultimate judge of all ideas. Both Bacon and Descartes had optimistically predicted that once human beings start to think perfectly, rationally, and deliberately that they would know everything, literally everything–all human problems would be solved, all knowledge of the universe would be understood, all through the use of calculated logic, reason, and the scientific method.

And yes, Francis Bacon did develop the modern scientific method. And yes, Descartes developed the basic principles of scientific rationalism. The Cartesian dream of the knowing rational mind, as long as we think correctly, is the modern worldview, and modernity is the firm faith that collectively, rational thinkers are continually discovering theories that increasingly better describe reality. From this assumption, modernity has an extraordinarily optimistic view of human progress driven by rationality. Today, analytical philosophy remains an example of this modernism, this modernist worldview.

Postmodernism, then, is the name given to a loosely connected group of thinkers united in their opposition to modernity and its assumptions of the supremacy of reason and continual human progress. Now, this does not mean that these philosophers are opposed to progress or do not want to improve the human condition. What they oppose is modernity’s simplistic categorization of reality and modernity’s empty faith in social and intellectual structures.

Postmodern philosophers are engaging in a critique of modernist assumptions about truth and reality. They are doing what philosophers should do: seeking the fundamental principles that lie beneath the surface of cultural conventions.

There is a bewildering array of postmodernist intellectuals. Their postmodern tradition–though they would likely object to being called part of a tradition–is based on the observations and arguments of philosophers like Friedrich Nietzsche, Max Scheller, Martin Heidegger, and the later philosophy of Ludwig Wittgenstein. Those previous philosophers were inspired by the tradition of unmasking the pretensions of rationalism and the illusions of dogmatic speculation that had long percolated within philosophy. The postmodernist philosophers were exposing the illusions of modernity’s dogmatic speculation.

Postmodernists forcefully believe that the modernist dream of discovering the central set of rational categories for understanding reality is dead. Nietzsche’s metaphor that “God is dead” applies to the death of modernity. We now must face our uncharted lives with no universal essences to which we can appeal or certainties on which we can base our lives. We are the products of history, as Hegel had said, but opposite of Hegel, postmodernists declare that history is a nonrational interplay of shifting material and social forces. It does not have a grand purpose. It simply is. What we can do is critically analyze or deconstruct the modernist dream, the modernist illusion of rationally knowable, objective truths to expose how modernity’s illusions arose, and why they seem so real. We cannot remain trapped within the false worldview of the Enlightenment.

Postmodernists call for philosophy as it is traditionally been understood to be torn down. That includes modern philosophy’s conceptions of epistemology, metaphysics, logic, and science. Postmodernism obviously rejects the approach of analytical philosophy, which prizes reason above all.

Postmodernism could be categorized as continental philosophy, with which it has significant cross pollination, but is probably more honest to consider postmodernism as detached from, if not opposed to, much of continental philosophy. Indeed, it is postmodern philosophy’s, constant critique, constant questioning and attacking of other assumptions, that give it much of its bad reputation of believing in nothing of desiring nothing. And yes, it does have to be admitted that certain people who would be considered postmodernist philosophers did kind of go off the deep end into declaring that there is no truth at all. But these philosophers are of little merit, and indeed, if you conjecture that there is nothing of value, then obviously what you say about it has nothing of value. The more substantial philosophers within postmodernism are engaging in that critique of modernity’s illusions, and its illusory structures, and in so doing, to sweep away the social constructions that are leading us astray, and thus we are then more free to understand how things actually are and how we actually are, because we are all colonized in one way or another by modernity and its assumptions.