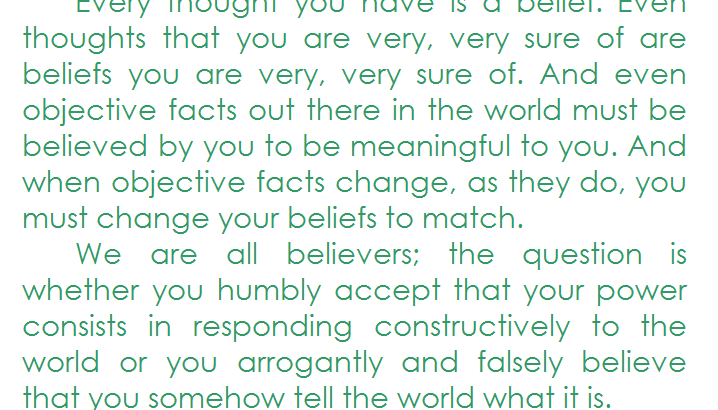 Humans are belief-motivated beings, and being human, you are your beliefs. Animals and plants act, but they simply react to stimuli without an understanding of the context of their actions or why they are acting.  Humans have ideas about things. Humans have desires, form intentions, and act on their intentions to fulfill their desires and to do that, they need to form beliefs about the world.

Some people believe that they don’t have beliefs. They don’t believe, they “know,” they say. Well, this is their belief, but it is belied by the facts. Setting aside for a moment the difficulty, if not impossibility, of proving you know something, what is knowledge?

What we call “knowledge” is just a type of belief, a belief that we believe we have a high level of evidence that justifies our belief in the belief. And yes, there are a lot of beliefs there. Such is life.

For centuries, philosophers believed that knowledge was “justified true belief.” They never denied that knowledge was belief (only a fool would pretend to believe otherwise), but philosophers wanted to say that we could consider some beliefs to be superior to others: beliefs we “know” to be true. Edmund Gettier demolished this belief when in 1963 he published a brilliant short paper entitled, “Is Justified True Belief Knowledge?” Go ahead and click the link, it will take you less than 15 minutes to read the entire paper.

Perhaps no paper in the history of philosophy has caused more discussion and uproar than Gettier’s simple little paper. It has spawned a cottage industry in creating examples that prove Gettier’s point. They have come to be known as “Gettier Problems.” Here is one of the better-known ones:

Suppose there is a county in the Midwest with the following peculiar feature. The landscape next to the road leading through that county is peppered with barn-facades: structures that from the road look exactly like barns. Observation from any other viewpoint would immediately reveal these structures to be fakes: devices erected for the purpose of fooling unsuspecting motorists into believing in the presence of barns. Suppose Henry is driving along the road that leads through Barn County. Naturally, he will on numerous occasions form a false belief in the presence of a barn. Since Henry has no reason to suspect that he is the victim of organized deception, these beliefs are justified. Now suppose further that, on one of those occasions when he believes there is a barn over there, he happens to be looking at the one and only real barn in the county. This time, his belief is justified and true. But its truth is the result of luck, and thus his belief is not an instance of knowledge. – Goldman, Alvin. 1976. “Discrimination and Perceptual Knowledge.” The Journal of Philosophy 73, pp. 771-791.

Some people who cling to the belief that they “have knowledge” instead of beliefs vent their spleens at the Gettier Problems. A weak comeback to the fake-barns problem is that there is a second level of verification. We can get off the road and look from the side and then we “know” whether it is a real barn or a fake barn. But that just moves the issue to a different set of data points and experiences. You now claim that this new belief you have is justified just like you claimed your earlier belief was justified. How do you verify that this new visual sighting is not fake?

Let’s get back to the point Gettier made. What you call “knowledge” is no more and nothing other than what you believe you are justified in believing. Certainly, some justifications are better than others, but you can never get past the reality that all you have are beliefs that rest on other beliefs and that there are beliefs all the way down. As a human being, your beliefs influence your desires and intentions and, therefore, your actions. Your intentions and actions form who you are so who you are is the collection of your beliefs.

On all subjects of debate the debate rages on with one belief fighting with the other belief. Such is life. But then, you are your beliefs. 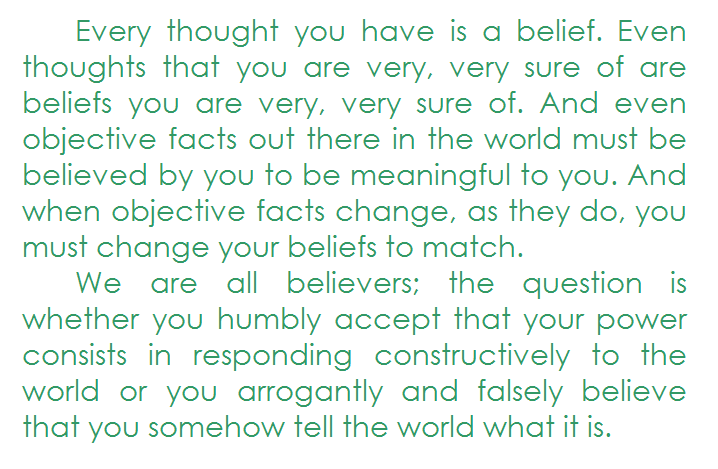