Why #CancelStudentDebt Is the Right Thing to Do
Skip to content 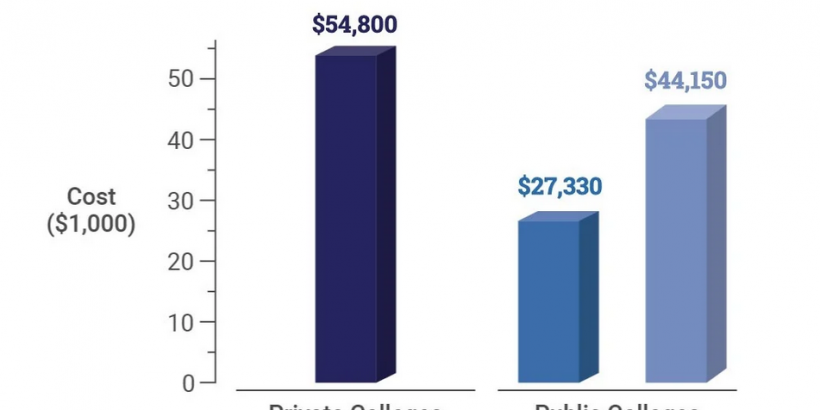 I’ve taught university courses since 1998. Someone born that year could have just graduated from a university. Chances are good that such a person has graduated with a heavy load of student loan debt. That is more than unfortunate; that is morally wrong.

Joe Biden promised that when he became president, he would cancel at least some student loan debt for all former students. He has not. That is more than unfortunate; that is morally wrong.

In the past 20 years, university tuition has increased 144% at private schools and 171% at public universities. (source) Those increases are multiple times higher than price increases in any other area of society. University students are burdened with price increases more than are average Americans.

Where does all that money go? Not to staff, who work hard but get low, if any, pay increases. It doesn’t go to faculty, because school administrations are increasingly using part-time faculty, “adjuncts,” who they pay one-half to one-third of full-time faculty. This, despite the fact that “adjuncts” have advanced degrees and qualifications and many years of teaching experience; they are still forced by the higher education system to live in poverty or near-poverty conditions. These underpaid adjuncts now teach one-third to one-half of all courses in higher education. These people aren’t benefiting from the huge price increases of university education.

Back to students: the above-mentioned cost increase is just looking at the tuition students have to pay directly to their school. There are also the costs of textbooks. The average textbook for a university cost now exceeds $80 each. Students now have to pay over $1,200 a year on textbooks. I could go on and on about how, in my opinion, textbook publishers are evil, but I will mention that profit margins for textbook publishers can reach up to 80%. That too is more than unfortunate; that is morally wrong.

Then there are normal living costs that every person must deal with. Students need a place to live, and they need to eat, have clothing, and all the other necessities of being alive. Some schools offer room and board, well, not “offer” so much as sell room and board to students. If students can get them (the supply is limited), they have to pay $1,000 to $1,500 a month on top of tuition and textbooks. But that still doesn’t cover all the expenses of living, which is estimated at another $3,000+ a year for students. (Source for the above statistics.)

Source: College Board, Trends in College Pricing and Student Aid, 2021.

Regardless of who gets the money that students are forced to pay to schools, the higher education system burdens students with ever increasing costs. Many students have to work two jobs while going to school full-time and still have to take out student loans. Here is what one student told me in an e-mail.

“I took up two jobs to financially support myself [while in school]. My main job is being a retail associate. I have been working 5 days a week and had 9-hour shifts.”

It shouldn’t be that way. A student should not have to work full-time in order to go to school. They should have the opportunity to devote themselves entirely to succeeding at school. Even if you want to argue that students should not be free entirely from working, forcing them to work 40+ hours a week while going to school full-time is an unfair burden. Just so you understand, a full-time university student needs to spend 25-30 hours a week in class and studying to do well in school.

Students look at the mountain of costs to get a university degree (well over $100,000 total plus living expenses), see that financial aid will, at most, cover half of the tuition costs, and have two choices: work themselves nearly to death while in school, or take out a student loan. And don’t try to pretend that earning a bachelor’s degree is optional these days, because everyone knows that there is a lot of truth to the constant message of “you can’t get a good job without a college degree.”

Many schools push loans onto students. They will send reports to newly admitted students reading roughly, “your total costs will be $30,000, $9,000 of which will be covered by grants and tuition waivers, and the remainder will be covered by student loans.” The message is, “See? our schools is affordable, all cost are paid for by aid.”

But a loan is not financial aid. Loaning money at interest to students isn’t aid any more than are car loans or mortgages. Loans are burdens.

Most people need to take out loans to buy a car or house. But we understandably frown on distributing large loans and mortgages to 18–22-year-olds without stable income or life experience. Yet, our society is mute to the problems created by distributing large student loans to those same 18–22-year-olds. I love my students, but they are young adults, some just kids, without the life experience needed to fully comprehend the consequences of their decisions. There are reasons why credit card companies prey on college students. We have laws that go a small way toward protecting young people from predatory credit card corporations. We have nothing to protect young people from predatory student loan corporations.

Yes, student loan corporations are predatory, facilitated by schools that want the income that the loans bring. Students are pressured, even coerced, into taking loans, made to feel they have no other choice but to take out huge loans because if they don’t, they can’t go to school, and if they can’t go to school to get a degree, they will never amount to anything.

Like credit cards, student loans are a debt trap. Students are kept in the dark as to what will happen to them after they graduate. The “student loan servicing” corporations exist for one purpose: to extract as much money out of former students as possible to pad their profits which are distributed to corporate executives and shareholders. Those corporations use multiple tactics to extend the life of the loans and force people to pay as much as possible for years on their loans. Most students will end up paying double, maybe more, of the cost of the loans they were coerced into taking.

And then there’s grad school. The costs go up, grant aid all but disappears, and the only option for students is more student loans. It’s a trap.

In some European countries, students are given enough financial assistance while they are at university that they don’t have to work. That is how it should be so that students can focus on their studies. Those students also graduate without debt. That’s how it should be so that graduates can focus on finding the right job and be free, to the best of their abilities, to contribute to society.

In grim contrast, the U.S. higher education system is a factory that produces debt servants (some will say “debt slaves” but let’s be more moderate for now). American graduates have to deal with the debt burden of student loans for up to 25 years after they graduate. That is more than unfortunate; that is morally wrong.

The perfect solution is, of course, for all university students to be able to focus entirely on their education and then graduate debt-free. If a university education was free to every student who could show academic qualification and remain free as long as they maintain academic performance—i.e., it’s not an entitlement—that would improve education and society as a whole. But in puritanical America, where the fear and loathing that someone else may receive a benefit remains strong, the idea of “free college” is anathema, even with academic requirements attached.

Regardless, the best solution is to cancel all student loan debt. ALL of it. That would right the wrongs that placed students in a debt trap, instantly improve the financial and personal well-being of millions of Americans, and instantly boost the economy more than any tax cut or government spending package. And it wouldn’t cost you or me a penny. Granted, some executives at the student loan corporations would lose their six- and seven-figure compensation packages, but they will be fine if they follow the same advice that they give to the former students they exploit: “set up a budget, make coffee at home, don’t go on vacations, don’t eat out, and so on …” And don’t try to argue that we can’t afford it, especially if you support the hundreds of billions of dollars tax dollars spent on “defense.”

I suspect that there are people in positions of power who don’t want university students to graduate debt-free. Perhaps they want to keep the current system that privileges students from wealthier families. Perhaps that’s why Joe Biden and the Democratic party have done nothing to alleviate the exploitative debt load placed on students.

P.S. – We also need to rein in the unwarranted cost increases of higher education, but that’s a whole other complex issue.

Who Is Profiting Off Student Loans?