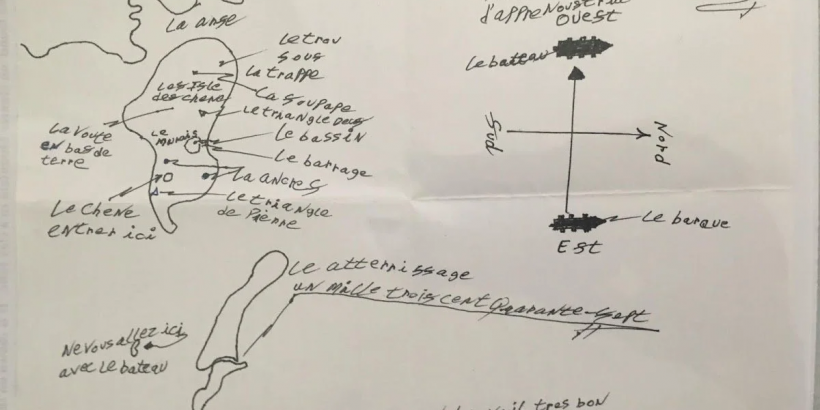 See also my update on the lie:

The Curse of Oak Island and the Templar Myth

The Curse of Oak Island is an interesting and entertaining show. But as I mentioned in an earlier video, the show isn’t always entirely upfront with us. This past week, the show turned from shading the truth to outright lying to us. In the episode, “The Master Plan,” the show resurrected the Zena Halpern map, revealed a few years earlier. The lie was the narration saying the map is dated 1347. The number one thousand three hundred forty seven does appear on the map, but it is not a date.

The writing in French before the number says “le atterrissage,” a noun meaning “the landing.” Under the number a line points not to Oak Island, but to what is now known as Frog Island. The clear meaning is “the landing one thousand three hundred forty seven is here.” What the number signifies is not completely obvious, but if it was a year it would signify that with “année” or the Latin “anno dominus,” especially if the map was made by a religious order such as the Knights Templars. Since everything else on the map is related to directions, the number 1347 must have something to do with navigation, and indeed 1347 is a good approximation of the number of toise (French fathoms) to the mainland, a distance sailors would care about, just as they’d care about the instruction, “ne vous allez ici avec le bateau” or “don’t go here with a boat.” The show blacks out that instruction to preserve the illusion that the number is a date.

Also, there are clear signs on the map indicating a date well after the 1300s. Underneath our number indicating the landing site is “les sud Indien travail très bon,” meaning “the south Indian work very good.” Whatever that means, the word “Indian” connected with North America is clearly 16th century or later. Similar with the dedication of the map “drawn for François La Rochefoucauld, a small glass of apprenticeship.” There are a bunch of François La Rochefoucaulds, all living in the 16th century or later. The show has made the connection with Jean-Baptiste La Rochefoucauld, who led the tragic naval expedition to Nova Scotia in 1746. Events connected to this expedition are possible candidates for the depositor activity on Oak Island, and compatible with verified dates for some artifacts found on the island, a good 399 years after the date falsely attributed to the map.